Round 14 Team of the Week - no dent in the Panthers

With some of the key players coming off Origin, there is no doubt there were some sore bodies on the field this week. That has affected our selections for the Round 14 Team of the Week. 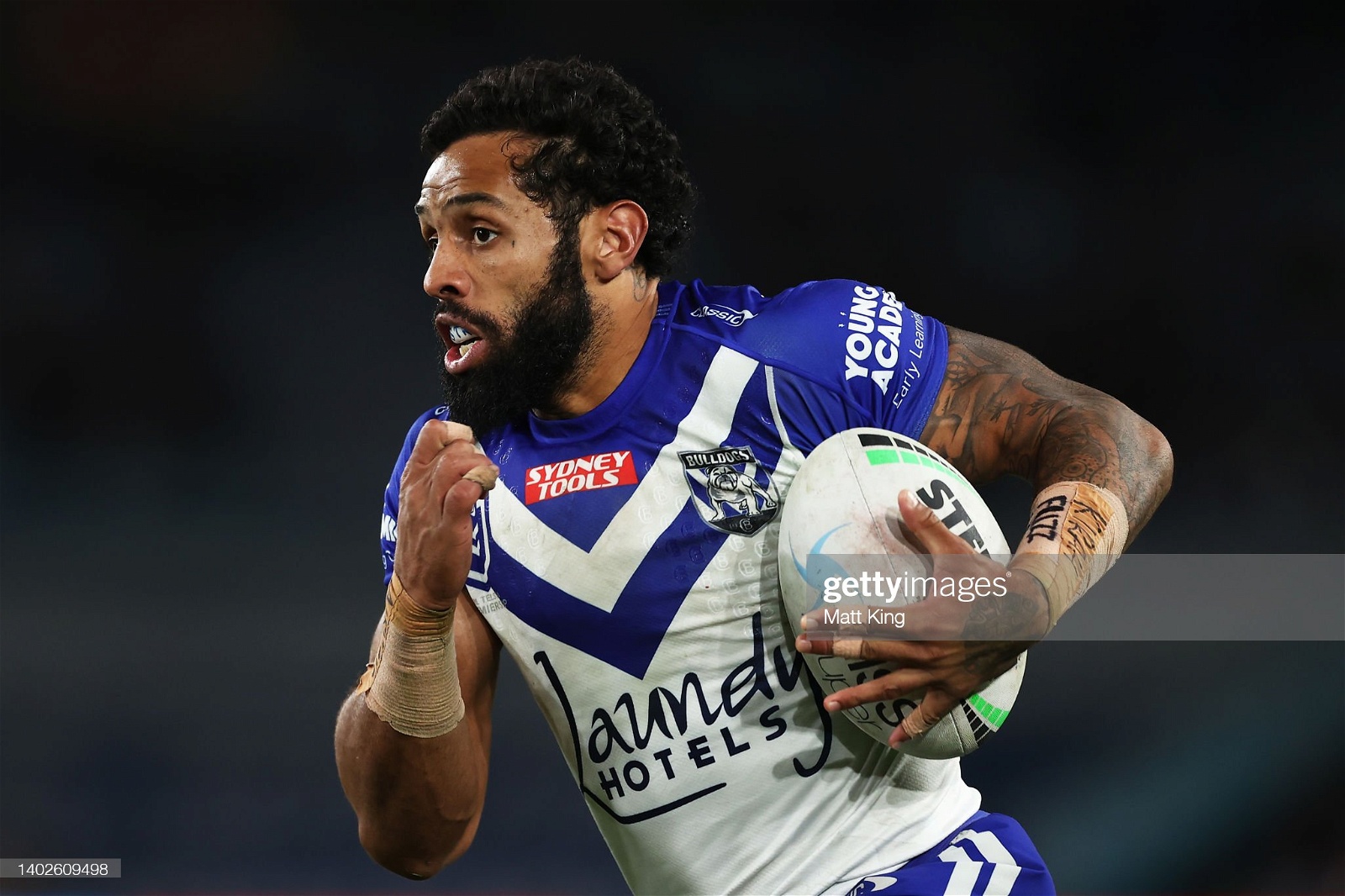 SYDNEY, AUSTRALIA - JUNE 13: Josh Addo-Carr of the Bulldogs makes a break during the round 14 NRL match between the Canterbury Bulldogs and the Parramatta Eels at Accor Stadium, on June 13, 2022, in Sydney, Australia. (Photo by Matt King/Getty Images)

It was a huge match for the Canterbury-Bankstown Bulldogs this week, with a smashing 34-4 victory over the Parramatta Eels. This win pushed them up the ladder over the Titans, so the team no longer holds the bottom spot.

Fullback Jake Averillo had an incredible moment in his interception and 80m run down the field in the 26th minute to score a try. His final tap of a try with 8 minutes to go solidified his excellence in this week’s match. Having just recently been moved to fullback from five-eighth, Averillo’s performance tonight shows he is adjusting nicely and deserves the spot.

The Rabbitohs’ had a convincing 30-16 win over the Titans. Leading all-time try-scorer Alex Johnston scored the eleventh hat trick of his career to reach 150 NRL tries, only the fifteenth player in history to do so.

Johnston scored all three tries off slick passes from his teammates. He stepped back in from the edge to score his twelfth try of the season off the back of a long cut-out pass from Cody Walker. He was quick to fire in the second half, extending the Rabbitoh's lead with a momentum-propelled try in the left corner thanks to quick passing from Cody Walker and Campbell Graham. With nine minutes to go, Johnston clinched his 150th try courtesy of another well-timed pass from Walker.

Campbell Graham was instrumental in the Rabbitohs’ aforementioned victory over the Titans, putting his name in the mix for a possible State of Origin debut in Game 2 of the series. Along with his slick pass leading to a try assist for Alex Johnston, the Centre made 18 runs for 203 metres. He also earned three Player of the Year points from the ABC Grandstand commentators for his outstanding performance.

The Storm claimed a 26-18 win in a back and forward match against the Roosters. Though NRL debutant Grant Anderson played as a winger in the match, his usual rugby league position is Centre and he deserves a place on this list. The Sunshine Coast Falcons flyer filled the shoes of injured winger Xavier Coates, having been signed by the Storm on a short-term contract to help fill the team’s injury void.

Anderson was filled with twos in the match: at 22 years of age he became player number 222 for the Storm and scored two tries in his emotional debut. He scored his first thanks to a beautiful pass from Felise Kaufusi in the 16th minute. He scored his second try in the 61st minute off a long floating pass from Jarome Hughes, making him the first debutant to score two tries at the SCG since Phil Smith in 1971.

The Bulldogs scored a surprise 34-4 win over the Eels, passing the Titans to climb off the bottom of the ladder. This was their first victory over the Eels since 2018 and the most points they’ve scored in a game in four years.

Josh Addo-Carr scored a hat trick to prove that he deserves to be in contention for a NSW Origin jersey, having been dropped in Game 1 in favour of the Roosters’ Daniel Tupou.

Addo-Carr capitalised on a pin-point accurate kick from Matt Burton behind the Eels’ defence, catching it on the full and running 10 metres to score with no Eels in sight. Combining again with his five-eight, Addo-Carr scored his second try off a Matt Burton grubber. Addo-Carr completed his hat-trick by intercepting a Clint Gutherson pass and racing 65 metres to cross the line.

Luai’s solid runs and passes in Round 14 showed exactly why he’s a fan favourite. Some strong stepping and strategic moves including his pass back to Cleary in the 4th minute, which resulted in the Panther's first try of the night, go to show his determination after a tough Origin loss last week.

His energy and drive from losing last week’s Origin match pushed him to be a well-rounded player this week, playing a great supporting role in the Panther's victory against the Knights.

It was a massive win for the Panthers in Round 14, with a whopping 42-6 victory over the Newcastle Knights. Halfback Nathan Cleary had an overall great game, scoring a try in the first 5 minutes and clearing 6 out of his 7 conversions.

Cleary’s strong attack and quick-thinking moves gave the Panthers a solid lead in this game, particularly with his huge 40-20 in the 26th minute. His penalty goal at the end of the first half solidified his excellence in this round. Cleary’s consistency and skill continue to shine, despite a tough Origin loss last week.

Tapine was a huge source of production for the Raiders in this round. Despite his side’s losing efforts, he was one of the best players on the field from either side. With 243 run metres and 33 tackles, Tapine filled a key role in keeping the game close between the Broncos and Raiders.

Scoring and efficient in defence, Reece Robson was one of the many stars of this round’s Cowboys side. With 50 tackles, he was the backbone of the Cowboy's defence, playing a key role in keeping the Dragons off the scoreboard for the first half. Robson has been an incredible defensive player all season and has helped the Cowboys in their unexpected premiership contention.

After a messy departure from Wests in 2020, Josh Aloai had a point to prove against his former side. That he did, with some spectacular play with the ball. Scoring twice, and running for 224 metres, Wests were unable to find ways to stop their former player, especially playing down a man. Aloai’s performance, alongside his teammates, continued to keep finals hopes alive for his Sea Eagles side.

With all their success this season, it’s not surprising that numerous Panthers players are regular features in the team of the week. With a try and 24 tackles, Kikau was another cog in the well-oiled Panthers machine, determined to show that they could still win over the origin period. In addition to his own try, his playmaking also set up another try for the team.

Olakau'atu came into this round with many questions asked about if he will be representing Tonga or New South Wales in upcoming representative matches. Whichever side he does choose to represent would find themselves incredibly lucky to have him. A try and 170 metres of running will surely make both sides even more desperate to have him represent them.

The Brisbane Broncos had a close game against the Canberra Raiders this week but came away with a 24-18 win. The Broncos had a tough possession fight against the Raiders, holding 49%, however, the team was stronger in their completion of sets, at 86%.

Patrick Carrigan played a strong game, having the most tackles of the team this week, with 46 tackles total solidifying his efforts. Carrigan had a quick pass in the 38th minute, with the set ending in Farnworth’s strong try to put the Broncos back out front for halftime.