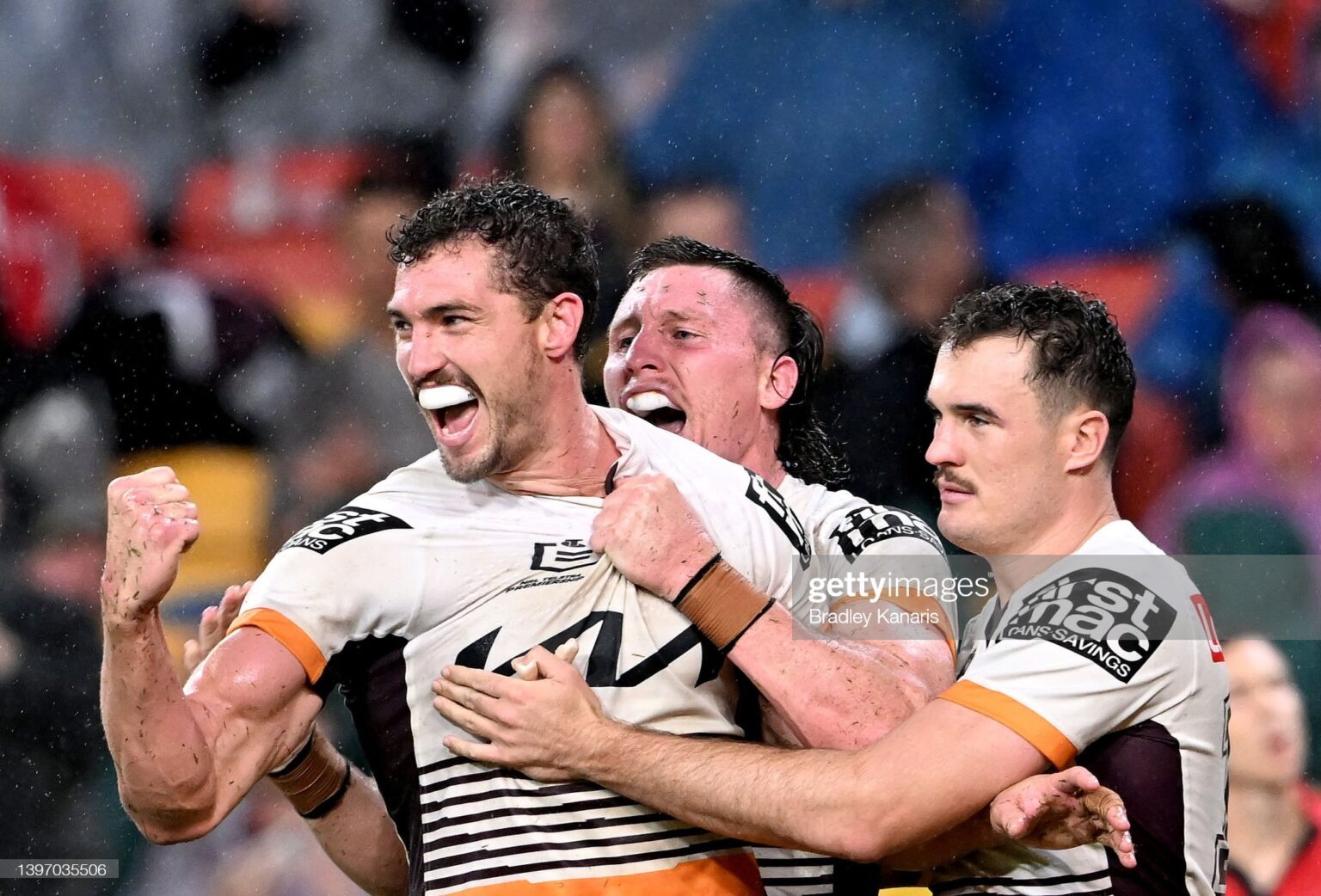 Who are the future leading all-time try-scorers? We look at which current players are likely to surpass former players' try-scoring records.

Who are the future leading all-time try-scorers? We look at which current players are likely to surpass former players' try-scoring records.

This is Part 3 of our NRL leading all-time try-scorer series, in which we investigate the future record-breakers. Of the 13 NRL clubs whose all-time try-scoring record is held by a former player, we think 7 could soon have a new record-holder.

Check outPart 1to discover the current players who already hold their club’s leading all-time try-scorer title. Delve deeper inPart 2, where we exploredthe records we think won’t be beaten by the closest current player.

After making his NRL debut for the Roosters in 2000 and playing for 2 seasons on the wing, Anthony Minichiello moved to fullback, earning him representative jerseys for New South Wales and Australia. The Italian International, now 42, scored 139 tries across 302 games and won 2 premierships with the Roosters in 2002 and 2013.

Debuting for the Roosters in 2012, Daniel Tupou is a three-time premiership-winning winger who has played 213 games and scored 125 tries. The Tongan International, 30, has represented Australia and New South Wales and was recalled to play in the first Origin match of 2022.

The 196-centimetre winger could reach new heights in 2023, only needing to play another 24 games at his current try-scoring rate of one try every 1.7 games to catch Minichiello. Comparatively, Minichiello’s try-scoring rate was one try every 2.17 games. Since Tupou only needs 14 more tries, it’s possible he could catch Minichiello in 2022. Regardless, given that he’s signed at the Roosters until the end of 2023, we’re confident Tupou will soon be crowned the Roosters’ leading all-time try scorer.

Matthew Bowen played 270 games for the Cowboys between 2001 and 2013, predominantly as a fullback. Now 40, he scored 130 tries and was the NRL’s leading try-scorer in 2005 and 2007, with 21 and 22 tries, respectively. He represented Queensland in the State of Origin and Australia internationally, before finishing his career playing for the Wigan Warriors in the Super League in 2014 and 2015.

Kyle Feldt, 30, debuted for the Cowboys in 2013 and has scored 111 tries from his 165 appearances. The winger scored the Cowboys’ most renowned try in the 2015 Grand Final against the Broncos, levelling the scores after the full-time siren and allowing the Cowboys to win with a field goal in golden point.

Feldt’s try-scoring rate is one try every 1.49 games, while Bowen’s was one try every 2.08 games. Based on his current rate, Feldt would need to play another 28 games to catch Bowen. Given that he’s signed at the Cowboys until the end of the 2024 season, we think it’s only a matter of time before Feldt catches Bowen. We can expect Feldt to achieve this milestone in the 2023 season, injuries permitting.

Steve Renouf, 51, played as a Centre for the Broncos from 1989 to 1999, before playing for the Wigan Warriors in the Super League to finish his career in 2000 and 2001. He played 183 games and scored 142 tries for the Broncos and represented Queensland in the State of Origin and Australia internationally.

Corey Oates made his debut for the Broncos at 18 years of age in 2013 and has scored 108 tries from his 183 appearances. The 27-year-old winger is the only remaining player from the 2015 Broncos Grand Final squad and has represented Queensland in the State of Origin series.

Oates’ current try-scoring rate is one try every 1.69 games, meaning he’d need to play another 57 games to catch Renouf, whose rate was one try every 1.29 games. Given that Oates is only 27 and he and the Broncos have found incredible form this season, we think Oates can easily achieve this feat; however, it will come down to his contract, which expires at the end of 2022. If the Broncos show Oates the same loyalty he has shown them over the years, the veteran will likely catch Renouf in 2023 or 2024.

Now 34, fan favourite Anthony Don retired at the end of the 2021 season, having debuted for the Titans in 2013 at 25 years old. The winger scored 85 tries from 152 games and was recongnised in the NRL’s academic team of the year, having attained his MBA on top of his undergraduate teaching degree.

Sami has scored 39 tries from his 80 appearances and represented Queensland in the Maroons’ successful 2020 State of Origin campaign. Having debuted for the Titans in 2017, Phillip Sami is already the club’sfifth highest all-time try-scorer at 24 years old. This is helped by the fact that aside from the Redcliffe Dolphins, the Titans are the newest NRL team and have little history compared to other clubs, having been founded in 1999.

Sami has a try-scoring rate of one try every 2.05 matches. He needs to play 94 games at this rate to catch Don, whose rate was one try every 1.79 games. Sami is currently sidelined with a knee injury but is expected to return to the field soon. Despite this, given that Sami is 24 years old and is signed at the Titans until the end of 2024, we think it’s likely he will catch Don; however, he needs to play just over three-and-a-half more seasons at his current try-scoring rate to reach Don’s record, meaning he'd need to commit to the Titans beyond 2024.

Rhys Wesser debuted for the Panthers in 1998 and went on to have an 11-year career with the club, before finishing with a three-year stint at the Rabbitohs from 2009 to 2011. The fullback played 178 games and scored 113 tries for the Panthers, including a premiership win in 2003, and was a Queensland State of Origin and Indigenous Dreamtime representative.

Nathan Cleary made his debut with the Panthers in 2016 at 18 years old and has since become one of the NRL’s biggest names, breaking many records. Now 24, the New South Wales State of Origin halfback and Panthers co-captain has scored 47 tries from his 130 appearances and is signed at the club until the end of 2027.

Cleary’s try-scoring rate is one try every 2.77 games compared to Wesser’s 1.58. Cleary would need to play 182 more games to catch Wesser’s record. Excluding the finals, this equates to just under seven-and-a-half full 25-game seasons; however, as the reigning Premiers, the Panthers are likely to continue their domination and make the finals in the coming years. Playing in the finals would give Cleary an extra few games per year to score tries, meaning he could reach Wesser’s record by playing as few as six-and-a-half more seasons. Cleary is signed for another five-and-a-half seasons until the end of 2027. While the stats suggest he’ll need longer than this to break the record, we think he’ll stick around at the Panthers to get there.

ORIGIN GREATS ENCOURAGE AUSSIES TO TEAM UP AGAINST BOWEL CANCER

Akuila Uate made his debut for the Knights in 2008, playing 161 games and scoring 110 tries for the club. Known as ‘Akuila the Thriller,’ the winger went on to play for the Sea Eagles in 2017 and 2018 before finishing his career with 2 years spent at the Huddersfield Giants in the Super League. Named the Dally M Winger of the Year in 2010, 2011 and 2012, Uate represented Fiji, Australia and New South Wales.

Kalyn Ponga began his career at the Cowboys in 2016 and 2017, before moving to the Knights in 2018. The 24-year-old has scored 38 tries from his 85 appearances for the Knights. A Queensland State of Origin representative, the Knights Captain and fullback is signed at the club until the end of the 2027 season.

At his current rate of one try every 2.2 games, Ponga would need to play another 158 games to catch Uate, whose rate was one try every 1.46 games. This is the equivalent of just under six-and-a-half full seasons, which goes beyond Ponga’s current contract. In saying this, we think it’s likely Ponga will catch Uate, especially if the injury-hampered Knights are able to find and maintain their form over the coming years.

Matt Cooper played 244 games for the Dragons from 2000 to 2013, scoring 125 tries. Now 43, the centre represented Australia and New South Wales and won a premiership with the Dragons in 2010. He has since had several reality TV roles, including on Dancing with the Stars, The Celebrity Apprentice Australia and Big Brother Australia.

After playing for the Raiders pre-NRL, Mikaele Ravalawa made his NRL debut with the Dragons in 2019. The 24-year-old Fijian-born winger has scored 41 tries from his 62 appearances for the Dragons and is signed at the club until the end of 2023.

Cooper’s try-scoring rate was one try every 1.95 games. Ravalawa would need to play another 125 for the Dragons at his current rate of one try every 1.51 games to catch Cooper. This is the equivalent of five and a half more seasons. Though this is well beyond his current contract, which expires at the end of 2023, at 24 years of age, we think Ravalawa has a strong chance of surpassing Cooper.

Why will they catch them?

Some players on this list are more likely to catch their club’s leading all-time try scorer than others. Equally, some have the opportunity to do this far sooner than others.

For Daniel Tupou and Kyle Feldt, it’s only a matter of time before they are crowned record-holders. For Corey Oates, Phillip Sami, Nathan Cleary, Kalyn Ponga and Mikaele Ravalawa, it’s all about their contracts. They are young enough to feasibly catch their club’s record-holder, but they need to stay at the club in order to do that. This comes down to not only the players’ loyalty but also the clubs’ loyalty.

There are many factors that will determine whether these players will become their club’s leading all-time try scorer. In essence, this list can be summed up with two questions: when will they catch them and will they be there long enough to do so? The thing we know for certain is that the talent is there, so it comes down to time and loyalty.