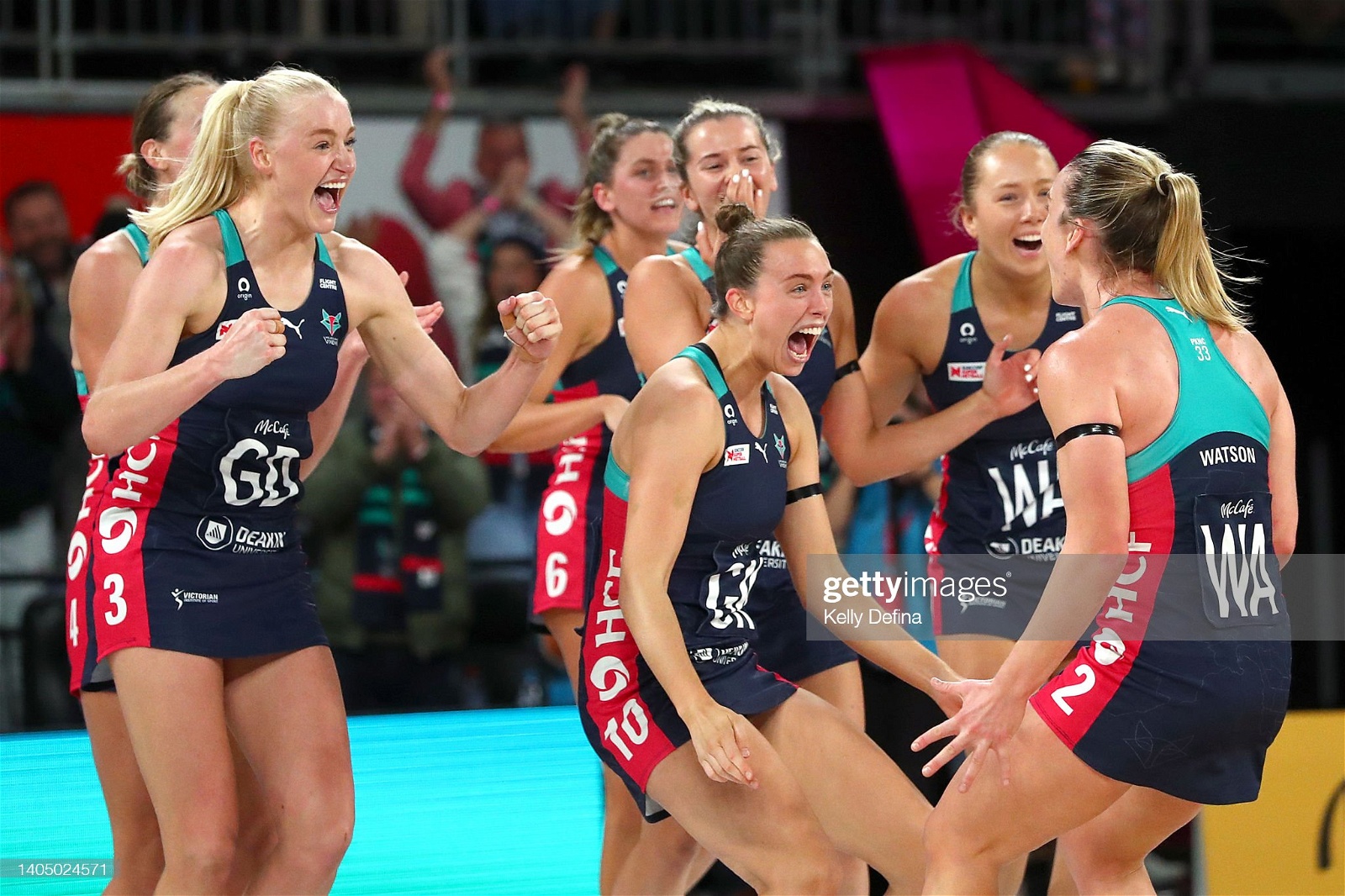 Minor premiers the Melbourne Vixens found another gear in the final quarter of the preliminary final, showing their class, strength and strategy to will themselves into the Super Netball grand final with a one point win over Giants Netball.

Minor premiers the Melbourne Vixens found another gear in the final quarter of the preliminary final, showing their class, strength and strategy to will themselves into the Super Netball grand final with a one point win over Giants Netball.

After a strong start to the match, the Vixens were put under pressure and rattled by the Giants' full court defence and super shot run in the second and third quarters.

However, defensive brilliance from Jo Weston and Emily Mannix gave the Vixens opportunities to eventually break through the Giants’ defence in the final quarter, to take the one point win, 55-54.

Weston was named player of the match for her impressive hunt in the final quarter and her two deflections, two intercepts, and two rebounds for the match.

The tense finish had Vixens coach Simone McKinnis up and about and emotional, proud of her side’s return to the grand final after finishing eighth in 2021.

“I’m just over the moon, obviously you could see after the game what it meant to the girls, it was a fantastic finish to that game.

“Yeah to be playing in a grand final, we’re just beside ourselves.”

Speaking to the Fox Netball broadcast, a devastated Jo Harten spoke well, as always, minutes after such a tight finish to her side’s 2022 season.

“It was an outstanding performance tonight, to come here in front of this crowd… to perform the way we did, I’m so proud of us.

“We have to live by the wins and the losses of the season, and it came down to one goal, but we gave it everything tonight.”

In big news on Thursday, it was announced that Kiera Austin would miss the preliminary final under health and safety protocols. Ruby Barkmeyer, who was in the squad during Rahni Samason’s injury stint on the sidelines, was added once again.

The first five minutes were riddled with nerves, there were three intercepts between the sides and several missed opportunities as well.

Samson was confident early and calling the shots as well, she scored three of the Vixens’ first four goals and in comparison at the other end, Harten and Sophie Dwyer were a little tentative.

At a time out, Julie Fitzgerald gave clear instruction to her players, looking for them to lift early in this contest as the margin had already stretched out.

Dwyer was having trouble with her shot, while Harten lacked confidence in her match-up with Emily Mannix, who was all over the passes into the circle.

Harten sunk a super shot, but there continued to be issues with the Giants’ centre pass play, and it was Kate Eddy who popped up for an intercept.

Mwai Kumwenda was given a penalty shot to end the quarter, she let Samason sink it and the margin became eight at the end of the first.

Harten at quarter time gave the pep talk, and her fellow goaler took the opening intercept of the second quarter, putting on the defensive pressure that Fitzgerald had asked for.

Samason’s first miss was gobbled up by the Giants and while it was still a little shaky on transition, they found Dwyer who put up another and forced Simone McKinnis to bring the team in for a time out.

Another miss to Samason had Kumwenda waving her arms asking why the pass wasn’t made. Luckily for the Vixens, Kate Moloney was all over a pass into the centre third and they converted.

After starting quietly, just as she had last week, Dwyer really came alive in the second quarter and her attempts increased.

A positional swap happened for the Vixens, with Kumwenda doing the running around out of the circle and Samason sitting at home a little more.

Six super shots in the second quarter to the Giants, and an increase in overall court pressure, put the Vixens on the back foot. A 10 point turnaround in the second, saw the Giants take the lead by two at the main break.

After grinding out the Vixens’ fiery start, the Giants attack came to the party and were able to reward the efforts of their defensive trio in Tilly McDonnell, April Brandley and Amy Parmenter.

The Vixens defensively lifted again, isolating players in their box defence, and Eddy took another intercept to even the ledger.

Giants’ penalties started adding up, but with majority contact calls, rather than obstruction, the players were on the body and going for the ball every time, and it wasn’t affecting the scoreline.

A huge deflection and follow-up for the intercept from Parmenter fired up the crowd, and that only fired up Harten further.

Weston’s defensive play was catching the eye of the umpire, as was Eddy’s, who after three in a row was given a caution for deliberate contact.

Parmenter continued her hunting ways and picked up yet another intercepts, creating a six point margin.

At a technical time out, the Vixens were instructed to return to one-on-one defence, with the box taking them out of play too often.

A held ball turnover brought it back to five for the Vixens, but immediately Parmenter’s hands got in between again. Unfortunately, Harten’s two attempts at the super shot ran out of the ring and the Vixens had the ball again.

A coach killer, Liz Watson breaking, was a double blow with Harten sinking yet another super shot. In front, the Giants were still looking for twos and taking every opportunity to extend their lead.

At three quarter time it was a nine point margin in favour of the Giants.

Barkmeyer came onto the court at goal attack, replacing Samason; an enormous amount of trust placed in the hands of a player who has not played a minute of Super Netball in 2022 until this point.

Weston immediately got hands on the ball, sitting in the middle lane, as she’d been instructed to by McKinnis. It went unrewarded, though, because Mannix was picked up for footwork.

Speaking post-match, McKinnis commented on how her defenders had to work hard to combat the potent, double-super-shot-shooting attack of the Giants.

“They had to be keeping in the contest, they had to be working to be in front in that circle, back themselves to make them have to throw it over and I think keep contesting that ball,” McKinnis said.

“And I think in that last quarter you saw them taking it on and going for the balls, Jo (Weston) and K-Eddy (Kate Eddy) and just having a go at the balls and that started to come our way.”

Dwyer’s accuracy dropped in the fourth, three misses in the opening five minutes had her looking tentative like she was in the opener. The result was a four goal run to the Vixens, to draw the deficit in to five.

Unsurprisingly, the Giants called a tactical time out; they knew this challenge was coming and needed a reset.

Samson returned to get a feel for it ahead of the Power Five period, and a held ball call brought it in to just two points.

The contest was levelled with a Samason super shot, and the Giants lost the ball again, the crowd certainly getting involved.

Vixens got ahead by two with 90 seconds left on the clock, but Dwyer drained the super shot to get it even again.

A Kumwenda brain-fade, passing off a shot for one, went straight to Parmenter and the Giants took it down the other end of the court.

It was Mannix who saved the day though, a stunning intercept gave the Vixens a second chance to get ahead and Kumwenda held her nerve on this occasion to put the Vixens ahead by one, with 10 seconds remaining.

The Giants ran it down the court and Dwyer through one up on the final whistle, but the umpire signalled ‘no goal’ and the Giants were left devastated.

A second 10 point turn around for the game swung the result in the favour of the Melbourne Vixens, who will take on the West Coast Fever in the grand final next Sunday.

STEPH WOOD: ‘I'M NOT SHY IN SAYING THAT I WANT A GOLD MEDAL’

It was the crowd that willed the Melbourne Vixens home today, and McKinnis was pleased they could give the vocal, supportive crowd a win to end their first season back at home in two years.

“Today was brilliant, being in front of the crowd today for this final.

While emotions were high as the finals run ended for the Giants this season, a reflective Harten spoke of her pride and privilege to captain the club, especially as they continue striving for that ultimate success.

“It’s one of my greatest privileges to captain this team, you’re just outstanding women, you’re role models, and you’re just amazing to play and train against week in, week out.

“And like I said this morning, the future is big and bright for this club, and we have got success in the not so distant future.”

The Melbourne Vixens will travel to Perth for the Suncorp Super Netball grand final against the West Coast Fever, next Sunday at 7:00pm AEST.