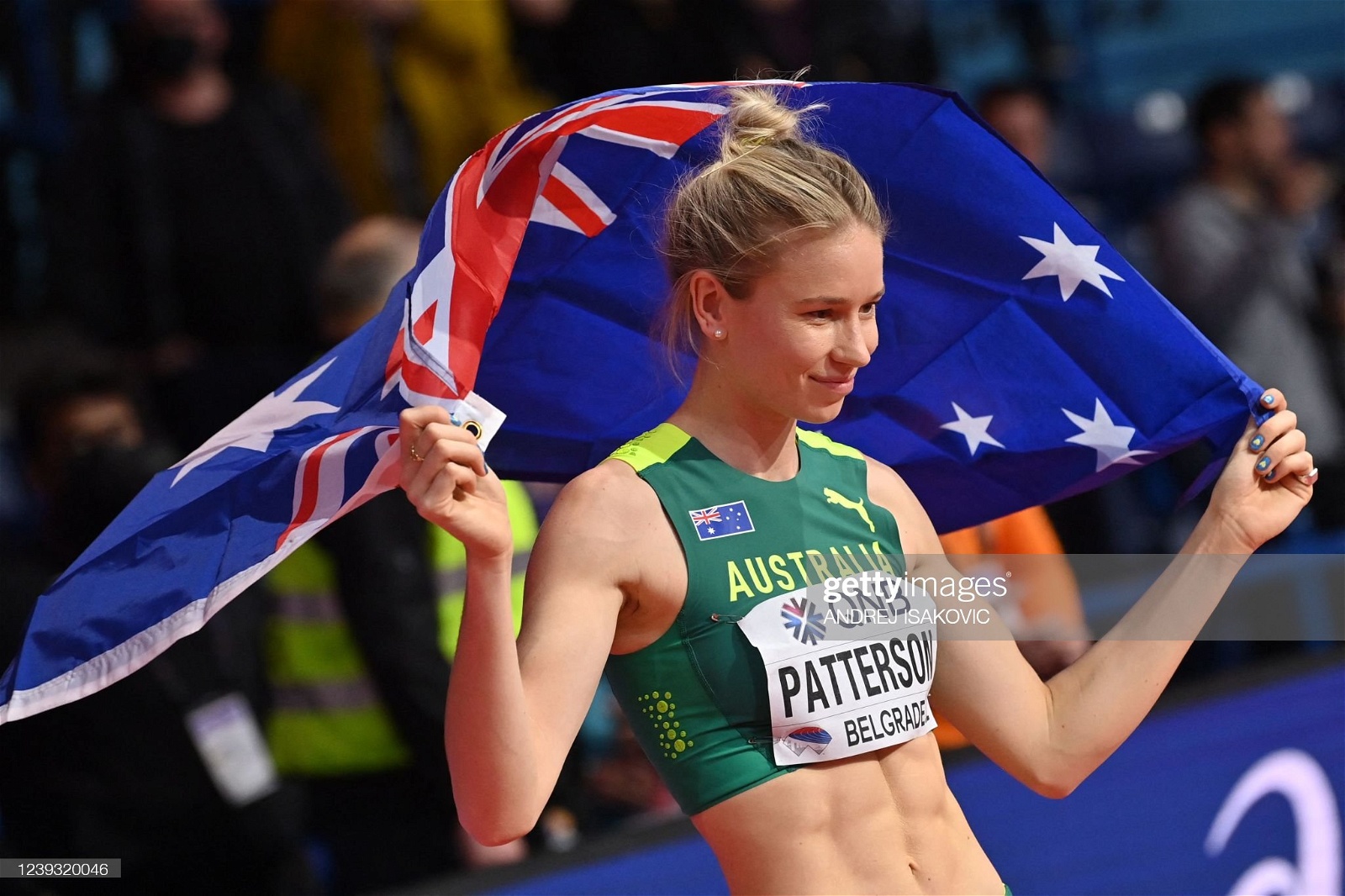 Just a week out from Australian Athletics Nationals, Eleanor Patterson and Ash Moloney have crushed indoor high jump and heptathlon National Records on their way to medal success.

Just a week out from Australian Athletics Nationals, Eleanor Patterson and Ash Moloney have crushed indoor high jump and heptathlon National Records on their way to medal success.

Just a week out from Australian Athletics Nationals, Eleanor Patterson and Ash Moloney have crushed indoor high jump and heptathlon National Records to make their way onto their respective podiums at the World Athletics Indoor Championships in Belgrade, Serbia.

It's been a fantastic start to 2022 for Eleanor Patterson breaking the Australian, Oceania and Commonwealth Records for the second time this year, achieving a new overall personal best.

But that's not the only way Patterson wrote her way into the history books, becoming the first Australian to medal in the high jump at indoor Worlds and the second NSW athlete to win a medal in 20 years.

The 25-year-old sat in the bronze medal position after needing a second attempt at 1.98m, but the gold medal looked possible after she broke the 2.00m milestone for the first time in her career, a one centimetre improvement on the record she set in February.

Missing 2.02m Patterson set the bar to 2.04m with the hope that she could overtake Ukraine's Yaroslava Mahuchikh with a successful jump.

Unfortunately, the Aussie couldn't clear the bar, which was set to five centimetres higher than any of her previous bests prior to competition and had to settle for silver after three attempts.

Patterson only had positive words for her result, praising her coach Alex Stewart for the work they've done together since her return to the sport in 2019.

“I’m still trying to process it all. I knew I was coming in in good form and I knew I could jump big, but I’m incredibly proud of myself and my coach [Alex Stewart] and we can never knock that. I’m really excited for what the future holds,” Patterson said.

“It’s been an up and down journey and one that hasn’t been so linear. That’s part of the reason why I’m so proud of myself. When I returned to the sport in 2019 and started to work with my coach, we started from scratch in a lot of ways.

“Obviously from a very young age, there has been hype in jumping two metres and to finally do that is a very special feeling. I’m incredibly proud to do that with Alex by my side. I love this sport and I love being able to get these opportunities to be here.”

The 25-year-old also had a few words of praise for her rival Mahuchikh and the Ukrainian women competing in Belgrade despite the adversity they've faced over the past month.

“Ukraine as a country has a very rich pool of talent of high jumpers. The hardships they’ve gone through, no one deserves to go through and the journey which they’ve had to go through just to get here is incredible. I was somewhere safe and didn’t have those threats, so to see them here, it was an emotional thing to process,” Patterson said.

“You’re out there competing and everyone tries to keep control of their emotions, but you can’t help but have respect for those girls. I painted my nails blue and yellow… sometimes there is a language barrier so I did it for support. I am incredibly proud of Yaroslava and what she’s been able to do with what she’s going through. It was special to witness.”

Ash Moloney was just nine points short of silver in the men's heptathlon, claiming his second consecutive bronze medal on the international stage, breaking the Australian National record in the process, receiving 6,344 points.

He finished behind Canada's Damian Warner, who won with 7,489 points and Switzerland's Simon Ehammer with 6,363.

The competition started with the 60m sprint where the 22-year-old Australian clocked in at an impressive 6.70 seconds, second only to Warner.

In the second event Moloney earned a whopping 1015 points, recording a lifetime best of 7.82m. The jump was 10cm better than his previous best record from the Australian Track and Field Championships, an outdoor event, in April of last year.

Things started to look dicey for the Australian in the third and fourth rounds of competition, placing ninth in the shot put with a 13.89m and struggled in the high jump having to retire after clearing 2.02m due to his pre-existing knee condition flaring up.

He started day two in third place but there wasn't much room between Moloney and those in fourth and fifth place.

The second day of competition started with the 60m hurdles and Moloney was lightening quick finishing in 7.78 seconds.

He backed up the performance with another personal best, this time in the pole vault, clearing 5.10m.

It all came down to the final event, the 1000m, timing was everything for Moloney and if he could finish with a quick enough time he would either equal or better his Olympic bronze. It wasn't quite fast enough to earn a silver medal finishing with a time of 2:43.01 but it was good enough to lock in bronze.

Moloney had his doubts about whether he could earn a medal but loved competing in front of a crowd for the first time in a long time.

“It’s absolutely unreal, I’ve been dreaming of competing in front of such a big crowd and now I finally had the chance to do that. I came to Belgrade not expecting too much, but I knew coming in if I kept my cool, I had a chance to win a medal,” Moloney said.

“Going into today in medal position, however, there was a lot of doubt that I could do this going into today, especially in the 1k. If the Estonian [Hans-Christian Hausenberg] overtook me in that race, I wouldn’t have finished in third. I knew I had to get in a good position in the first 50m if I didn’t want to chase anyone down.”

Australia still has a number of medal opportunities on day three, which kicks off at 8.05pm AEDT on Sunday evening.