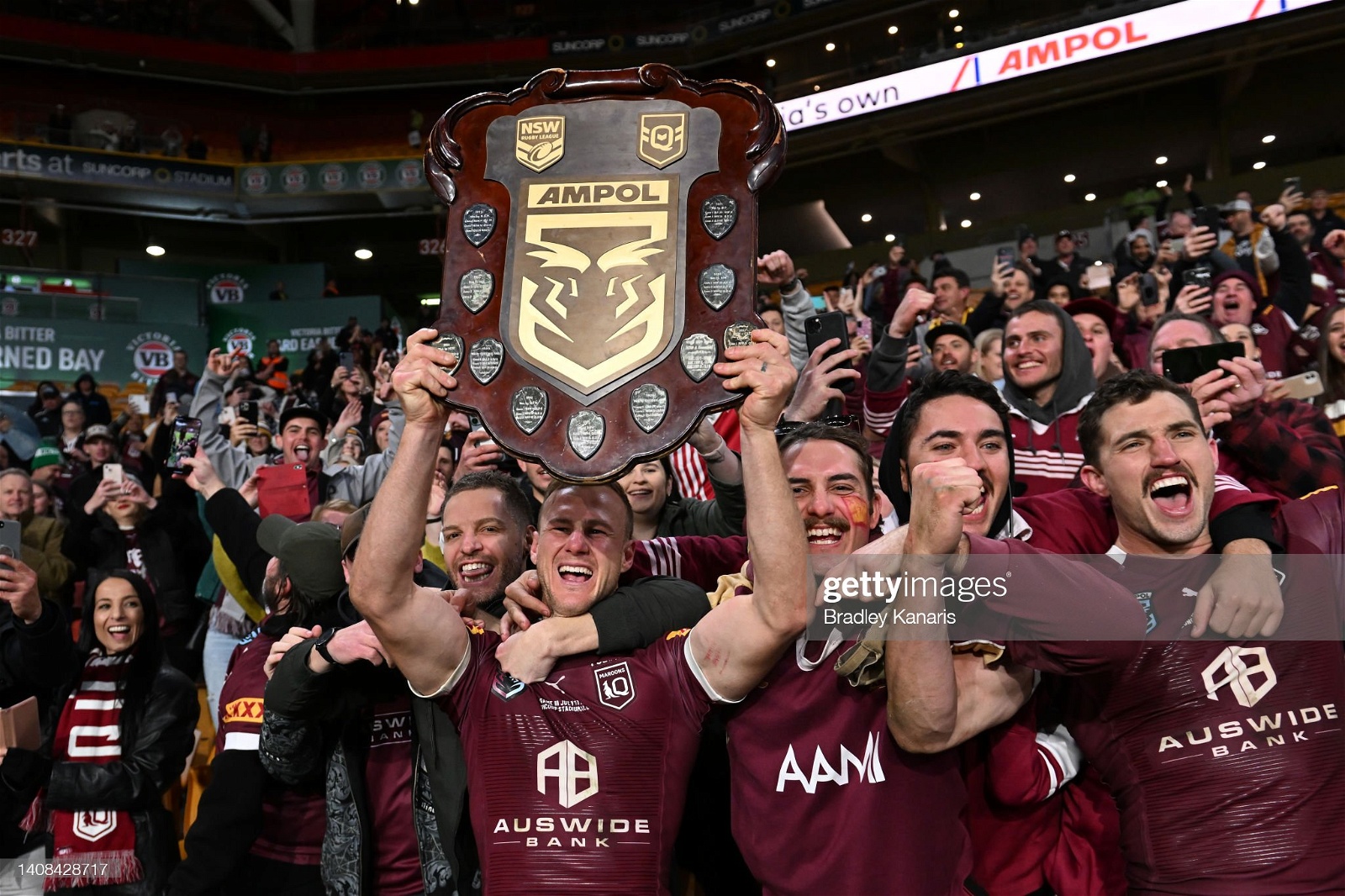 New South Wales and Queensland came together tonight for a fiery State of Origin decider, with Queensland coming out victorious, winning 22-12.

New South Wales and Queensland came together tonight for a fiery State of Origin decider, with Queensland coming out victorious, winning 22-12.

Both Origin teams had a chaotic week leading up to the decider tonight, with QLD’s Cameron Munster and Murray Taulagi testing positive for COVID and NSW’s Latrell Mitchell ruling himself out due to a prior injury.

Instead, we saw the game begin with a few Origin rookies for both teams, including Tom Dearden for QLD and Jacob Saifiti for NSW.

At Brisbane’s Suncorp Stadium, a crowd of over 69,000 people were cheering for the Maroons and Blues in what was expected to be an incredible Origin decider.

It was an unbelievably fiery and messy start to the decider, with 3 star players sustaining head injuries within the first 3 minutes. We saw NSW favourite, Cameron Murray, out just 1 minute and 6 seconds in, with a HIA. Just 50 seconds later, QLD’s Selwyn Cobbo was given a neck brace and driven off the field.

A minute and a half later, we saw Lindsay Collins, another QLD player, off with a HIA. All players were ruled out of playing the rest of the game.

Eight minutes in, we nearly saw a QLD try, but after deliberation from the VAR, it was found to be a knock-on, so no try was awarded.

This Origin decider was very intense, with dangerous tackles and fights occurring throughout the night. QLD player Fa’asuamaleaui was reported for a dangerous tackle against Matt Burton when he smacked him across the face 8 minutes in.

Origin host James Bracey commented on the dangerous tackle from Fa’asuamaleaui, “I could feel that hit from the box.”

Queensland captain Daly Cherry-Evans played a great game, and at 11 minutes, we saw an incredible intercept from him, which was defended by NSW captain James Tedesco. QLD’s attack here was excellent, with 5-6 players pushing Tedesco forwards, almost reaching the try line.

Twelve minutes in, we saw the night’s first try by QLD favourite Valentine Holmes, with an incredible assist by rookie Tom Dearden. This was Holmes’ 11th try in 13 Origin appearances, demonstrating how consistent and worthy he is as an Origin player. Holmes followed through with the conversion, giving QLD the night’s first points.

Rookie Tom Dearden was a strong player tonight, despite a few errors. Shortly after Holmes’ try, Dearden fumbled the ball but followed through with a strong recovery.

Fifteen minutes in, NSW got a set restart, but their attacks weren’t strong enough to break through QLD’s defence.

QLD star Kayln Ponga had a strong line break at 17 minutes, but his team failed to follow through, with messy passes and struggling teamwork.

We saw NSW fight back, with fan favourite Jerome Luai scoring the Blues’ first try of the night at 18 minutes. Despite being a messy struggle, Luai put up an intense fight and got the ball over the try line. Nathan Cleary cleared the conversion, bringing the score to 6-6.

James Tedesco had a strong line break and run 20 minutes in; however, QLD’s defence held him back.

At 22 minutes, we nearly saw another NSW try, but the VAR found that Apisai Koroisau was offside, which impacted the play and resulted in a NSW knock-on, so they were not rewarded the try.

Throughout the game, players from both teams fumbled, slipped up and struggled. We saw this in the 24th minute, where Ponga had a big slip after catching NSW’s kick bomb.

Again, we nearly saw a QLD try in the 26th minute, but rookie Tom Dearden, along with Jeremiah Nanai, made an error, so QLD was penalised.

Thirty-one minutes in, NSW rookie Jacob Saifiti scored his first Origin try, with Cleary following through with the conversion. NSW was up 12-6 and feeling good.

Thirty-seven minutes in, NSW player Matt Burton did a classic Burton kick bomb, with incredible height but not much distance. Commentators joked about his kick bombs, saying, “He always seems to hit the spider cams…We better make them higher!”

Towards the end of the first half, we saw 2 set restarts for QLD, which ended in a try by Kurt Capewell, bringing QLD back to the fight. Valentine Holmes missed the conversion, with the halftime score ending as 12-10 to NSW.

Paul Gallen described the game as incredibly dangerous, saying, “It’s do or die out there…Emotions are high.”

“There have been no techniques involved, no self-preservation on either end… Let’s hope there are no more injuries”, he said.

The second half began with a massive fight between the Maroons and Blues, specifically Dane Gagai and Matt Burton. Throwing punches at one another, both were sin-binned for 10 minutes. QLD captain Cherry-Evans argued with the referee on field, who argued back,

“What has just happened is completely unacceptable”, he said.

The game continued with a few Cleary kick bombs, errors from both teams and a dangerous tackle from Cherry-Evans on Cleary, resulting in a penalty.

Fifty-one minutes in, Gagai and Burton returned to the field, and shortly after, NSW favourite Damien Cook joined the Blues.

A knock-on from QLD player Jeremiah Nanai ruined chances for another try, but shortly after, Ben Hunt had an incredible 40/20 kick, giving QLD a huge advantage. Despite this, the NSW defence was strong, pushing against the Maroons and not allowing them to score.

Sixty minutes in, Ponga had an incredible line break and try, running up the field and escaping the Blues chasing after him. Holmes followed through with the conversion, bringing the score to 16-12 to QLD.

A huge moment happened 67 minutes in, as Harry Grant got over the try line. However, an earlier tackle in that set resulted in no try for Grant, with the VAR finding that the ball had not touched the ground during the tackle.

Holmes had an incredible play in the 69th minute, as he saved the ball from going out, giving QLD a chance to finish their set. Commentators described it as extraordinary, saying,

“That was one of the most remarkable plays of the game.”

The last 10 minutes saw several kick bombs from Luai, Cherry-Evans and Cleary. The final big play of the night came from QLD player Ben Hunt, with a significant intercept and run down the field to score the last try of the night, solidifying QLD’s win. Holmes cleared the conversion, bringing the score to 22-12.

With 80 minutes of incredibly entertaining plays, the 2022 State of Origin decider was one of the best games of footy seen in a while. QLD came out victorious, winning the series 2-1.