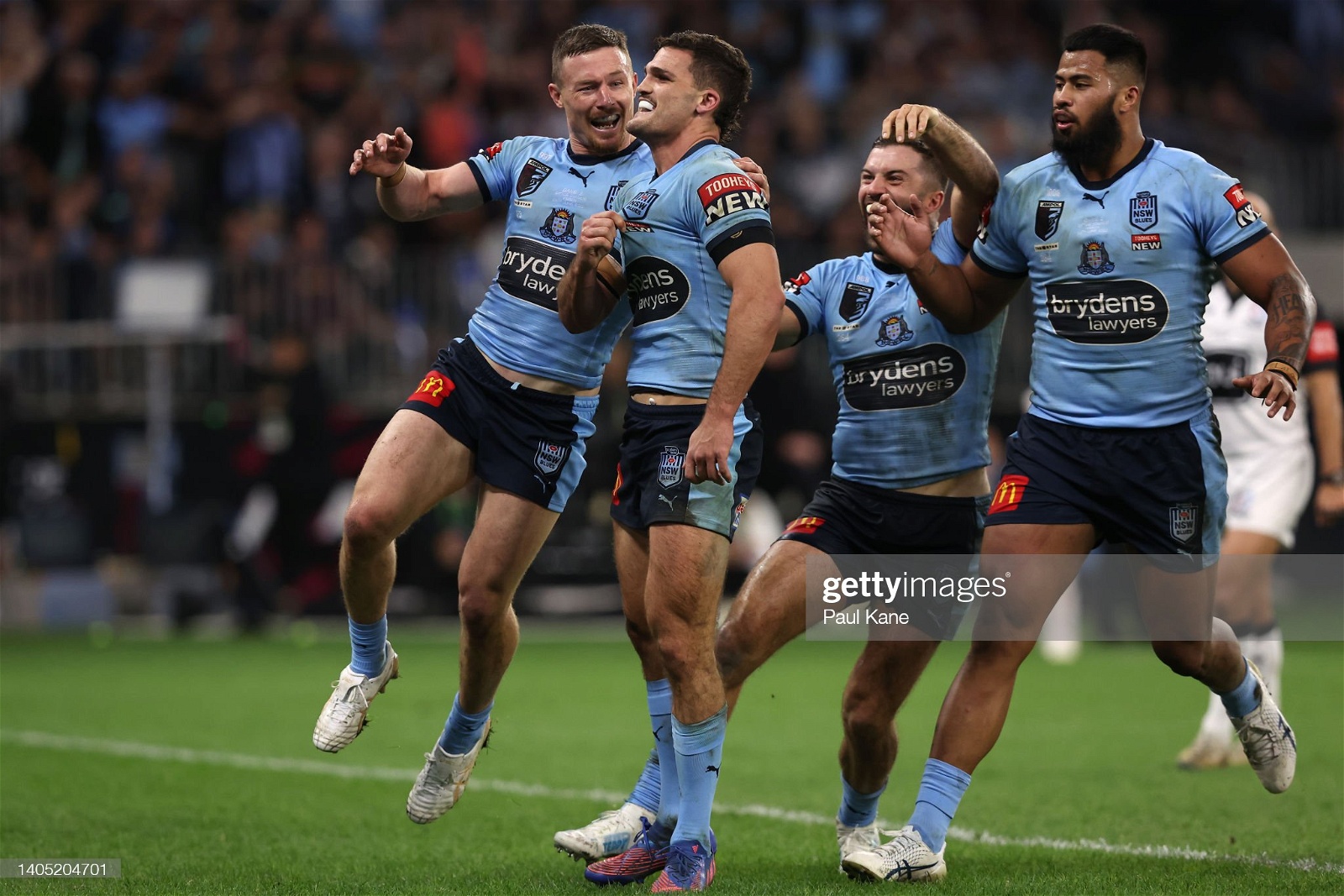 New South Wales hit back with a 44-12 win against Queensland in Perth, sending the 2022 State of Origin series to a decider in Brisbane.

New South Wales hit back with a 44-12 win against Queensland in Perth, sending the 2022 State of Origin series to a decider in Brisbane.

New South Wales hit back with a 44-12 win against Queensland in Perth, sending the 2022 State of Origin series to a decider in Brisbane on July 13. The Blues’ mass changes from their Game One squad, including seven new faces, paid off in front of a sold-out Optus Stadium.

Nathan Cleary bounced back with an outstanding Man of the Match performance, racking up the second-most points in a single game in New South Wales State of Origin history with 24 points, behind Ryan Girdler’s 2000 record of 32 points.

NSW won the first Captain’s Challenge of the game after the Bunker ruled that Felise Kaufusi stripped the ball from Liam Martin. A second stripped ball in quick succession led to Nathan Cleary having a shot at a penalty goal, securing the first two points of the match for NSW.

Queensland got the first try of the match, with a short ball from Kalyn Ponga putting Felise Kaufusi through a gap. The try was converted by Valentine Holmes, leading to a 6-2 score-line in favour of the Maroons.

Kalyn Ponga beat the Blues on the edge with his speed and passed to Valentine Holmes, who then sent Cameron Munster in to score.

Queensland’s Felise Kaufusi was sin-binned late in the first half, and the Blues immediately capitalised, with numbers on the edge paving the way for a Brian To’o try on the wing. This was thanks to quick hands from Nathan Cleary and Jarome Luai and a catch and pass from Matt Burton on the inexperienced Queensland right edge.

With Nathan Cleary and Valentine Holmes converting every try successfully, the State of Origin sides went into the sheds at halftime with a close score-line of 14-12 to New South Wales.

While both coaches were optimistic at halftime, seeing the scoreboard as an opportunity and the game to be evenly balanced, it wasn’t meant to be for the Maroons.

New South Wales started to pile on the points in the second with a Queenslander still in the bin from the first half. The first points of the second half came from a long pass from Nathan Cleary to Daniel Tupou on the wing. Jarome Luai then skipped past the defence to score.

Nathan Cleary continued to silence his Game One critics with two back-to-back tries. He used impressive footwork to take advantage of the slippery conditions and score his first Origin try. Cleary got a double straight away, selling a dummy to Ben Hunt to go in for a try between the posts. This blew the Blues out to a 26-point lead at 38-12, thanks to a perfect goal-kicking record from Cleary.

Stephen Crichton passed to Angus Crichton, who scored the last try of the match untouched between the posts. Nathan Cleary converted to stretch the score-line to 44-12 in favour of New South Wales.

In addition to Man of the Match Nathan Cleary, Jake Trbojevic, James Tedesco and Matt Burton all performed well. Matt Burton’s dream debut will cause a selection headache for the Blues moving forwards as they are spoiled for choice in the Centres, with Jack Wighton, Tom Trbojevic and Latrell Mitchell in the mix.

The game saw a long list of Head Injury Assessments, with the Blues’ Cameron Murray and the Maroons’ Lindsay Collins, Jai Arrow and Kalyn Ponga coming from the field. Each player was able to return to the field except for Ponga, who went off with only 10 minutes left in the match. Two New South Wales players were placed on report, including Nathan Cleary for his tackle on Kalyn Ponga, which led to Ponga’s HIA, as well as Damien Cook for dangerous contact on Queensland's Harry Grant.

New South Wales State of Origin Coach Brad Fittler said he was pleased with the changes he made to his squad for Game 2, having lost to Queensland 16-10 in Sydney in the Origin opener.

“They played like they trained. They trained really hard all week. I think the changes made a difference. We had some real defence-minded people in there that worked hard for us,” he said.

Queensland State of Origin Coach Billy Slater said the Maroons would learn from the game to come back stronger in the Origin decider in Brisbane.

“There’s some good stuff that we’ll take out of tonight. I thought the boys were quite brave and courageous for the first 50 minutes and things snowballed against us. We contributed to it,” he said.

“It’s one all now, and we’re back on the starting line.”