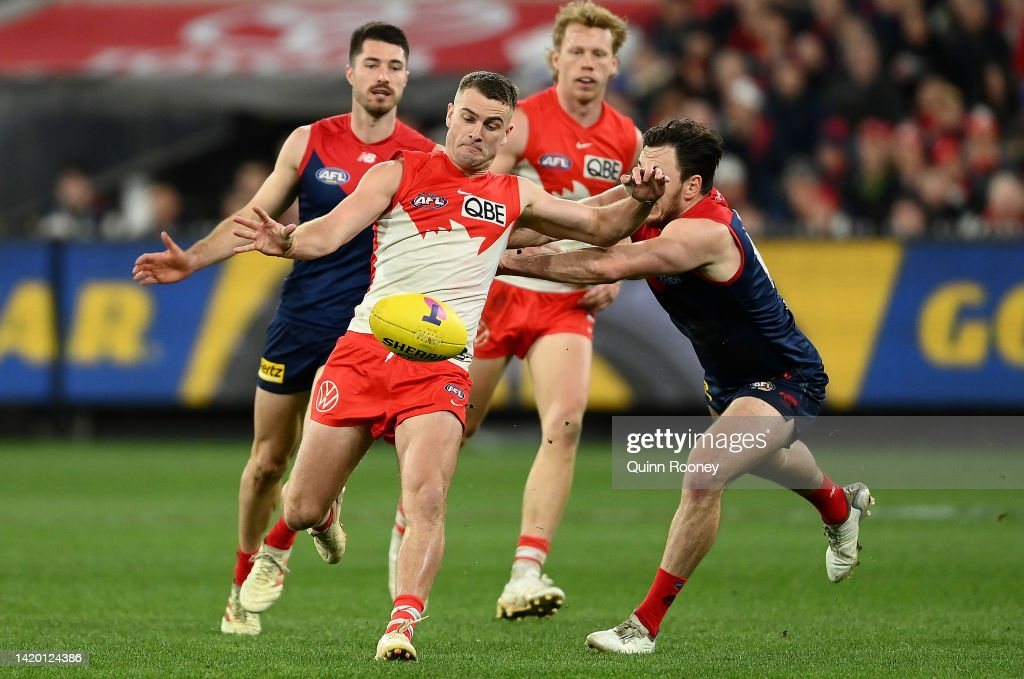 AFL Finals Week 1: The moments that will live on

After what was possibly the greatest week of finals this century, there will be plenty of moments that live on in infamy for years. Here are ten of the moments that mattered over the weekend.

AFL Finals Week 1: The moments that will live on

After what was possibly the greatest week of finals this century, there will be plenty of moments that live on in infamy for years. Here are ten of the moments that mattered over the weekend.

It was a classic week of finals with some of the best games seen in years. The qualifying finals were both classics, while the elimination finals came down to the wire.

Here are ten of the moments that will stick in football memory after a cracking weekend of games.

It's the ARC review that had everyone talking after Thursday night's elimination final. Did Tom Lynch's kick go over the top of the post, or inside the goal? His reaction suggested he wasn't confident, and in the end, the score review agreed.

It was hardly definitive, but the decision to overturn the goal umpire's original indication was critical, with the Tigers eventually going down by two points, their season ending on that note.

Lynch had been impactful throughout the night, but when push came to shove, he didn't exactly celebrate the goal like he had won the match for the Tigers. The right result may have been achieved, but it's hard to have confidence in the process to that result.

Fox pounces with a smother

Robbie Fox personified the Swans' pressure and defensive intent in one passage, in the fourth quarter of the qualifying final. With the Swans trying to protect their lead, the Demons surged forward inside 50.

Charlie Spargo had the ball, by himself, with Jake Melksham streaming towards goal. Fox, with multiple efforts in the same passage, affected Spargo's handball, bumped Melksham before he could snap, and smothered Spargo's kick in the space of a handful of seconds.

The Swans would clear the ball off the goal line and prevent the Demons scoring, but it was the effort of Fox that was one of the standout moments from the match.

Nothing Amiss late in the game

A cut-throat elimination final in your second game is a hard place to settle into life in the AFL. And early on, it looked like Fremantle young gun Jye Amiss was struggling.

Late in the first half, he marked on the lead and missed his shot on goal, but the mark was enough to kickstart his momentum. In the second half, Amiss would kick two goals, and provide a leading target as the Dockers roared back into the contest.

His forward pressure and tackling was part of a lethal forward setup for the Dockers, as they ran over the top of the Bulldogs to close out the win in front of a record crowd at home.

Fire and Ash for Pies

Ash Johnson is a young player, still in his first season at the top flight. Despite that, he stood toe to toe with Jeremy Cameron down the other end, with Johnson kicking two goals in the qualifying final to try and keep Geelong at bay, even as Cameron started to gain the ascendancy.

His ability to step up calmly with a set shot on the boundary line, thread the ball through the posts and bring the crowd back into the game was a huge moment for Collingwood, even if it wasn't quite enough to get them over the line.

His continued growth will be key for Collingwood over the rest of the finals, as he grows in stature as a spearhead every week.

Joe Daniher has kicked 276 goals in his career, but few have been as significant as the most recent, a soccer from the goalsquare to give the Lions the win over the Tigers.

Late in the game, Zac Bailey bombed the ball to the Lions' goalsquare, where Daniher stood under the ball, outnumbered by Tigers' defenders all around him. When no mark was taken, and the ball spilled loose, Daniher reached out his long leg and snuck the ball over the line.

It was a moment that broke the hearts of the Tigers, and kept the Lions' season alive for another week, with a thrilling victory.

May-be not the best idea

Steven May was one of the best players on the ground on Friday night for the Demons. He comprehensively dominated Lance Franklin in the air and on the ground throughout the match, but 'Buddy' still got under his skin enough to make the difference.

With the Swans struggling in the second term, May threw an elbow into the back of his direct opponent, drawing a free kick, and giving Franklin his first touch of the night. Moments later, May knocked Buddy off his feet as he was running back to goal.

The moment gave the Swans a 50m penalty, a Will Hayward goal, and some momentum in the match, and from that point on, the Swans were on fire. It was a killer moment that made all the difference for the Demons on the night.

Robbie Fox had one of the all-time finals defensive moments with his effort, but it wasn't the only standout defensive moment of the weekend. In the fourth quarter, with the game on the line, Michael Frederick chased down Ed Richards to stop the Bulldogs rebounding from the defensive end.

Frederick dislodged the ball in the tackle, and Michael Walters picked the ball up and goaled, giving the Dockers' momentum an even bigger push.

It was a moment of team success for the Dockers, with the whole team working defensively to stymie Richards' options and give Frederick time, and then the Dockers were able to capitalise.

Clarry can do anything

Clayton Oliver has long been considered one of the stars of the game, with his ability to find time and space in the heat of the contest. When the Demons needed it most on Friday night, early in the third term, he unleashed a withering attack on the ball that kickstarted his team.

Oliver found space to kick two goals in as many minutes, working off the contest inside forward 50. The Demons needed a circuit breaker, and a way to score against the Swans' suffocating defence, and the midfielder took matters into his own hands.

He breathed life into the Demons with his second, as the reigning premiers fought to stay in the contest against the young Swans.

Gary Rohan's recollections of finals would not make for the most pleasant reading, after a number of games where his personal performance has not been at the level he would have hoped for.

Moments later, the ball sailed in to him, inside 50 and unmarked. Rohan dropped the mark, but recovered quickly to handpass to Max Holmes, who kicked the winner for the Cats as they booked a spot in the preliminary final.

Andy Brayshaw has become one of the game's elite midfielders, and this growth was on show on Saturday night. After a quiet first quarter, Brayshaw willed his team into the contest, and alongside Caleb Serong, was unstoppable as they did so.

Brayshaw and Serong finished with 32 and 33 disposals respectively, and combined for 10 inside 50s, 10 clearances, seven score involvements and six intercepts. The young duo were everywhere as the Dockers fought tooth and nail to overcome a 41-point deficit, and finished as the two most impactful players on the ground.