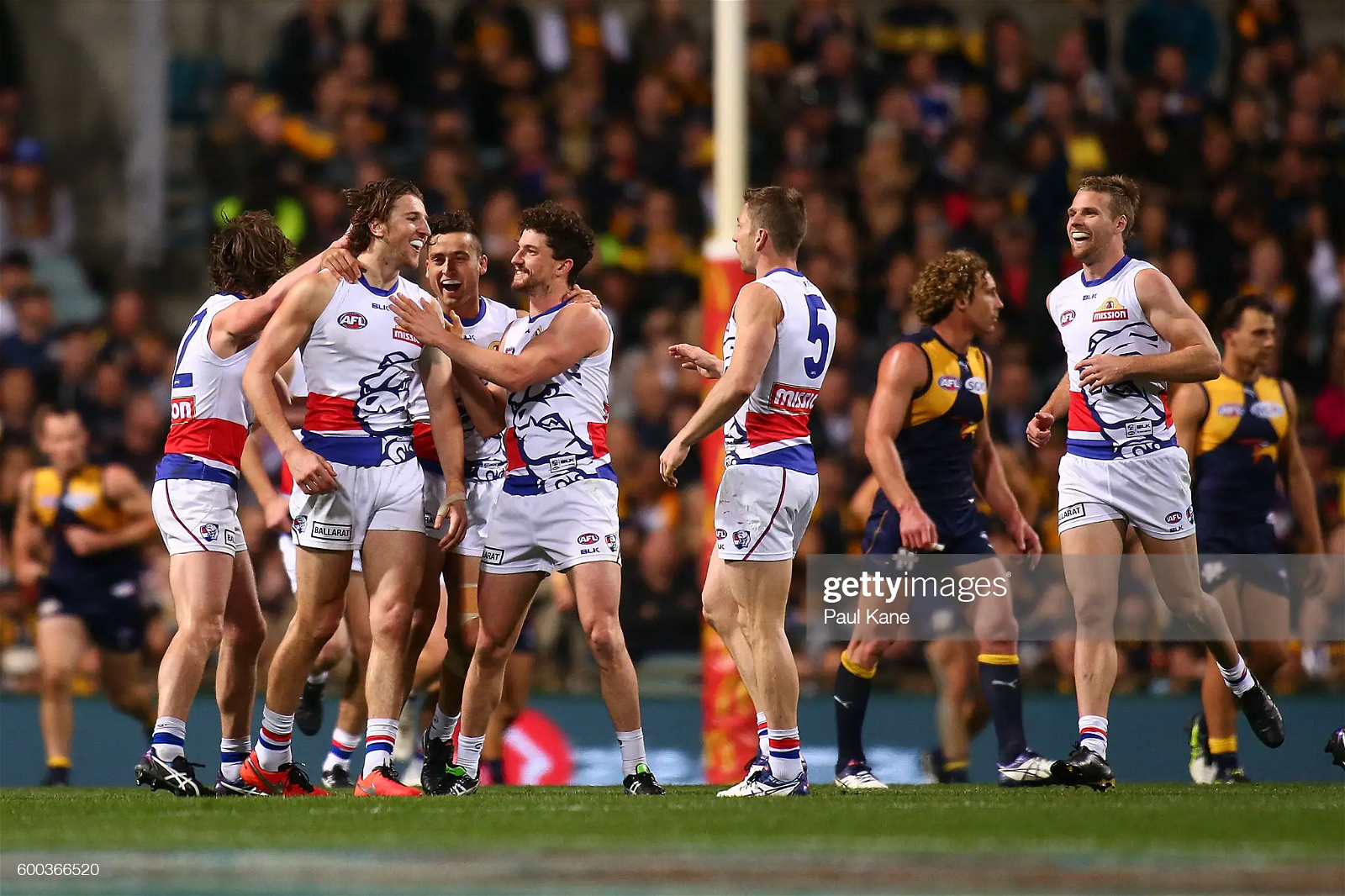 The top five Elimination Finals of the 21st century

With the 2022 AFL finals now right upon us, it's time to take a step back and look at the five best Elimination Finals of this century.

The top five Elimination Finals of the 21st century

With the 2022 AFL finals now right upon us, it's time to take a step back and look at the five best Elimination Finals of this century.

Some of the best parts of AFL finals time is looking back at some of the biggest and best moments of finals past. The Elimination Finals are some of the most exciting footy of the year, with both teams going as hard as they can to hold on for one week longer. The following are just five of the best from this century.

The Hawks came into this game with the advantage having finished fifth on the ladder overall with 13 wins and nine losses compared to the 12 and 10 record of the Crows. The Crows, though were coming in with late form, having won their last three matches of the season, while the Hawks were smashed by 72 points against the Swans in their final regular season match.

Lance Franklin was once again the difference for the Hawks kicking seven majors on the day, as well as a last-minute goal that sealed the deal and put the Hawks through to the second week of finals. The last-minute goal was part of a six-goal-in-ten-minute thumping that saw the Hawks back into the game after the Crows lead at every break.

The young Hawks midfield, which included Jordan Lewis, Luke Hodge and Sam Mitchell were too good for the older Crows midfield, which had to say goodbye to long-time Crows legend Mark Ricciuto after the siren.

The match was the start of almost a decade of domination from the Hawks, including the start of fans seeing Franklin being able to stand up and deliver in the big moments. While the Crows went home, the Hawks went on to the second week of finals but ended up losing to the Kangaroos by 33 points.

Adelaide once again features on the list; not to worry for the Crows fans, though, as it's a win this time. With both teams going on to compete for Grand Finals in the years following this match, it really was a match setting up the sides for the future as well as being one of the most entertaining matches of the year.

The Dogs came into this match having won 14 matches throughout the season, with eight losses, and finishing sixth. The Crows finished the year half a game behind their opponents on the ladder, after the points were shared with the Cats in Round 14 after the unfortunate death of coach Phil Walsh during the season.

It was amazing to see the tributes to Walsh throughout the year, and the Crows continued that tribute through their impressive on-field success through the back half of the year. With both teams coming in having lost their final match of the season, it was a match up for grabs.

With just half a quarter to go in the match, the Dogs managed to wrestle back the lead thanks to Tory Dickson's fifth goal for the game. But the Crows got over the line thanks to Walker and Cameron's heroics.

While Dogs fans will still argue that if they played at Docklands, they would have got the win, the AFL was justified in their decision to play at the MCG, with almost 61,000 fans seeing the match. The Crows then went on to be demolished by 74 points against the Hawks in the second week.

Oh, how the mighty have fallen. Both of these sides seem a long way away from finals now, but eight years ago, they were highly competitive out on the MCG. While both teams have fallen away in recent years, this was one of the best comebacks wins we have seen in a long time.

North Melbourne finished the regular season with 14 wins and eight losses, while the Bombers managed just 12 wins, nine losses and a draw - against Carlton in the season's final round. The Kangaroos came in with form, having won their last four games of the season, including three wins by more than 30 points.

It was just a year after the Bombers were banned from the finals for the supplements saga, and with them not having won a final since 2004, they were desperate. The Roos came to fight until the bitter end did.

The Roos were backing their fitness to run over the Bombers in the final quarter, and that plan worked perfectly. During the second half, the Bombers were leading by as much as five goals, but the Kangaroos, led by Drew Petrie - who kicked two final-quarter goals - got over the top.

Ben Brown kicked his fourth just as the final quarter started before Joe Daniher and Patrick Ryder extended their Bomber's lead. The Roos came back through consecutive goals to Ben Cunnington before Lindsay Thomas kicked the sealer with Petrie, then slotting the game's final goal.

It was the first Roos' first finals win since 2007, with them going on to beat Geelong in the second week of the finals before Sydney destroyed them by 71 points in the Preliminary fFinal.

The 2004 campaign from Melbourne saw one of the biggest fall-aways from an AFL side in a long time. They were on top of the ladder with four rounds to go, but with four losses in a row to finish the season, they finished outside the top four, in fifth. On the other hand, Essendon jumped into the finals over Fremantle in the final round, thanks to a win against the Western Bulldogs.

The Demons were in a tricky spot with the skipper David Neitz failing a late fitness test thanks to a calf tear he picked up in Round 21. On the other hand, the Bombers went in with a full-strength side, allowing them to go into the match as slight favourites.

With the lead changing 20 times during the match, it was one of the most exciting finals of the 21st century and, of course, the last one we have seen Essendon win. Essendon got off to a quick start kicking four straight goals to grab an early 24-point lead before Melbourne came back quickly to grab the lead by seven points early into the second quarter.

Matthew Lloyd then got onto a booming kick to get the lead for the Bombers before they went on to kick four more and take a 31-point lead into the halftime siren. The Demons managed to get back in the third term thanks to some excellent ruck work by Jeff White, taking an eight-point lead into the final terms.

Essendon, though brought its form of the previous round while Melbourne couldn't quite run out the game. Matthew Lloyd slotted his fourth major to secure the win for Essendon, who went on to lose the next week to Geelong by 10 points.

While it's not as close as some of the other finals, it is one of the most interesting. It's not often teams win a Grand Final from outside the top four, let alone seventh position, as the Bulldogs did in 2016. The Western Bulldogs travelled all around the country, including over to Subiaco, to destroy the sixth-placed West Coast by seven goals.

With only two wins separating first from seventh in 2016, the season was pretty even, at least up the top, but the Dogs somehow managed one of the best runs of all time to take home the premiership cup. They did come into this match, having lost to the Dockers in the final round, while the Eagles had won their last four in a row.

The Dogs were written off before the match, and it seemed to be the correct call early, with two turnovers gifting the Eagles the first two goals. From there, it was all Dogs who smashed through the Eagles, kicking the next seven goals to take a 31-point lead through the second quarter.

Joel Hamling is probably a name that many have forgotten since this match, but on the day he restricted Josh Kennedy to just two goals, giving the Dogs a massive advantage. The intense gameplay style from the Dogs overran the Eagles, who didn't come close in the second half leaving more than 40,000 Eagles supporters shellshocked.

The Dogs, of course, went on to win the 2016 premiership, while it took the Eagles a couple more years before they would take the cup themselves. After dispensing of the Eagles, the Dogs then went on to beat Hawthorn in Melbourne before travelling to Sydney, beating GWS in a thriller before a 22-point win in the Grand Final against Sydney.