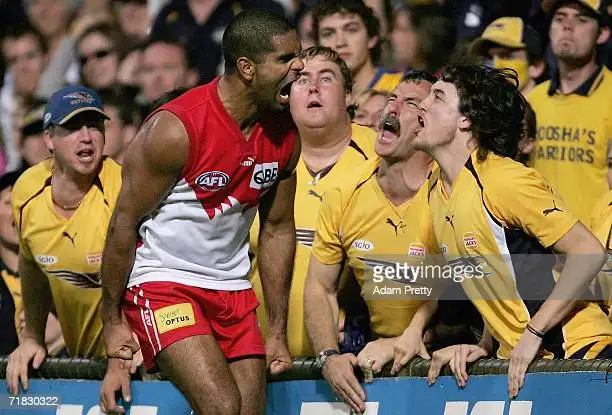 The Top Five Qualifying Finals of the 21st Century

With the 2022 AFL finals now right upon us, it's time to take a step back and look at the five best Qualifying Finals of this century.

The Top Five Qualifying Finals of the 21st Century

With the 2022 AFL finals now right upon us, it's time to take a step back and look at the five best Qualifying Finals of this century.

The Qualifying Final isn't as do-or-die as the Elimination Final, but that doesn't mean there haven't been some classics in these battles this century. The following list is just five of the best this century.

This was a battle between second and third, in the first year that the pre-finals bye was introduced. The football world waited with bated breath for two weeks for the next match between these two teams, amid the classic rivalry that was the 'Kennett Curse Era'.

The Cats kicked off the scoring when Jimmy Bartel found Steven Motlop all alone in the goalsquare, but Brad Hill quickly pegged one back. It quickly became an arm-wrestle of a match, with neither side able to really gain the ascendancy.

The Hawks led by just seven points at halftime and stretched the lead in the third quarter to 17 points on the back of a Ryan Schoenmakers goal in his 100th game.

Tom Hawkins started to bring the momentum back before Patrick Dangerfield started to exert his influence over the match, as the Cats led by two at the final break.

The arm wrestle continued as the two sides traded goals in the first half of the final quarter before it became a game of behinds. The last 12 scoring shots of the game were all behinds, including Isaac Smith's shot after the siren to almost win the match.

In the end, though, the Cats hung on for a miracle win as the Kennett Curse continued.

This was a match where Carlton held all the cards for most of the day. They looked fitter, stronger and faster than their opponents, and their only problem was capitalising on the dominance.

It was a moment in the spotlight for Cameron Bruce and Brad Green, both in their first seasons, as Green rattled off three goals either side of three-quarter time as Carlton started to collapse.

The Blues were up by 21 points at three-quarter time and had been in control all day, so nobody gave the Demons a chance except Green. Midway through the last quarter, after Green's flurry, Adem Yze was the one with the ball in his hands, and he goaled, giving the Demons their first lead of the day.

Suddenly, a lacklustre start was ratcheted up as Lance Whitnall kicked a goal with four minutes remaining, giving the Blues the lead once again.

In the end, Andrew Leoncelli stole the lead before Bruce put the margin beyond doubt, kicking a sealer with seconds remaining.

The Saints were the underdogs in this matchup, but somebody forgot to tell the men down at St Kilda. They started well before the heavens opened, and the game tightened up.

The Saints were in charge early, as Nick Riewoldt and Stephen Milne dominated their matchups. Brendan Goddard was also in fine form in the first half, collecting 20 disposals as he ran riot across half-back, tearing apart the Cats' setup.

At halftime, the game started to change, as Cameron Ling started on Goddard, and Gary Ablett started to break free from Clint Jones' tag. The margin quickly pushed out to 33 points midway through the third term.

Despite that lead, the Cats started to work their way back into the contest in the driving rain. Geelong dominated, piling on 17 inside the 50s and eight scoring shots, compared to the Saint's five entries and singular score.

However, the Cats were left to rue bad execution, as they kicked 1.7 in the final term, while the Saints kicked straight on their one shot. Cameron Ling thought he had stolen the win with a miraculous snap, but the goal was called back for a free kick against Cameron Mooney.

With 60 seconds on the clock, the Saints hung on and booked a spot in the preliminary final.

This was the first match between the teams that would go on to compete in the closest rivalry in football through the middle part of the decade.

The Swans and Eagles were two of the top sides of the year, and the star-studded Eagles midfield got their team off to a strong start. Despite that strong start, the Swans led for much of the match, including a critical third term.

After halftime, the Swans came out and held the Eagles goalless for the third quarter and took a 14-point lead into the final break, on the back of a strong performance from Tadhg Kennelly and Leo Barry.

All the action came to a head in the final term, with two controversial free-kicks giftings the Eagles goals, getting them back in the contest and on top. Barry was the hardest done by, with a very tough call against him resulting in shots on goal.

Dean Cox was the match winner for the Eagles, as he went behind the ball and took two clutch marks in defence in the dying moments of the match, a moment the Swans would turn around a few weeks later.

This game came amid the battle between the Swans and the Eagles, where six games in a row were decided by less than a goal. It also gave birth to one of the most iconic finals photos ever.

West Coast had finished on top of the ladder, fuelled by the bitter disappointment of a grand final the year before. Hosting the match, the Eagles struggled to get a fast start against the Swans.

Chris Judd was instrumental for the Eagles, with 34 disposals and two goals for the midfielder, who was right at the peak of his powers.

Barry Hall was the star for the Swans, with five goals, while Michael O'Loughlin had four goals, as the two stars dominated inside 50. O'Loughlin's fourth goal came from a chain of handballs inside the forward pocket that put the Swans ahead with five minutes to play.

On kicking the goal, emotion overtook 'Mickey O' as he roared at the crowd, showing how much the lead meant. The Swans would hold on to win by a point, keeping the Eagles scoreless in the final moments to make it three wins over the Eagles in a row for the Swans.