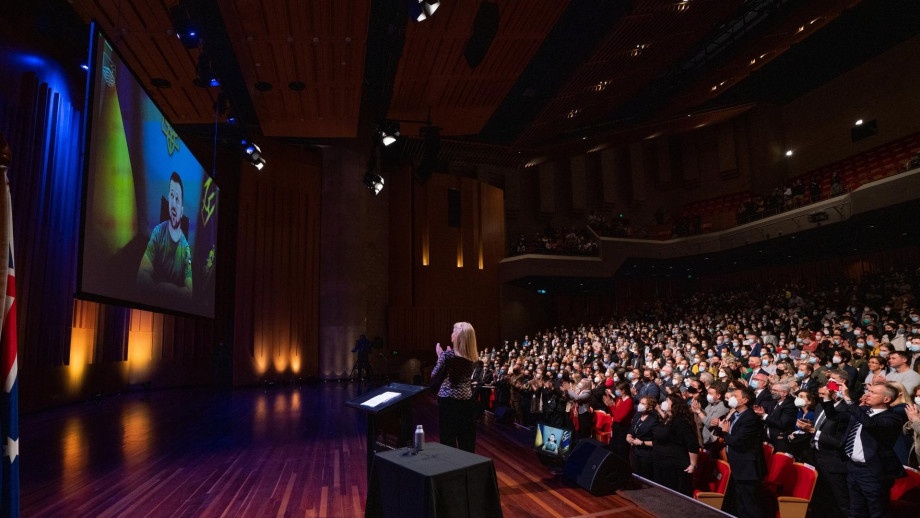 It’s been 162 days since Russia launched its full-scale aggression in Ukraine. This week Ukrainian President Volodymyr Zelenskyy gave a national address to universities across Australia.

It’s been 162 days since Russia launched its full-scale aggression in Ukraine. This week Ukrainian President Volodymyr Zelenskyy gave a national address to universities across Australia.

On the 3rd of August, Ukrainian President Volodymyr Zelenskyy addressed the Australian National University online in an exclusive event that was live streamed across the nation.

Zelenskyy began his address by powerfully naming the barrage of crimes the Russian Federation has taken since the beginning of its invasion of Ukraine.

“The difference between terrorists and Russia is that terrorists hold themselves accountable for their actions. Russia cannot even do that, and they try to accuse others of their atrocities,” President Zelenskyy said.

He rejected firmly the idea that Russia should be dealt with in an unprovocative way that would save its face.

“We cannot anger those who are already insane,” Zelenskyy said.

“I hope you continue to help us, continue to help Ukraine, including in the classrooms by standing for the truth and debunking the myth that was masterfully and so skilfully fabricated by the Russian propaganda machine,” he said.

“War is not over, and today, we as ever before need your support, need support of the civilised countries, along with whom we will most surely stop and conquer evil.”

After being met with applause, President Zelenskyy preceded to answer live-audience and online questions.

When asked about the admirable resistance and optimism of the Ukrainian nation, Zelenskyy expressed his pride.

“The resilience of our nation, depends not only on the leaders of the country, everyone in our country is a leader, that is the situation we have.”

President Zelenskyy was questioned on his hopes for the post-war democratisation of Russia. In response, he drew an analogy to Nazi Germany during World War Two.

“It was a fascist Germany, but the German nation found the power to recognise the tragedy as a great tragic mistake of their nation. I think that Russia will have this opportunity for sure.”

One audience member also asked how Australian students can assist in alleviating the human cost Ukraine is experiencing as a result of the war and whether their empathy and moral support are sufficient.

“I will be frank, we thank you for your moral support, but you also need to support us with deeds…we need support with concrete actions.”

Zelenskyy stated that combating Russian misinformation is an important act in supporting the Ukrainian struggle.

“Russia spends billions on their propaganda machine, instead of raising social standards, they spend it on informational weapons, and they fight with that.

“Students and youth, by using social media, have an opportunity to show the truth about Ukraine.”

So, what is going on in Ukraine currently?

Russia’s military campaign in Ukraine began on the 24th of February.

A grain deal with the United Nations and Turkey was struck between Russia and Ukraine which saw the first ship carrying Ukrainian grain from Odesa leave Turkey for Lebanon this week.

The deal has opened corridors in the Black Sea through which the safe passage of grain has been allowed. Another 16 vessels are believed to be loaded and waiting for permission to leave.

As one of the world’s largest grain importers, grain price increases and shortages have been felt all over the world, particularly in food insecure nations. The top Ukrainian grain importers include Egypt, Indonesia, and Bangladesh.

The allowance of Ukrainian grain exports is crucial to alleviating the country’s ballooning deficit.

German Chancellor Gerhard Schroeder expressed his optimism about what the agreement might mean for the future of the conflict.

“A first success is the grain deal, perhaps that can slowly be expanded to ceasefire.”

Also this week, President Zelenskyy appealed for direct talks with Chinese President Xi Jinping, calling for Beijing to use its sway on Russia to end the war.

In his address to Australian universities, Zelenskyy said he would like China to join “the unified world position.” He also believed that China would make the “prudent choice.”