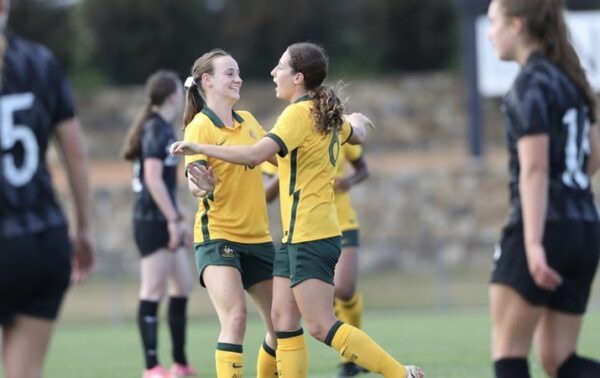 The Young Matildas first games since 2019 were an impressive display and cause for cautious optimism before the U20 World Cup.

The Young Matildas first games since 2019 were an impressive display and cause for cautious optimism before the U20 World Cup.

The Young Matildas performed consistently over two games against New Zealand despite very different results. A 5-1 win and a 1-1 draw gave Under 20 manager Leah Blayney plenty to be pleased about, but with room for improvement before August’s Youth World Cup in Costa Rica.

These two games were the first time the Young Matildas took to the field since 2019. Six players from that Asian Cup squad have established themselves as senior Matildas since. Although Kyra Cooney-Cross, Courtney Nevin and Mary Fowler remain eligible for the team, it is unlikely they will be called upon.

A fundamental purpose of the youth team setup is to prepare players for senior football. By this standard, Blayney’s tenure has been highly successful even in the absence of recent football.

The first game took place on Wednesday night at Deakin Stadium in Canberra. Both sides were made up of names familiar to A-League Women fans. Sarah Hunter and Emma Ilijoski started for the Aussies, while New Zealand were headlined by Wellington Phoenix star Kate Taylor in defence.

Wellington Phoenix were represented in both colours, Izzy Gomez was on the bench for the Young Matildas while Gemma Lewis kept Alyssa Whinham and Zoe Mcmeekan in reserve.

Lewis has worked double duty for the past year. She has guided Wellington through their first A-League Women season while continuing in her role in charge of New Zealand’s youth team. She drew heavily from her knowledge of this international squad to form the core of The Phoenix side. Many of the players selected to face Australia had been exposed to consistent 90-minute outing at senior club level over the past year.

In the case of Australia, only Sarah Gallagher of Western Sydney and Ilojoski for Canberra were first choice players at their club. Sarah Hunter has been integral to Sydney FC’s side but is part of an experienced midfield at the premier’s and many were excited to see what she could produce with more responsibility on her shoulders.

The 5-1 win in the opening matchwas no disservice to Australia. They attacked well and defended solidly. But New Zealand may feel unlucky at some of the chances they conceded.

A display of depth and quality

Jynaya Dos Santos opened the scoring almost immediately for the home side. Her effort crashed off the crossbar to beat Bri Edwards to set the tone for Australia.

Daniela Galic caused problems throughout the first half. Her dribbling and creativity resulted in a first half that saw her score once and earn a penalty. Sarah Hunter tucked away the spot kick with ease in an exciting midfield performance.

Charlotte Lancaster netted a brilliant long range goal for the Junior Football Ferns before half time. Khali Johnson and Gallagher completed the scoring for Australia after the break.

The second game on Sundaysaw a much more even contest. Whinham was more involved and Millie Clegg caused problems for Australia with her pace. Clegg’s run and finish levelled the scores after Sarah Hunter’s spectacular opener.

As the U20 World Cup approaches, there are reasons to be optimistic. Australia created chances from the wide areas an in midfield. Naomi Chinnama was composed at the back and Chloe Lincoln continued her remarkable rise with a series of good saves.

Hana Lowry’s appearance in the second match was impressive. Her ability to control the ball under pressure and make quick passing decisions will be an asset. Galic and Gallagher were both constantly dangerous from the wide areas.

Sarah Hunter might be the jewel in Blayney’s squad. In her first two seasons as an A-League Women’s player she has scored three goals across two clubs and won a premiership.

At Sydney FC, she is part of a midfield that dominates possession on most days. However she has shown an appetite for the hard work that defines many top midfielders.

Her composure to strike the penalty and her 25-yard rocket in the second leg underline the threat she poses. She is the type of player that can keep a side in a contest if it is not going their way.

Two of the youngest players in the squad, Alanna Murphy and Cailtin Karic showed glimpses of their well-documented quality. Ilijoski and Jamilla Rankin underline the depth Australia have in defence.

Absentees are cause for more optimism

Another encouraging sign is the quality of play despite the absences of some big names. Bryleeh Henry, Alana Jancevski, Claudia Mihocic, Hayley Taylor-Young and Jessika Nash did not make the matchday squads through various reasons.

Despite this, the Young Matildas scored six times and conceded twice over two competitive games. There is some exciting depth at Leah Blayney’s disposal. The players available were able to produce two strong performances regardless.

A balance needs to be struck when talking about players in their formative years. There is an excitement building about this team. But excitement cannot lead to the burden of expectation from a football public hungry for success.

What we can tell from these two matches is that the Young Matildas should be compulsory viewing for fans of the sport when they take on the world.

The U20 Women's World Cupkicks off on August 10. The draw is scheduled for May 5.