The Legacy of Brandon Lee and Rapid Fire

On the anniversary of Brandon Lee's death, @Kaptinyap looks back on the very personal effect his career had. 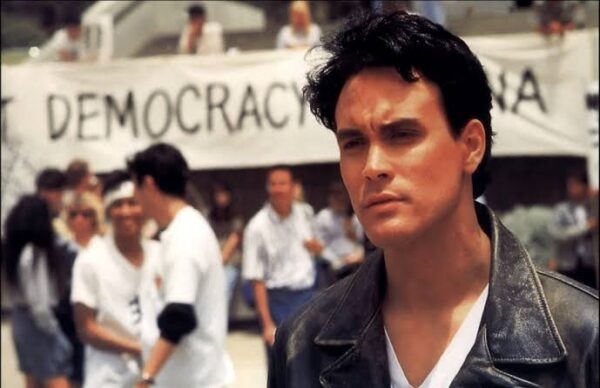 Growing up in a regional town in the 90’s meant that I was one of the only Asian kids in my school. Being half Chinese meant that I usually forgot that I was, when some body wanted to remind me of it, it was never for polite reasons.

It was one of the weirder racial insults I had received in my young life, but it’s the thought that counts. “Noodle sucker” was the taunt of choice and my fists clenched.

When I was very young, I didn’t understand it. As I got older, I was upset by it. By about the age of 10 I knew the response that made me feel better was retaliation.

Only this time I didn’t swing, I didn’t push. I suddenly felt too cool to do that, and I didn’t need to fight these guys. I was too good for them. There was one singular reason for this realisation. Brandon Lee.

The son of the legendary Bruce Lee passed away on the 31stof March in 1993. I don’t remember how old I was whenRapid Firewas introduced to me, but it remains a formative experience.

Seeing yourself on screen is something that cannot be underestimated. Brandon Lee was a half Asian actor, playing a half Asian character. It was as rare back then as it is now, even more so because he was the star and a bonafide action hero in an era filled with them.

Like his father, Lee was an action star. He did not have the global fame or even the quality of films Bruce had, but he shared his screen presence and charisma. Most importantly, I felt he looked like me, or what I would be if I was a movie star.

When I was a child, playing “action/army” or any variation with friends. Everybody would “be a guy.” Han Solo was popular, Rambo was another, some kids just called themselves Van Damme or Dolph.

Little Kieran wanted to be Indiana Jones, but the others wouldn’t allow it. I could be Short Round fromTemple of Doom, for obvious reasons.

There was no Asian action hero at the time in mainstream western culture. There especially was no half Asian one, Until I discoveredRapid Fire.

Was I too young to be watching a movie about a university student who witnessed a mob murder and had to punch his way through the Mafia, Chinese Triads and corrupt FBI agents?

Yes, probably, but for me, it arrived on schedule if not technically on time.

Here was a guy who had my background, starring in a movie and kicking arse and looking suave.

Rapid Firewas not a huge hit, but alongside Showdown In Little Tokyo,there was a buzz around Lee in 90’s cinema. He had fans, but only I could lay claim to his persona on the playground.

Looking back now, I can dig a little deeper about whyRapid Fireappealed to me. I have watched it every year of my life since.

Everybody who makes a racist remark ends up being kicked in the head at some point.  It is only there if you want to look for it, but it is satisfying. In that way, it has similarities to the explicitanti-racism that made his father’s Fists of Fury film so popular in the 70’s.

Lee is not in power at any point of the film, but he is in control over his own responses. His character has the skills to defeat anybody but is mostly reluctant to do so. It was a lesson for a young kid looking for media role models. You don’t have to go in swinging at every opportunity.

Most of my self-image as an adolescent can be traced back to Brandon Lee. I am half Chinese, or as I call it “Asian Fusion” and even in modern Australia it can be a confusing role to occupy.

You feel the stings of political and social Sinophobia but are also reminded constantly that you are not Chinese enough either.

Lee’s career made me feel ok with that. He was himself and could play Asian characters or American ones. In the cult classic,The Crow, his ethnicity is not a plot point.

Brandon Lee was just Brandon Lee. To many of us, he was not even the son of a legend but just a star who happened to be half Chinese.

Because of Lee, I could and did take martial arts lessons if I wanted. I was bad but it likely helped me move on to sports I was better equipped for.

When I was older, my teenage romantic [over]confidence was probably a result of watching Brandon Lee get the girl every year on home video. The concept of a male Asian romantic lead in an American setting was not really seen until Josh Chan inMy Crazy Ex Girlfrienddecades later.

When he died at the age of 28, it was a life extinguished way too soon and the end of a career that was just taking shape.The Crowbecame a franchise without him, but it would have launched him onto the Hollywood A-List.

His career was short, but his legacy lives on. It is almost 30 years since his passing, but he left an impact on my life and changed it forever.

Rapid Fireis not a five-star film. It will not make any critics list and it is not particularly unique among 90’s actions. There is no explanation for his martial arts ability, with his character being a fine arts student. No consequences for the multiple bad guys he kills through the film and a delightfully misplaced sex scene.

This year, like every other, on the 31st of March I’ll be wrist-deep in popcorn, in my Brandon Lee T-shirt, watchingRapid Fire