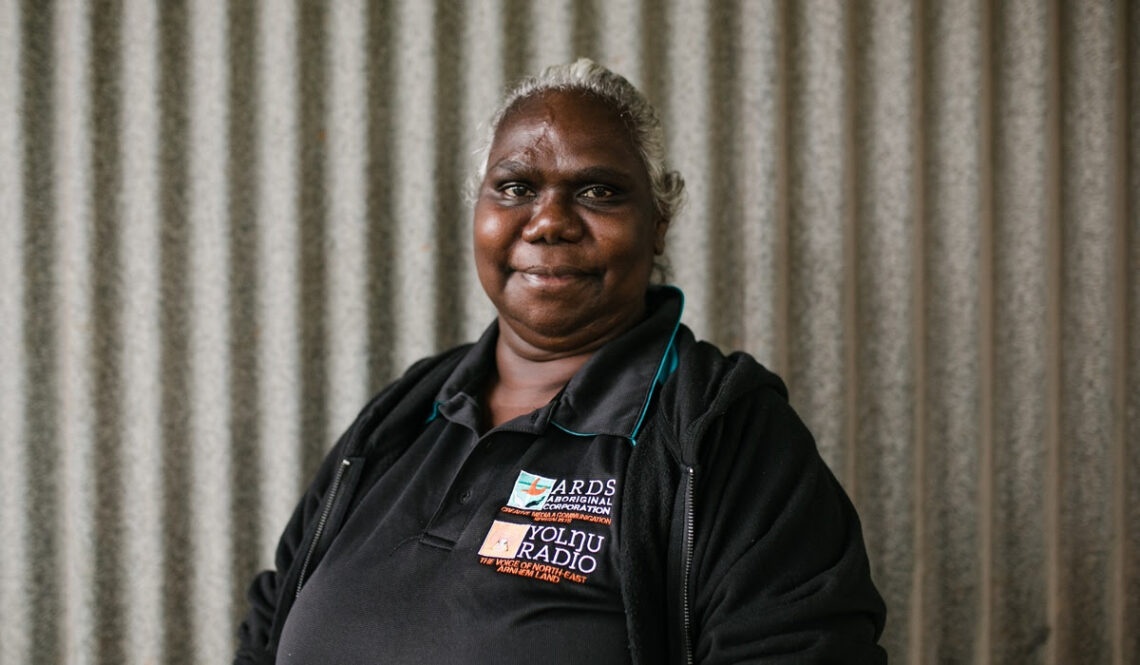 In Round 11, Sylvia Nulpinditj debuted as the first woman to provide an entire AFL match commentary in traditional Yolgnu Matha language.

In Round 11, Sylvia Nulpinditj debuted as the first woman to provide an entire AFL match commentary in traditional Yolgnu Matha language.

The AFL Round 11 clash between the Gold Coast Suns and Hawthorn at TIO stadium was a site of history as Sylvia Nulpinditj took to the commentary box and called the game in traditional Yolgnu Matha language.

As part of Sir Doug Nicholls Memorial Round, Ms Nulpinditj made her debut as the first woman to commentate an entire AFL game in traditional language. She did so alongside Yolgnu Radio broadcasters William Gumbula and Baykali Ganambarr.

Ms Nulpinditj was raised in Milingimbi in central North East Arnhem Land where the Yolngu Matha language is spoken. She has worked with the ARDS Aboriginal Corporation and Yolgnu Radio for a decade as a content creator.

Her historic commentary pulsed throughout six major communities and 15 homelands in North-East Arnhem Land and across Darwin and Palmerston. This was part of the AFL’s partnership with the Aboriginal Radio Alliance. Matches at TIO Stadium in Rounds 11 and 12 will be broadcasted to rural and remote Indigenous communities via local stations.

Through initiatives like these, the AFL has a significant opportunity to empower the use of traditional language within the league, starting conversations about the importance of Indigenous presence in all aspects of the sport.

The Round 11 match was only the fourth elite AFL game broadcasted in Yolngu Matha language, following Yolgnu Radio's coverage of the Dreamtime at the G match.

Yolgnu Radio manager Will Porter expressed his delight in having Ms Nulpinditj onboard before Saturday night’s clash.

"Yolgnu Radio is pleased to have been part of the 2022 Sir Doug Nicholls Round celebrations last weekend calling the Dreamtime at the G match and is proud to be part of this significant milestone and support Sylvia as she makes her debut."

“Not only is Sylvia a talented producer, writer and broadcaster, but she is a philosophical thinker who will bring a wealth of experience to the call on Saturday,” he said.

Her trailblazing commentary paves the way for the AFL’s continued engagement with First Nations women in all areas of the game.

This weekend's match at TIO Stadium between the Gold Coast Suns and North Melbourne Kangaroos will also be broadcast by radio to remote and regional communities in the surrounding areas.