Following the announcement that Bruce Willis will step back from acting, The Edge of the Crowd looked back at their five favourite films of his. 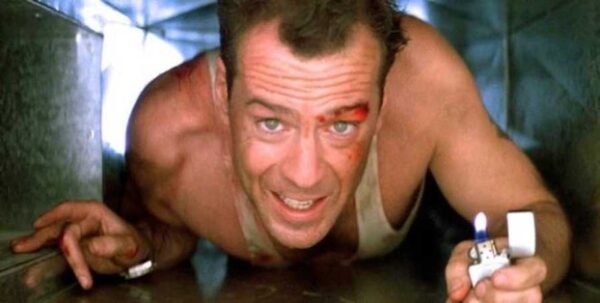 Bruce Willis has retired from the screen after appearing in over 100 films since 1980. The Action movie icon has had to give up acting due to a diagnosis of aphasia and leaves a legacy of influential and entertaining films.

His first gained fame with the detective series Moonlighting in 1985. The show, which co-starred Cybil Shepherd, has been credited as being one of the first television programs to combine drama with comedy.

His first foray into film set him on the road to action stardom. Along the way, he featured in box office blockbusters like Amageddon  and some critically acclaimed films such as Pulp Fiction.

Edge of the Crowdreflects on the best five performances by Willis in a leading role.

This sci-fi cult classic is still a divisive film, but Willis is perfectly cast as a cab driver thrust into a universe saving mission alongside a “perfect being,” a priest, and for a moment, Chris Tucker.

It is as bonkers as it sounds on paper, and Willis is perfectly cast as the nonchalant but skilled Korben Dallas.

His sardonic delivery and sense of humour grounds a movie that features Gary Oldman with a metal plate in his head and a slow-moving fireball as a villain.

It remains a popular film, and it is one of the best uses of Willis’ well-known persona outside of a Die Hard film.

This Terry Gilliam time travel film features a haunting, quiet performance from Willis playing against type. Gilliam reportedly gave Willis a list of his famous mannerisms and habits with an explicit request for him to avoid them on screen.

The effect is that audiences feel constantly uneasy with his character. We are so used to knowing where a Bruce Willis character stands and what his motivations are in a film. In 12 Monkeys it is intentionally muddled. James Cole is an unreliable protagonist. He is a criminal who was sent back to the 20thcentury to help humanity avoid a catastrophic virus.

Cole’s grasp of reality is questioned by those he encounters and eventually himself. Willis spends much of the film confused or panicked. It is an incredibly effective performance and subversive use of his star power.

Bruce Willis leads an all-star cast in probably the most entertaining film of his career. It is another unrealistic premise. An asteroid is headed for earth and NASA recruits the world’s best oil drillers to land on it, and drill a hole to place a nuclear bomb.

Armageddonutilises Willis’ swagger and confidence to full effect. Despite the implausibility, you believe he is the best oil driller, and as a result, you buy the rest of his frankly ridiculous crew.

Steve Buscemi, Michael Clarke Duncan, Owen Wilson, and Ben Affleck should not make a convincing team of outer-space heroes. But against all odds, this movie works.

Much of that is down to Willis’ stoic and exasperated performance which is his trademark. As with much of his filmography, there is a job to do, he is the only man to do it. Even if he does not really want to.

His closing monologueto Affleck and Liv Tyler is a tear-jerker scene in a film that is on the surface, ridiculous, yet loveable.

This is another of Willis’ more quiet roles in one of the biggest hits of 1999. He was only cast in the film as part of a compensation deal with The Walt Disney Company following the failedBroadwayBrawler.

Much of the reason the film works is that in 1999, audiences implicitly trusted Bruce Willis on screen. He projected a comfort and confidence that meant few people questioned the world the movie was set in.

When the final twist arrived, it worked all the better because the hero we were accustomed to seeing was not exactly who he seemed.

The Sixth Sensewas a small film by the then-unknown M. Night Shyamalan. Bruce Willis added some serious commercial appeal to a ghost story that might have otherwise only appealed to horror fans.

The result is one of theAFI’s top 100 filmsof all time and a career highlight-filled with them.

Was there any doubt this would be number 1?

Die Hard is one of the most influential, thrilling, and well-plotted action films of all time. Bruce Willis was a surprise casting in an era when the genre starred larger than life, near-indestructible muscle-men. His portrayal of John McClane was as an irritable, exhausted, funny, and emotionally vulnerable screen hero.

The very first scene sets up that he will be barefoot for the entire film. An hour later, his feet are cut up by glass and he makes a desperate plea over the radio to say goodbye to his family. This was unheard of in 80’s action cinema.

Willis’ comedy chops, honed onMoonlightingmade him perfect for the New York Detective. He added a sense of humor to McClane that worked in perfect tangent with the charismatic Alan Rickman in his Hollywood debut as Hans Gruber, the suave villain.

The central theme of the film is that McClane is making it up as he goes along. Willis’ makes it obvious that he has no plan and repeatedly pines that whatever he is about to do is a bad idea.

When he ties a firehose to his waist to jump off the roof and escape a fireball, he takes a moment to promise that he will never go up in a tall building again.

When Gruber points a pistol at him, he does not respond with an icy Arnold-esque quip, but with a sarcastic almost bullying, “no bullets!” taunt.

It was simple, fun and at the time it was revolutionary. McClane was in over his head and Willis perfectly portrayed it.

The star-making role almost never happened. 20thCentury Fox was contractually obliged to offer the role to Frank Sinatra. It was technically a sequel to 1968’sThe Detective,as both films were based on the same series of novels by Roderick Thorp.

It was then offered to Schwarzenegger, Stallone, and Mel Gibson. Willis was only able to play to part afterMoonlightingwent on hiatus for Cybil Shepherd’s pregnancy.

The result was a career-defining role in a film that tops action (and many Christmas) film lists and is a favourite around the world.