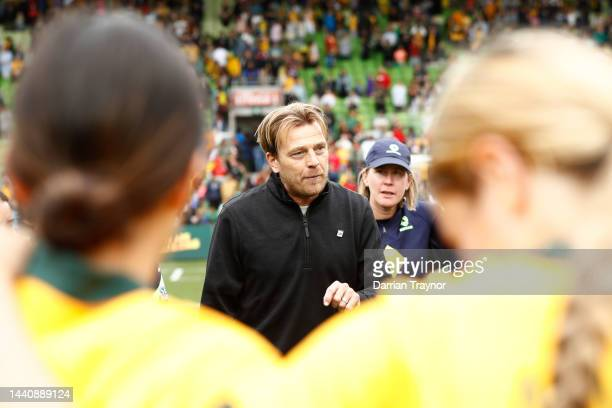 "It's a new game": Patience and early attacks key for Matildas over Thailand

In the final game of the year for the Matildas, coach Tony Gustavsson doesn't want a feeling of complacency to creep in against Thailand, noting the team's development over the past 12 months.

"It's a new game": Patience and early attacks key for Matildas over Thailand

In the final game of the year for the Matildas, coach Tony Gustavsson doesn't want a feeling of complacency to creep in against Thailand, noting the team's development over the past 12 months.

After a historic 4-0 win against Sweden on Saturday night in Melbourne, the Matildas are gearing up for the final friendly of the year, preparing to take on Thailand at Central Coast Stadium tonight.

On the back of the result against the world number two, Australia is riding high heading into the next fixture against Thailand, but aren't being complacent, with coach Tony Gustavsson understanding the team needs to get into the right mindset for a new opposition while continuing to play how they want - and have shown.

"Obviously it was a very good feeling after the game and we enjoyed that victory. Now it's a new game. We need to show up [today] as well," he told the media on Monday.

Thailand has never beaten Australia in eight attempts. And there is a 28-place gap between the two nations of FIFA's Women's rankings.

The closest Thailand has been to beating Australia is in the 2018 Asian Cup semi-final where Australia won on penalties (3-1) after the scoreline read 2-2 after extra time.

However, while the history of recent encounters play on Gustavsson's mind, he notes it's essential to get off to a fast start, take the game on from the first whistle and attack early.

"I think the number one key is to be patient but not patient playing slow, but patient to believe we know the goals are gonna come and kind of break them down," he said of his hope for the Matildas' start.

"We know they're gonna be very, very well organised, they've shown that before, and it's difficult to create those clear-cut chances, and then we need to break them down with time as well.

"But, I would love to see us flying from the beginning tomorrow with that mindset we had against Sweden with our regains, our transition games, our runs. Cause what can tend to happen when you play a well-organised team like Thailand and there's less space, is you stop running. And we are a running team so we need to run [today]."

With a Women's FIFA World Cup on the horizon in Australia in June 2023, Gustavsson, who has held the head coaching role for over two years now, has seen a steady build-up in belief in the squad, something he hopes they can hold onto throughout this upcoming match-up and leading into next year's tournament.

"I said in the circle after the Sweden game that I thank the team for the belief and the patience and the process that I've put them through. It's been a tough development journey," he said.

"But the players have been amazing in terms of the belief and the patience and the process and I think the players were really happy and proud about the performance against Sweden where they felt things were starting to come together.

"But we actually had that feeling earlier. We saw in 45 minutes against Canada, we saw in the October window, and now we saw it again [against Sweden] so slowly but surely we've seen pictures of it but now it's starting to come together [to be] more complete."