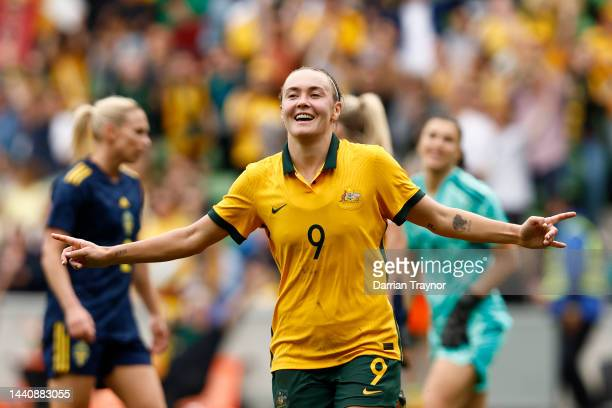 The Matildas' 4-0 victory against Sweden, helped by a Caitlin Foord brace, was a historic result for many reasons.

The Matildas' 4-0 victory against Sweden, helped by a Caitlin Foord brace, was a historic result for many reasons.

The Matildas toppled the world number two Sweden in front of 22,065 spectators at AAMI Park in Melbourne on Saturday afternoon, with the 4-0 victory a historic outcome for many reasons.

In a continuation of friendlies leading up to next year's home FIFA Women's World Cup and following two convincing wins against Demark and South Africa last month, Australia faced one of their toughest challenges yet.

The final result was Australia's first win against Sweden - the Tokyo 2020 Olympic Games silver medallists - since 1997, as well as being the team's biggest winning margin against a top-five ranked side.

The record-breaking victory was also the side's best result against a top-ranked nation since a shock win against the USA in 2017, and the first time Australia had kept a clean sheet since the Asian Cup in February.

During the match itself, the Matildas looked shaky throughout the first 30 minutes of play. In that time, Sweden had more of the run and more scoring chances in what was a high-intensity encounter.

However, it was Matildas captain Sam Kerr who opened the scoring with a goal - her 60th in the green and gold - against the run of play, eight minutes before the half. The goal would see Australia up one-nil going into the break, but it was the second half where the side really came to life.

The frenzied action was showcased by both teams who had chances close to goal, but the Matildas continued to provide the European heavyweights with plenty of headaches, unable to find the back of the net as the Matildas defenders stood up in front of goalkeeper Teagan Micah who also had to work hard between the goals.

The constant defensive pressure didn't faze the Matildas as the side routinely were able to get the ball out of Sweden's attacking zone, and find room to head on a few runs down the wings. It was this speed in transition going end-to-end that saw Australia capitalise even more.

Through controlled and precise touches and passing by the Matildas - and a couple of formation changes by coach Tony Gustavsson -, Caitlin Foord was able to score a second-half brace - making it five goals in the last three Matildas victories and second brace in as many matches -, while substitute Mary Fowler netted the remaining goal for the home team.

Following the match, Foord credited her recent form, including in this match-up, as the result of enjoying her football and taking in every moment on the pitch.

“I honestly think I’m just enjoying myself at the moment, enjoying my football," she told media post-game.

"I’ve always known I’m kind of at my best when I am enjoying myself and we don’t get many opportunities to play on home soil so just want to enjoy every moment of that and make the most of every opportunity.

“I think for us it’s all about feeling good and I think coming off the back of those two wins we wanted to keep that momentum into this one and we do feel good.

"I think we’re playing the style of play we want to play and we want to be aggressive and we want to take it to teams no matter who they are and I think that’s what we did today and the result showed for that.”

The Arsenal striker stressed the importance of performing for her team, no matter if it was at club or national level, crediting her time away from the game to refresh, and playing with the English-based side as key factors to taking her game up a notch.

“I just put it down to having an off-season. I think having time away from the game, having time to refresh and to miss the game a bit, I think that’s what I’ve needed," she told.

"It’s been so many years back and forward and not really having that time to just settle down and miss the game and I think that’s for a lot of us as well and making that move to England has given us the opportunity to do that.

"But on top of that, being at a club like Arsenal, obviously the level that I’m training in day-in-day-out and the demand to have to perform, otherwise, in a squad like that, surrounded by so many great players, if you’re not in form you’ll be on the bench so it’s just the demand to keep that week-in, week-out.

“I just want to do my role for the team and like I said, to have to perform week-in, week-out, obviously that carries over into national team as well. It’s a very competitive squad and we have so many great players here as well. You want to keep your spot and obviously do our role for the team and mine is to create and score goals so I’ve just really tried to do that.”

Matildas coach Gustavsson said the side worked their way into the game, especially in the second half, which worked its way into the final scoreline.

"I think we started off the game very well the first five minutes, pressed high, aggressive, could’ve scored among the first attack and after that I think we got way too stretched and passing in our defending, they played through us, played around us, and we could’ve been one-nil down," Gustavsson said.

"I have to credit the players. It’s not easy to send tactical changes onto the field during the game, normally it takes to half time but it’s something we worked really, really hard for a long time, to be a flexible team and a tactical team and work with game management and I think they took that on board bravely.

"Am I happy with this performance? Yes. But I’m not over the moon. I’m very humble about where we are and this was one game. It was a very equal game if you look at the stats. The thing that really stood out was, we were clinical in the final third. Our final passes and our finishing was much better than Sweden and that’s why we won the game.”

Leading into a home World Cup, Gustavsson commended the fan support and understanding what the hype will be like come July next year.

“We actually spoke about that with the team before, to look at this as a rehearsal when it comes to connecting with the fans, and get that vibe and energy and also be true to who we are," he said.

"In that sense, the crowd carries us through that second half as well, you can see how much the players enjoy the vibe out there.”

The Matildas take on Thailand in the next friendly fixture at Central Coast Stadium on Tuesday, November 15 from 7.30p AEDT.