King Richard allows Will Smith to completely inhabit a character while using all the charm that has made him a star, and it could win him an Oscar. 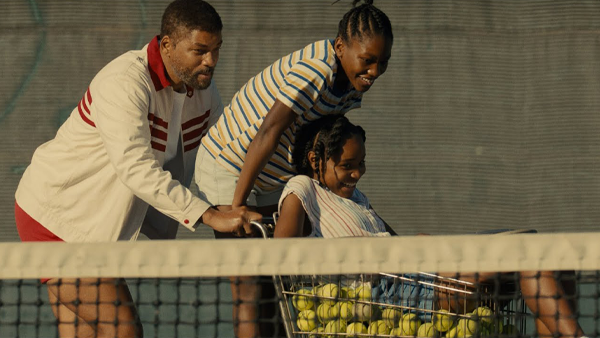 King Richardis the best chance Will Smith has had to win an Oscar in the actors four-decade career. Smith’s portrayal of the Williams family patriarch and his plan to guide Venus and Serena to sporting glory allows the former Fresh Prince to simultaneously play against type and lean into his strengths. The results are moving and entertaining.

The life and careers of Will Smith and Richard Williams are not so different on the surface. Although Smith found fame in high school as a rapper, his film career has been one of meticulous planning and shrewd decisions.

Talking toThe Hollywood Reporterin 2015, he detailed his strategy to launch him from television funny man to blockbuster star.

“I said to [manager James Lassiter], 'I want to be the biggest movie star in the world.' And he said, 'Okay. Well, let’s figure out what that means'," he told the publication.

“Also, we looked at all the different variations. What we found is at the centre, there were always special effects...there was always creatures, there was always a love story.

“So, we started looking for movies that had special effects, creatures, and a love story.”

The actor clearly found a kinship with the man whofamously wrote out an 85-page planfor his daughters to rise to the top.

Throughout the film, Richard Williams is seen reminding his family, coaches, journalists, and anybody who will listen of his plan. It is the source of much of the film’s conflict, heart, and humour.

Will Smith is probably best loved for his blockbusters likeMen In Black, Bad Boys, or Independence Day.But he has been on a quest for an Oscar for some time.

In the 20 years since his first Best Actor nomination forAli(in which likeKing Richard, he was able to inhabit a real life person by using his natural charms), he has increasingly searched for award-winning roles.

Concussion, Winters Tale, 7 Pounds,andThe Pursuit of Happynessbrought varying levels of acclaim and (in the case ofCollateral Beauty, ridicule) but he was clearly looking for anotherAlito show his full range.

InKing Richardhe has found this film.

In some ways, this is a role that has traces of his eternally popularFresh Prince of Bel Airpersona. Williams is a hustler, a man constantly underestimated, who uses his wit and determination to achieve his goals.

While the Will Smith of the 90s was known for his exuberant confidence, Richard Williams is portrayed as a man who prefers hard work to spruiking. Humility is his mantra, but self-belief is paramount.

When he berates a reporter for questioning Venus’ faith in herself, he is justified. There is no reason for the journalist to push her repeatedly.

This is not the fake it until you make it persona ofMen In Black, or even the legendary confidence of Mohammed Ali. This is a character who believes there is no substitute for putting in the hours, taking your time and showing the world what you can do.

Will Smith is able to channel his own career and persona into playing Williams. It suits him perfectly and feels comfortable.

He inhabits the character. The mannerisms, walk and speech patterns are well known by tennis fans and are done perfectly without it appearing as mimicry.

Ticking all the Oscar boxes

If there is a fault in the performance is that there is not much of an arc. Richard Williams remains much the same throughout the film. The way he tries to convince people to invest and believe in his daughters in the beginning does not change by the end when Venus is on centre court.

He stays a man of quiet determination for the entire runtime, and although it is a compelling performance it is one of restraint and not big dramatic moments.

However, it is a biopic, it is an entertaining, uplifting movie with a strong social message and quotable dialogue, and it is a movie star making himself less glamorous. The Academy voters love all these things.

It is also one of Will Smith’s best performances in years, and possibly his best movie sinceMen in Black III.

It is a crowd pleasing, dramatic role that he delivers excellently.

This is Smith’s best chance of an Oscar, and the film he most deserves to win for. Unlike efforts such as7 PoundsorCollateral Beauty, this film works. It is entertaining, uplifting, and funny, with Smith the driving force in nearly every scene.

In 2002, as Ali, he chanted “The Champ is here!”. 20 years later,King Richardmight finally mean The Fresh Prince receives his crown.