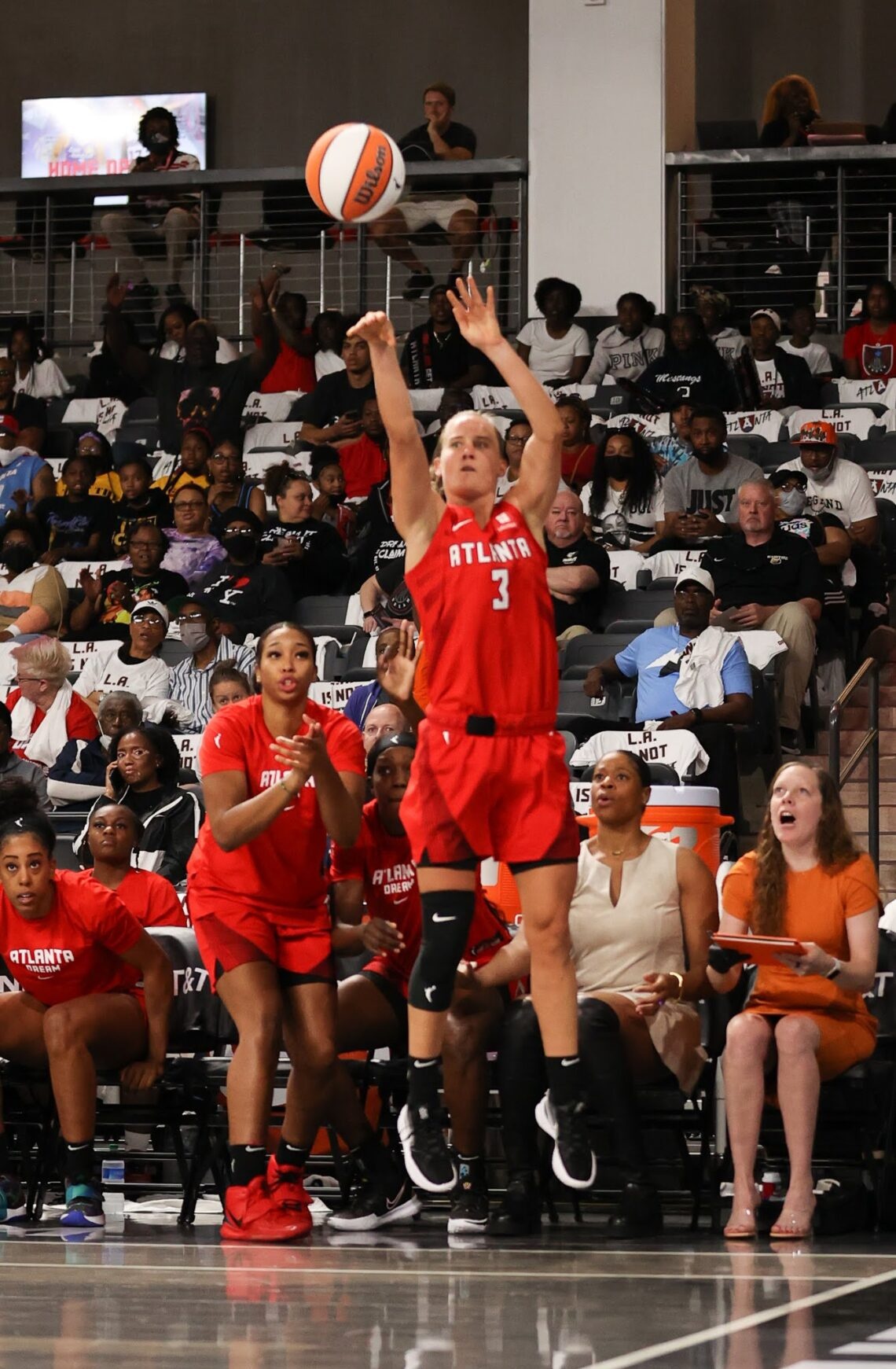 Keeping up with the Aussies in the WNBA: Week 3 Edition

Keeping up with the Aussies in the WNBA: Week 3 Edition

Week 3 of the WNBA season for the Aussies started off grim, brought some exciting moments, and ended with some sad news.

Before Week 3 commenced, the Chicago Sky announced the release of Anneli Maley from her hardship contract in order to activate Li Yueru.

Unfortunately, Maley wouldn't be the only Aussie released but we'll get to the next player soon.

Let's dive into how the Aussies played this week in the WNBA.

Kristy Wallace: There is so much I can say about the way Wallace performed this week but I'll leave it with one; astonishing. Even "astonishing" is an absolute understatement.

In a 70-50 loss to the Washington Mystics on May 24, she didn't put up the most eye-popping numbers at first glance at the box score. She finished with eight points. What she did do in that game is reset her career-high in rebounds with seven and added two assists, two steals, and a block to her name on 67% shooting.

Now here's the fun part. Kristy played a heavily crucial part in the Dream's 81-54 crusher over the Phoenix Mercury. Not only did she pour in a career-high 17 points, draining a career-high 7 of 15 attempts for 47% shooting from the field, but she also held her own against one of the toughest defensive assignments in the league.

Wallace was heavily involved in guarding the GOAT of the WNBA, league leading scorer, and five-time Olympic Gold Medalist, Diana Taurasi. So how well did Kristy defend the GOAT? She held Taurasi to two points.

Her performance in the win against Phoenix awarded her the Dreams' player of the game.

Alanna Smith: Smith's lone game of Week 3 game in a 95-90 grudge match loss against the Chicago Sky on May 24. She played for three minutes and went 0-3 from the field. She did grab three rebounds and had a steal and a block to her name.

One day later, the Fever announced theyfiredhead coach, Marianne Stanley and that assistant coach Carlos Knox would take over.

Everyone saw time on the floor for the Fever on May 27 as they defeated the Sparks 101-96. The only active player that didn't was Alanna. Two days later, Indiana announced they waived Smith.

Amy Atwell: The Sparks played four games in Week 3 but Atwell only appeared in one. In a 104-76 loss against the Las Vegas Aces, Amy hit the floor for the final five minutes of the game grabbing a rebound and hitting her first career bucket which was fittingly a three-pointer.

Liz Cambage: Cambage was quite literally everywhere on the court during the Sparks' cramped four-game week. In the loss against the Aces, she had one of her "down" nights which consisted of 10 points, four rebounds, and three blocks on 44% shooting. Two of her first makes were from beyond the arc.

In the next game, a 99-94 nail-biting win against the Phoenix Mercury on May 25, Liz looked great. She recorded 21 points while playing the bully ball down low. She hit 62% of her shots from the field against tough defensive assignments such as Brianna Turner and Tina Charles. She also added in seven rebounds, five assists, two steals, and a block.

The May 27th 101-95 loss against the Fever was a whole different story. Surprisingly enough, Liz did not get the majority of her points from the field. She shot a forgetful 2-11 or 18% from the field. Fever rookie Queen Egbo did an absolutely brilliant job of shutting Liz down in the paint. However, Cambage did get sent to the line 12 times and converted nine. She finished with 13 points, nine rebounds, and a block in the loss.

One of Cambage's toughest assignments faced her on May 29th. It's not one she hasn't met a million times before. She faced off against future hall-of-famer, and Minnesota Lynx great, Sylvia Fowles in what was a battle of the bigs in the paint. Fowles did an amazing not letting Cambage grab rebounds and impact the game on the boards. LA sneaked away with a literal last-second 85-83 win over the Lynx. She finished with 13 points, three rebounds, an assist, a steal, and two blocks.

Rebecca Allen: After a not so stellar season debut, Spida was back and better than ever on the May 24th 84-78 loss to the Lynx. Looking at the stat sheet, you wouldn't think 8-20, or 40%, shooting from the field is a call for being "better than ever." The Liberty are struggling this season and Allen was definitely the bright spot in that loss. She shot 4-8 from three which is an absolutely refreshing sight to see. She finished with a season-high 21 points and added two steals and two blocks to her name.

The next two games against the Covid riddled Seattle Storm were a time for her and the Liberty to show their talent. On May 27, the Liberty did lose to the Storm 79-71 in overtime but Allen did show up. She finished with 11 points and added seven rebounds, three assists, a steal, and three blocks to her line. Bec was definitely a crucial piece as to why the Liberty was able to come back and force the extra five minutes.

The Liberty once again lost to the Storm on May 29 but it wasn't as close to the one, two nights before. They were absolutely dismantled by Seattle with a final score of 92-61. Spida did play well recording eight points on 50% shooting, four rebounds, and two assists.

Sami Whitcomb: Now that I recapped what went on in the Liberty's three losses above, it's time to see how Sami fared. To the Lynx's credit, they do have a pretty solid foundation of perimeter defence. When you're a three-point shooter who thrives on the perimeter, you're going to struggle and have to find other ways to score and impact the game. Whitcomb only hit one shot and went 1-11 or 0.09% from the field and 0-9 from three, but she did show her passing abilities in fine fashion, dishing out nine dimes.

In the overtime loss against the Storm, Sami played what I'd say is her most well-rounded game of the season. She finished with eight points on 38% shooting but that's not where she had the most impact. She crashed the defensive boards with intensity, gathering seven rebounds. She facilitated like she did in the previous game and dished out eight assists. Her well-rounded line definitely helped yield the comeback to force overtime.

In the blowout loss to Seattle, Sami finished with six points on 29% shooting, grabbed four rebounds, three assists, and swatted away a shot.

Ezi MagbegorandStephanie Talbotboth missed their team's wins over the Liberty due to health and safety protocols.

They are both expected to be back and ready for their June 3 matchup against the Dallas Wings.

Week 3 was definitely a rollercoaster of a week for Aussie WNBA fans. See y'all next week for another update!