As January comes to an end we review our fiction book for the month of January which was Malibu Rising by Taylor Jenkins Reid. 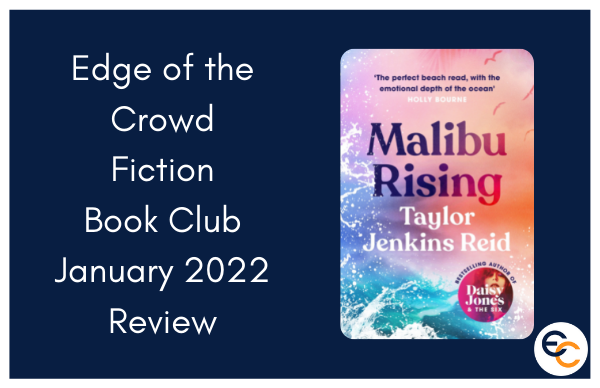 Malibu Rising by Taylor Jenkins Reid was our fiction pick for the Edge of the Crowd’s Book Club for January and it certainly didn’t disappoint.(Spoilers Ahead)

The author of the Seven Husbands of Evelyn Hugo and Daisy Jones and the Six has done it again with another captivating read in Malibu Rising.

The book takes place in August of 1983, as Nina Riva and her siblings Jay, Hud and Kit throw the highly anticipated end of summer party at Nina’s Malibu home.

The Rivas are a fascinating and well-known family in Malibu the four siblings are the children of legendary singer Mick Riva, who is compared to a Frank Sinatra type. With everyone fascinated by the Riva's and how popular the parties are everyone wants to go to the End of Summer Party.

Nina is a supermodel, Jay is a champion surfer, Hud is a photographer that follows Jay around the world taking photos then there’s the youngest Kit.

The only person not looking forward to the party is Nina herself who has never liked being the centre of attention and with her tennis star husband publicly walking out the door, all eyes will be on her.

Hud is keeping a secret that is threatening to tear the family apart and potentially destroy his relationship with his brother Jay. With Hud in love with Jay’s ex-girlfriend Ashley, the pair are having a secret love affair.

Kit was never one to dress up all fancy, like her sister Nina and much preferred the shorts and jeans to the sparkly dresses but wants his first kiss to be at Nina’s party.

The book takes place over the day of the party as well as flashbacks to when Mick met the kids mum, June, and their love affair as well as lots of up and downs as Mick left June and a young Nina and Jay for another woman.

Usually, I'm not the type of reader to enjoy books written in third-person point of view but Malibu Rising was the exception to this, it was a fantastic book from beginning to end.

The chapters were divided up with one character at the centre of attention of each chapter and while it was still written in that third-person point of view, it was almost like you were seeing each chapter through a different character’s lens which made reading a lot more enjoyable.

Nina's husband wants to take her back at the annual Riva party which is a similar situation as what Nina's mother found herself in all those years ago with Mick, she eventually was able to break that cycle and branch out on her own two feet.

Which is something that at the beginning of the book Nina wouldn't have ever considered, let alone done, with Nina essentially becoming the mother figure after June passed away, accidentally drowning. Nina branching out on her own and leaving her siblings behind was a massive step for her and was something I as a reader was glad to see.

Kit finding herself close to the end of the book and realising that she’s attracted to women and not men was good but the way that Jenkins Reid portrayed it, with at the start of the book Kit thinking she’d never be like some of the girls she was ‘drawn to’ from school with although she didn’t want to then realising while kissing Ricky,

Kissing Ricky felt wrong because he wasn’t Julianna Thompson. He wasn’t Cheryl Nilsson. Or Violet North. He wasn’t even Wendy Palmer, the waitress at the restaurant whom Kit always felt a thrill when they shared a shift

Having that was a full-circle moment, with Julianna and Cheryl being two of the girls that Kit mentioned closer to the start of the book then realising that she was attracted to them was a great way to start to wrap up the book.

While at times I found it weird to have mention of the side characters during the book the way Jenkins Reid was able to wrap it all up at the end of the book when the party was shutdown was a nice touch on what was overall a good story.

Jay and Hud didn’t allow for Hud’s relationship with Ashley and the fact that Ashley was pregnant with Hud’s baby didn’t tear the two apart. Although it looked like it when Jay found photos of Ashley and Hud together it seemed like something that the two couldn’t come back from.

After the ups and downs, the family went through and coming face to face with their father after all those years, for them to not let Hud’s relationship with Ashley tear them apart was a great showing of how strong the bond between them was.

The book itself was a real page-turner although it’s a slow-moving book it’s nonetheless a book that you can’t put down and perfect to read on a hot summer’s day, either on the beach or beside the pool as Taylor Jenkins Reid teleports you to Malibu in 1983.