The original cast is joined by some new faces for Jackass Forever. The fourth film in the series, opening in February exclusively to cinemas. 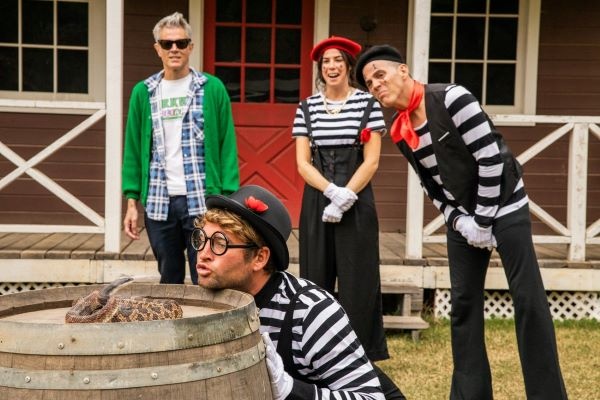 After a 12 year break, Jackass is back in cinemas on February 3 we will see the return of the hilarious mayhem in their latest big-screen appearance,Jackass Forever

Exclusive to cinemas, Jackass Forever will feature much of the original cast. They will be joined by some new faces in the form of Zach Holmes, Eric Manaka, Jasper, Rachel Wolfson and Poopies.

The film is the fourth in a series, that began in 2002 with Jackass: The Movie, which packed cinemas after years of cult popularity on MTV.  The crew last graced our screen with a 3D extravaganza of dangerous hilarity before moving into spinoff events like Bad Grandpa.

The entirely plotless movies typically move from stunt to stunt as the cast invent new ways to endanger themselves for an audience reaction.

Watching a Jackass movie in a cinema is a communal experience. The events on screen cause mass simultaneous expressions of horror, discomfort or laughter.

Details on what the film might contain are light as a surprise is much of the fun. But the film’s promotion has hinted at tasers, rattlesnakes, amateur rodeo and what appears to be a man being shot from a cannon.

In good news for fans, the Jackass crew’s appetite for celluloid insanity seems un-altered by age or unaffected by any alleged maturity.

On February 3, the world will once again be greeted by that famous warning sign and the voice of Johnny Knoxville as he introduces something that might never be forgotten in Jackass Forever.

Knoxville vs Butterbean - Jackass The Movie

Jackass is made up of skateboarders and stuntmen. When the show first started these were people accustomed to pain and risk. Johnny Knoxville does not fit not this category.

Knoxville’s appeal is his goofy disregard for self-preservation. Nowhere was this clearer than when he “fought” heavyweight boxer Butterbean in a small shop.

Butterbean did not hold back unleashed a brutal pummeling of Knoxville who’s only question as he recovered was “is Butterbean ok?”

Combining a simple concept with perfect execution, Knoxville stands on open grass in a snorkel and waits. Then a wall of water simply washes him away while the camera remains focussed on the now-empty frame.

Like many of the best Jackass moments, this is hilarious for its pointlessness.

A simple greeting of “how you been… high five?” is met with a giant spring loaded palm swinging around a corner to smack their friends onto their backs.

The brilliance in this is that the instigators managed to design, construct and position the giant palm without Bam Margera having any idea of its existence until it was too late.

TEN PEOPLE WHO COULD BECOME THE NEXT JAMES BOND

This is so stupid it borders on genius. Dressed as ducks, some of the cast members are catapulted into the air over the lake. Others are sitting in a boat below armed with paintball guns.

The sight of a feathered man tumbling through the air while being hit with plastic pellets stays long in the memory.

An early feature while still on MTV was the torment of Bam Margera’s long-suffering parents.

In the first film, they simply put an Alligator on their property. By the third, things had to be escalated.

As they checked into their hotel, Pam and Phil Margera were greeted with a rampaging Gorilla (Chris Pontious in costume) and its panicked trainer.

The results are frighteningly convincing and Phil locks himself in the bathroom while his wife flees.

It is a cruel stunt but ultimately harmless and honestly, difficult not to laugh at.

Penny Farthing’s are stupid, and nobody has any business riding one in the modern age.

Knoxville and Ryan Dunn not only climb onto these ridiculous bicycle’s but attempt modern BMX tricks on it. What happens next is no surprise but anticipation is everything here.

“My face stopped my body from getting really hurt” groans Knoxville after the inevitable.

Jackass Foreverwill be exclusive to cinemas and is produced by Paramount.