"It's musical storytelling": the Music of John Williams in concert

The @artscentremelb will host @melbsymphony on Wednesday as they perform the greatest music in film history. @kaptinyap spoke to conductor Andrew Buc about The Music of John Williams. 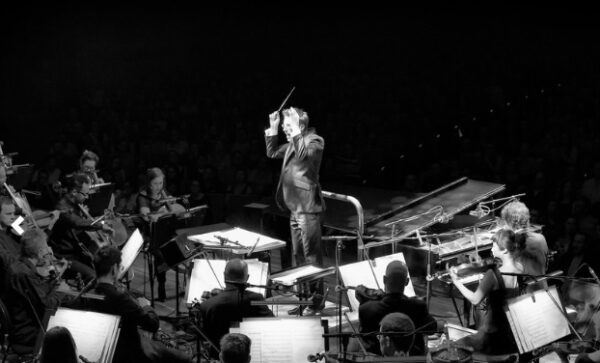 On Wednesday night, Melbourne’s best musicians will perform cinema’s greatest music. The Music of John Williams promises to be the latest in a string of amazing shows by the Melbourne Symphony Orchestra. It is one that conductor Nicholas Buc is particularly excited to perform.

“It’s the chance to be able to explore how varied his career has been,” Buc told The Edge of The Crowd.

“That’s probably the primary thing that excites me the most.

“His career has really encompassed everything from the famous iconic themes that we know and love to some more unusual moments.”

“We’ve got a few surprises, especially for this performance.

We do have Andrew Pogson and Dan Golding from [film music podcast] The Art of the Score along.

“I think that’s going to be quite a strong point of difference from some of the other Williams concerts we’ve done.”

The MSO has a reputation for crowd-pleasing concerts that bring the music of cinematic scores to life. They have performed live scores to films such as The Godfather, Home Alone, Jurassic Park and the Star Wars Saga. It is a unique way to watch a movie and an incredible way to experience an orchestra.

The Music Of John Williams is hotly anticipated by film and soundtrack fans. It will take audiences through the history of John William’s remarkable career. As a Williams superfan and expert, Buc will be performing some of his favourite music with the MSO.

“One of my favourite scores of all time is The Empire Strikes Back,” he says without hesitation.

“Being able to perform anything from that score is pretty incredible and amazing and gets a big smile on my face.

“We do have the MSO Chorus, and so that in itself has trumped any other previous love that I have had for any particular score.

“Any piece that they feature in I think going to be something quite different, special, and unique.

“The thing I am most looking forward to is all the chorus pieces.”

The mention of live vocals gives the strong hint that Duel of the Fates from The Phantom Menace will be played.

Although Buc cannot be pressed into revealing any secrets. He will only admit that there will be surprises.

“There may be some flying music, that’s all I’ll say,” is his response when asked if the theme from Hook will be performed.

John Williams has composed the scores to countless iconic films since the 1970s. He first burst into the mainstream culture with the simple yet iconic Jaws theme.

His career is filled with a variety of emotive, catchy, and memorable scores. With a near endless list of options to choose from, how did the hosts of The Art of the Score choose what to include?

“It really was a case of ‘do we need to hear it or can we use something else?’ says Buc.

“It really was this balancing act of how much do we need to keep in there for the iconic fans?

“What has been done too much, what can we lose.?

“I’m not going to say we don’t have any, but we have some unexpected Harry Potter music.

“Maybe with Star Wars, we’ve thrown some things out that are completely obvious to play and replaced them with some things that are like, ‘I forgot about that one.’”

“We’re trying to trace a light history of this composer that still covers all his bases and hits all the emotional feels without overbearing itself and being surprising.”

"It's musical storytelling in the direct sense"

As one of the co-hosts of every soundtrack fan’s favourite podcast, Buc has a love for film music rivalled by few.

The Art of The Scorediscusses the music of cinema in an expert way that is easily understood by the layman and appreciated by aficionados.

Students of classical music and those who can barely hum in tune will learn a lot from listening to an episode. The music is placed in a historical context and entertainingly discussed.

Film music has changed over time, which is one of the reasons for Buc’s reverence for Williams.

“There’s more a focus on rhythm and mood as opposed to melody,” he says.

“That is the difference, it’s the lack of melody in contemporary film scoring.

“Sometimes directors are cautious about saying too much with music.

“That is reflected in how the scores are written.

“They want them to be a bit more ambiguous, to set a mood and let us not bash the audience over the head with musical storytelling.

“In some ways, Williams’s sound is an old fashioned one.

“It is musical storytelling in the most direct sense. As a musician and as players I know that it’s much more satisfying to perform music like that, but you’ve got to move with the times.”

The challenge of Harry Potter

Satisfying indeed, but not easy. Orchestras must have the stamina of professional athletes to perform these scores. Buc recalls one particularly gruelling series of, albeit phenomenal shows.

“Often the biggest challenges for the orchestras are a stamina thing.

“Scores that are long and big. The hardest day was when we had to do the first two harry potter films in one day.

"The afternoon was Philosophers Stone, in the evening we did Chamber of Secrets.

“One, they’re super difficult scores to play, and two there’s two of them.

“There’s a little bit of crossover in music, but not a huge amount.

“So really just learning a gigantic two house symphonies, and really just keeping up the stamina and the quality of playing is quite draining.

“Both for me and the orchestra.

“Aside from mental and emotional, it's actually the physical stamina of playing those fast passages.”

The Music of John Williams sold out fast. He is one of the most revered and prolific film composers of all time.

“I’m a massive [Jerry]  Goldsmith fan,” says Buc when asked what other composers would make for a good concert.

“I’ve always felt that he falls in the shadow of Williams, but in his own right has written some equally fantastic music.

“It’s very rare to find Williams films that aren’t that great, most of them are fantastic.

“Ennio Morricone, we know from his spaghetti westerns.

“He’s had quite a varied career and a very interesting composer from trying lots of different stuff.”

“He has a massive catalogue of stuff.

“The one tricky thing about his music is performing it with an orchestra often isn’t as successful as you think because his sound is so produced.

“It often uses orchestra mixed with sampled instruments. Or recorded multiple times so you get the sound of 30 cellos instead of 10.

“That’s what gives it its iconic sound, where often if it’s performed live, it can sound a little limp.”

For now, all eyes are on Hamer Hall on Wednesday night. All ears will be treated to the music of John Williams, performed by the MSO.

It promises to be an incredible live show and a musical journey through the history of modern cinema.