'It's great entering this profession at 50': Kelly Mac at the Adelaide Fringe

Her @ADLFringe show is called The Wrong Side of 50" but Kelly Mac says it is the perfect time to be a comedian. 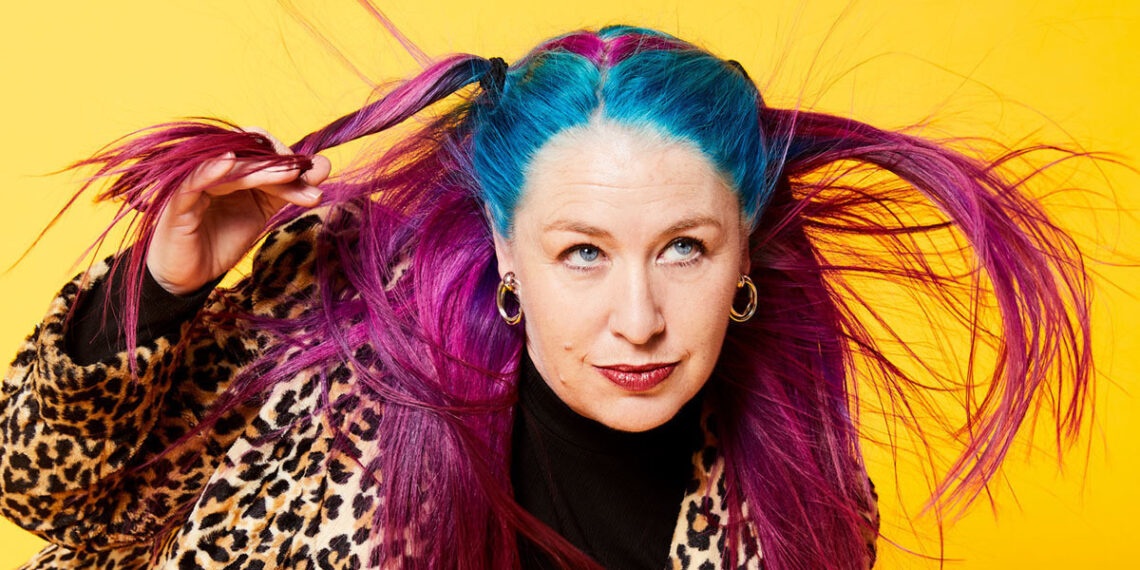 Her show is titled,The Wrong Side of 50but Kelly Mac is in her prime as a comedian. As she prepares for the Adelaide Fringe Festival, she talks to The Edge of the Crowd about her career so far.

While society tends to regard middle age as a period to begin to slow down, Kelly Mac says that it is the perfect time to be a comic.

“There’s so much material, and people want a laugh more than ever. Despite 'Apocalypse Maybe', stand-up is a’boomin’.

“It’s great entering this profession at 50," she reflects positively.

In hindsight, Kelly Mac’s career has always felt inevitable. She estimates that she changed schools ten times as a child. Getting laughs was an ice breaker or defence mechanism.

“It’s an old story,” she reflects.

“Get them laughing at the new kid before they think of doing it for themselves.”

Throughout her working life, Mac has edged toward her current career. She now encourages crowds of people to laugh at the absurd, taboo and something unthinkable.

“There’s always been an element of the comedic performance to whatever role I’ve had.  I’ve had a few [such as], aerobics instructor, lawyer, Centrelink stormtrooper.

“I’m a typical Gen Xer in that my CV looks like a patchwork quilt sewn by someone on acid.

“Commercial radio was where I got the inkling that comedy was something I was not only good at but could do professionally.

“But it was when I stopped drinking for Australia that I decided to take the leap.

“Baby steps, a LOT of support from my bestie and family, and two years later I’m a comedian and independent producer.”

“A few days ago I got a complaint from a politician – a senator, no less – about my ‘Boomer parents who refuse to die’ bit.

“I mean, that’s hilarious, especially at a time when every second headline is ‘And another senior dies in an aged care facility due to [insert government-or-corporate-act-of-neglect here]’.

“Life is just full of these wonderful contradictions and hypocrisies.”

Occasionally, audiences will find things a little too relatable amid the laughter.

“I was doing a bit about a weekend away and I said, ‘so Greg and I walked back to the hotel for an exciting afternoon of checking our super and denying climate change.’

“It brought the house down.

“Greg was swamped after the show by Boomer fan-boys, saying ‘That’s me and my wife! That’s exactly what we do!’

“I could only shake my head. It’s like running up to someone and shouting, ‘Check out how uncool I am’.

Wrong Side of 50is constantly being improved as a show. Mac likens the process to her weight loss plan,

“It’s still taking shape. And I’ll be refining it, as well as my glutes, at Fringe.

“I had a trial performance here in Coffs Harbour which was everything I could have hoped for.

“It was a great venue, a friendly home crowd.

“But not so friendly that they didn’t make clear which jokes worked, which ones were still a work in progress, and which ones should be shot without trial.

“Fringe will be the proving ground and I invite peeps to come along and be part of the creative process.

“We also have my dramaturg, Marcel Blanch de Wilt, to thank for any good bits in the show. He was like the Borg Queen – he brought order to chaos.”

"I hear he's not happy about it"

She mines her own life and experiences for material. Mac says that about a year ago she started noticing common themes running through her writing.

“It turns out, mine are not so different from every other comedian hitting middle age.  Parenting and the aging process, original, huh? “

Although her material is hilarious honest, there are still some lines that she will not cross. Although, not for any moral reasons.

“Perhaps my one point of difference is that I don’t do dick jokes…I’m just bored. You would be too if you’d had sex thousands of times.

“You wrack up the numbers when you start having sex at 17, get married at 21 and don’t die.

Her husband Greg is referred to regularly on stage, where she makes it clear that he is not her best friend. Mac says this was of no surprise to him, and he understands that these are two very different roles.

“It’s a best friend’s job to tell you that that your arse looks fat in that dress.

“A husband’s got to find you attractive even when you’re wearing jeggings and you’ve got thighs in two time zones.

“A best friend is supposed to recommend a good divorce lawyer, not break the land-speed record to get to the phone first.

“And besties can’t really be replaced, which is the exact opposite of spouses if the current divorce and remarriage rates are to be believed.

“Which leads me to my final point: Don’t feel sorry for Greg, ‘cos here’s what would happen if I died tomorrow. We’d all be very sad, and in a year, he’d be with somebody else.”

Her son Bill does not escape comedy’s razor either. Kelly Mac mocks him as an “ugly baby” as a statement of fact, not opinion. Although she assures that he’s better now as an adult.

“I hear he’s not happy about it [the joke], and I suggest he looks in the mirror the next time he sheds a tear.

“Bill’s ugly duckling days are far behind him. And isn’t that the way? I was a beautiful baby, whereas Kate Moss and Elle MacPherson looked like frights. I rest my case.

“Actually, Bill should thank his Dad and I for his genetic makeup because it never helps kids to be too good-looking or rich.

“You don’t get character through sunshine and roses. Of course, if I really cared about Bill’s success in life I would have died when he was ten.

“That’s how you get your Bonos and your Bob Geldofs.”

Parenting is a big topic in Mac’s material. A cornerstone of her beliefs is an appreciation of one of Australia’s favourite foods, Devon.

“It’s the bomb. A few slices of devon and tomato sauce tucked between white bread slathered in margarine. That’s the taste of 70s and 80s Australia.

“I was raised on devon and I was grateful. It was a time when parents got it right. They didn’t turn themselves into knots trying to create the perfect childhood for their kids.

"Parenting isn’t like surgery or flying a plane - 80% really is good enough.

“Go easy on yourselves, people. Your kid’s not supposed to grow up with a Masterchef in the kitchen.

“They’re supposed to eat their 10,000th devon sandwich, think ‘I can’t wait to never eat this shit again’, pack their bags, get out there, and learn to cook for themselves.

"That little slice of devon? That’s the circle of life right there”

"It helps to have grown up with funny people"

Her own family helped develop her sometimes dark, cathartic sense of humour. Kelly Mac credits them with teaching her the value of laughter.

“It helps to have grown up with very funny people, she says.

“My father is easily the funniest person I know. My mother and my aunties – [shout out to Sue, Marg and Cath] also have top senses of humour.

“They’re all different, everyone’s had their hardships, but what they share is a deep sense of compassion and an ability to laugh in the darkest of times.

“When I hear people say, ‘Oh, you can’t laugh at that’, they forget that laughs are like tears - they’re both stress-relief. Laughter and crying help us deal with the pain of life.

The Adelaide Fringe is popular among comedians. Kelly Mac loves it for many personal and professional reasons.

It offers her the opportunity to work with fellowTake 3 members Kru Harale and Annie Boyle, and catch up with family in South Australia.

“If you think I’m funny you should meet my Mad Aunty Sue and cousins. I’m the wallflower of the group,” she says.

The festival offers her and others the chance to see show after show and support other emerging talents. Although she loathes networking [“ one of the many reasons I quit law”] she does love the Honey Pot Hives where bookings and opportunities can be made.  She a delegate for the east coast.

As always, the perks of showbiz are always worth celebrating.

“Of course, the highlight is living in a three-star hotel across from a McDonalds for two weeks.

“I live in regional NSW so three stars and Macca’s is, like, you’ve made it in life.”

Bookings for Kelly Mac: Wrong side of 50 can be made here