Gold, Green and Diamond - Aussies dominate on Day 1 at CWG

A gold rush on the opening day of Birmingham 2022 kicked off an exciting campaign across multiple sports at the Commonwealth Games for Australia. 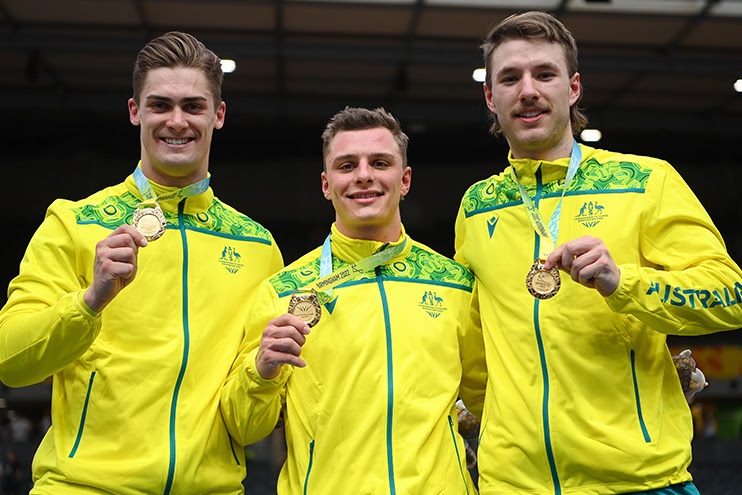 The Australians donned their signature green and gold on Day One of the 2022 Commonwealth Games, and hit the ground quickly. Australia was in the medals from the first moments of competition, and kept that advantage all the way through the day.

At the end of the first day, Australia is first on the medal tally, with 8 gold, 4 silver and 4 bronze making up their 16 medals.

Dolphins Dominate in the Pool

Of the seven gold medals available on the first day in the pool, Australia took home five. But that wasn't even the biggest achievement of the day. Podium sweeps are rare in elite sport, but to have two podium sweeps in one night is unbelievable.

Ariarne Titmus took out the gold medal in the women's 200m freestyle, in an expected result after her strong Olympics a year ago. Her 1:53.89 was a new Commonwealth Games record, as she led home a star-studded field.

Coming in close behind, just touched out for gold was teenage sensation Mollie O'Callaghan. O'Callaghan's 1:54.01 was just a touch behind the Terminator, as Titmus is affectionately known. Behind the duo, leading ahead of the field was Madi Wilson, who finished in 1:56.07 to take home bronze and complete the sweep.

Elijah Winnington got it done at the Commonwealth Games in th men's 400m freestyle, a year after struggling at the Tokyo Olympics. His time of 3:43.06 was behind the world record, despite starting ahead of the mark. It was enough for gold, with Sam Short coming in second with a time of 3:45.07.

A year after missing out on an individual swim in the event at the Olympics, Mack Horton was the second-fastest qualifier for the final. He wasn't able to convert that into a gold medal, but he did come home fast enough for a bronze medal in 3:46.49.

Australia was the fastest team in the heats of the mixed 4x100m freestyle relay, as Flynn Southam, Zac Incerti, Wilson and Meg Harris took out the heat in a blistering 3:22.14.

With a completely fresh team for the finals, Australia was confident that the quartet of Kyle Chalmers, William Xu Yang, Emma McKeon and Mollie O'Callaghan was primed for the final.

Chalmers was the second leg, and made sure that the Aussies were in clear waters when O'Callaghan hit the water. O'Callaghan's 52 second split was lightning quick as one of the best in the field. It would be trumped by her teammate McKeon, who was a fraction of a second faster to anchor the gold medal.

Ellie Cole wraps up her career in green and gold

Ellie Cole was in her final international swim, in the women's S9 100m freestyle. She didn't have the speed to manage a medal in her final meet, but she finished in fifth in a blanket finish. A close race, won by Sophie Pascoe was made richer for the emotional moment shared in the pool after the race.

Cole's teammate, Emily Beecroft turned midway through the field, but came home strong to take a silver medal behind Pascoe, and win herself a Commonwealth Games silver medal. Australian teammate Ashleigh McConnell finished fourth, just a fraction of a second ahead of Cole.

Cole's final swim brings to an end a decorated career, as Australia's most decorated Paralympian hangs up the goggles. It wasn't the swansong that Cole may have hoped for, but it was clear that she was soaking up the atmosphere of the competition.

Jess Gallagher and her pilot Caitlin Ward were under pressure in the Women's Tandem B Sprint. In the best-of-three final, the Australians jumped out of the blocks to take the first sprint in a rapid finish. They were clocked at just under 62km/h for the final lap, as they overpowered the Scottish duo.

The second sprint was more dramatic, as Gallagher and Ward were inches from disaster. They dropped in behind the Scots to start the sprint, a little too close behind their opponents and almost clipped the wheel of the tandem. In the end, they kept upright, composed themselves, and came home like a house on fire to take gold in the second sprint.

The result means Gallagher can add a Commonwealth Games gold medal to her existing Paralympic gold medals from both the Summer (cycling) and Winter (skiing) Games.

Baker the recipe for gold in Team Pursuit

Georgia Baker was the anchor for Australia's Team Pursuit on the track, joining Sophie Edwards, Chloe Moran and Maeve Plouffe. The Australian quartet broke the Commonwealth record in the heats with a time of 4:14.65.

Coming up against the team from New Zealand in the final, the Australians set the bar even higher, breaking their own Commonwealth record, and dominated the Kiwis by over five seconds. Baker and Plouffe showed off their road cycling endurance, as they took long, fast turns in the back half of the event to drag the Australians away from the competition and came home like a house on fire.

The New Zealand team was depleted from the start, as their preferred fourth rider, Ally Wollaston was ruled out of the Commonwealth Games last week, after crashing in the Tour de France Femmes and breaking her wrist. In her place, Emily Sheerman started the race to make sure New Zealand could compete, before peeling off the track immediately.

The men's sprint distance triathlon was one of the first medal events of the Games, and Aussie Matt Hauser started strong. Alex Yee of England backed up his Olympic gold medal with a Commonwealth Games gold, as he dominated the race from the start.

Hauser and New Zealander were locked in a battle for second, after Wilde was forced to serve a 10 second penalty for undoing his helmet too early in transition. Hauser gave it his all, and emptied the tank on the final sprint to push for silver, but was three seconds behind Wilde as he took home bronze.

Aussie Jack Birtwhistle was 32 seconds further behind to take fourth, in a strong performance for the two Australians. Teammate Brandon Copeland finished further behind, after his aggressive race style left him in 22nd and exhausted.

The Australian Diamonds thumped Barbados in their opening group match 95-18. Starting with a lineup that mirrors their expected full-strength side, the Australians were out of the blocks quickly, and kept the foot on the gas all the way through.

A slightly slower second half showed the pitfalls of a condensed competition, where the Diamonds will play five pool matches in seven days. Cara Koenen looked to be finding her feet in goal shooter in the second half, but it was the performance of Sunday Aryang and Ash Brazill in the midcourt that was dominant.

Brazill and Aryang turned the ball over at will, while Kiera Austin celebrated her return to the Diamonds setup after a crushing knee injury with a strong performance across both wing attack and goal attack across the match.

After the start that Courtney Bruce and Sarah Klau both had in their first appearances for the Games at goal keeper, there will be lots of optimism about the Australian combinations after their first outing.

The women's team of Alex Wilson, Lauren Mansfield, Lauren Scherf and Marena Whittle dominated Scotland 21-9 in their opening matchup. In their second match, the Kenyan team put up a tough fight, but the Aussies had enough to win 21-15.

The men's wheelchair team kicked off their campaign with a 13-11 win over Canada, as Lachlin Dalton, Luke Pople, Jake Kavanagh and Kurt Thomson closed out the match in style.

Darcie Brown was the first Aussie to strike, drawing an edge that Smirti Mandhana edged to Alyssa Healy. Other than that, it was a tough bowling innings for the Australians, as the Indian batting lineup piled on the pain. A calamitous runout for Yastika Bhatia wasn't enough to slow the runs.

Shafali Verma gloved a Jess Jonassen delivery down the leg side, as it was sharply taken by Healy just after the midpoint of the innings, Jonassen baited Jemimah Rodrigues into holing out to Meg Lanning as the Indians finished 8/154), as Jonassen struck for 4/22 from her four overs.

The chase started in disaster, as Healy was removed for a duck on the second ball of the innings. Within a few overs, Lanning and Beth Mooney were also back in the sheds, as Australia was 3/21 after three overs, and 5/49 in short order after that.

Ash Gardner saved the Australians from potential disaster, with her innings of 55 from 35 balls was enough to win the match, after a slow start. Alana King played a key role alongside her, stopping the collapse and making sure Gardner didn't run out of partners.