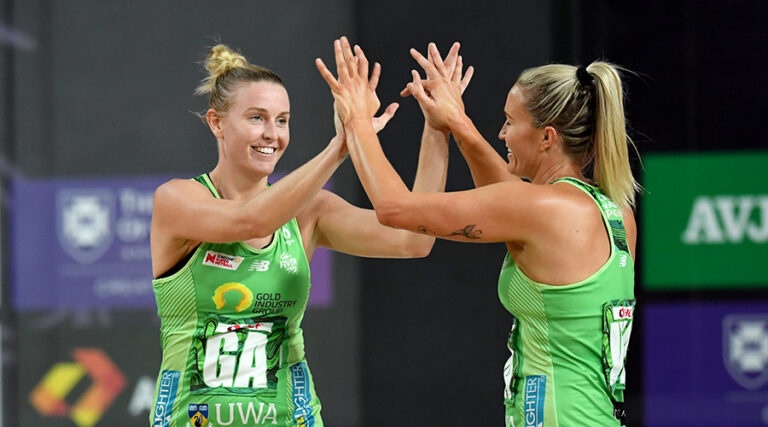 Fever given the sweats, but shake off the Firebirds to win

The West Coast Fever were challenged by the Queensland Firebirds, but found an extra gear in the second half to take an eight goal win.

Fever given the sweats, but shake off the Firebirds to win

The West Coast Fever were challenged by the Queensland Firebirds, but found an extra gear in the second half to take an eight goal win.

The West Coast Fever were challenged by the Queensland Firebirds, but found another gear in the second half to get past the Firebirds, and win 77-69 in Brisbane.

The Queensland Firebirds started quickly, springing out to a four goal lead in the opening moments, as Gretel Bueta and Donnell Wallam were on fire early.

Further up the court, Kim Ravaillion and Lara Dunkley started fast, as both pushed their selection credentials, with Australian Diamonds coach Stacey Marinkovich watching on.

The Fever chose to start a new combination at the first centre pass, with Alice Teague-Neeld still out, under the COVID-19 protocols, with Verity Simmons starting on the bench. Jess Anstiss and Emma Cosh started in centre and wing attack respectively.

At the end of the first quarter, the pace was high, and there was nothing between the two sides, at 18-18.

The two sides traded goals throughout the second quarter, with the pace high, and both sides bringing defensive intensity.

The Firebirds had a run of six goals to give themselves an advantage through the middle of the quarter, before a late super shot barrage from the West Coast Fever brought it back to just two goals at half time.

Dan Ryan injected Verity Simmons and Chelsea Pitman into the Fever's midcourt in the second half, and the experienced heads had an immediate impact. Crisp passing, patience with the ball and driving hard towards the circle edge, the Fever started to gain an upper hand on the Firebirds.

Despite the efforts of Ruby-Bakewell Doran and Eboni Usoro-Brown, Jhaniele Fowler and Sasha Glasgow were starting to get on top of the Firebirds defensive circle.

In the end, the Fever were able to hold off the Firebirds in the second half. The Fever controlled the flow and the pace of the game, and it left the Firebirds to rue shooting just over 80 per cent for the match.

After the match, Firebirds coach Megan Anderson was left to rue the second half fadeout, and the inability to capitalise on the Fever's mistakes.

"Well I think they learned that we can definitely beat Fever," Anderson said.

"The first half showed us that we can do that, but it's just about being consistent for the whole game because they just really punish you for little errors.

"They can score so quickly, so consistency is definitely key and making sure we score off our turnovers, I think that was probably one of our stats that let us down today.

"[Scoring from turnovers] is something you’re always working on as a team, because they’re always just ones that you can get. You can score off centre passes, but turnover ball is so hard to get against so many teams that you want to make the most of it.

"It's something we did really well last week and we wanted to continue, but obviously the Fever have a great dynamic defence end, so they did well to pressure us into turning the ball back over, but it's something we will look to fix on Tuesday."

Anderson was very happy with the performance of her defensive end, despite the big score, as they made it difficult for the Fever throughout the match.

"There's definitely lots of trust being built in the structures we’re putting out there, and I know those structures are working because we are turning over some ball. Ruby and Gabs are working well across the line together and Eboni is building veery week as well.

"I was particularly happy with how Kimmy [Jenner] came on as well, she just did exactly what we asked of her and she attacked the ball and she turned over a couple of balls for us and was really safe in attack, so she came on really well as well.

Anderson was particularly full of praise for Ruby Bakewell-Doran, who has come on in leaps and bounds since being elevated from a training partner over the offseason.

"Ruby is great. She’s had the run of play in Sapphires for the last couple of years. At the start, she was pretty set in her ways, in terms of what she could do, but it's about broadening her horizons about what’s out there at SSN levels, and she can do this one way this game and another next game, and she can change it up between quarters, so she’s like a sponge though.

"She’s just taking on everything, trying to add little things to her game each week, she’s so explosive and competitive and ball hungry, so I think it's just a great combination for us.

"Trying to get her to think a little bit more and think about her positioning as well as seeing the ball and knowing where her opposition are as well."

SWIFTS GET FIRST WIN OF THE SEASON OVER STILL-WINLESS MAGPIES

Fever coach Dan Ryan was particularly happy with the effort of Sasha Glasgow. Glasgow, in her 50th game of Suncorp Super Netball, played a full 60 minutes at goal attack for the first time in her career, and Ryan was impressed with how she ran out the game.

"She looked right at home in that position and her ability to turn and shoot and release some of that pressure off Jhaniele was exceptional," Ryan said.

"I really thought too the feeders as we got going through the game were making far better choices, when not to put the ball and when to put the ball.

"The biggest thing that I’ve been working on with Sash is her ability to ride the wave of challenges that come in a game. It’s never always easier and it’s never always hard and just to be able to adapt to what the defence is doing and switch back into what she does really well I think is really important.

"She had a bit of a shaky start on the shot in the first quarter but then just continued to back herself and go to the post in the next three which was brilliant. Probably more importantly she dug deep to just keep running and keep offering.

"For a player who spent the majority of her career as a goal shooter and really embraced the chance to star in that goal attack role for us, Ruby has been one of the in-form goal defenders in the first couple of rounds so it was a great challenge for Sash and really rose to the occasion."

Ryan explained the thinking behind injecting Verity Simmons and Chelsea Pitman into the game in the second half.

"I think both of them brought two very different strengths that we probably needed just to keep trying to stay ahead of the contest to find the extra gear.

"So to have that depth of talent and variety in our combinations today was hugely advantageous for us and I thought Vez [Simmons] and Chels [Pitman] slotted into the contest which was pretty high pressure for the entirety of the game, they slotted in really well and used their best attributes to keep that scoreboard ticking over for us.

The Fever will take on the Melbourne Vixens on Tuesday, while the Firebirds will turn their attention to the Giants.