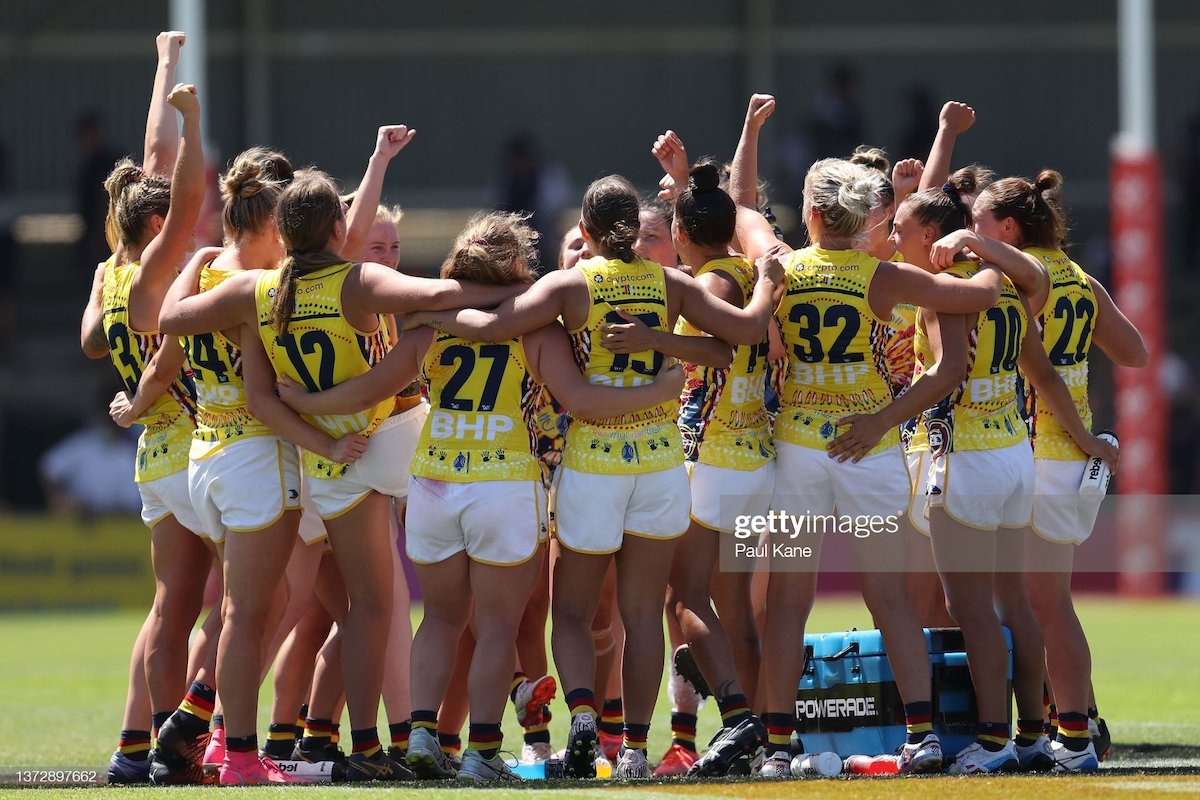 The Adelaide Crows took the premiership points in the top of the table clash against the Fremantle Dockers on Whadjuk country to open Round Eight.

The Adelaide Crows took the premiership points in the top of the table clash against the Fremantle Dockers on Whadjuk country to open Round Eight.

On Whadjuk country in Indigenous Round, the Adelaide Crows have run away with four premiership points in a hotly contested top of the table clash against the Fremantle Dockers, pleasing match-day skipper Sarah Allan.

The nine point win sees the Crows move to the outright lead on the ladder, which will almost certainly see them play finals in 2022.

Another inaccurate afternoon in front of goals - kicking seven behinds and missing at least two out on the full - will be on their minds though, as when it comes to finals accuracy could be the difference.

Speaking toEdge of the Crowdafter the win in the west, match-day skipper Sarah Allan was full of praise for her side and was really pleased with their ability to make the most of the opportunity and come away with the win.

"We definitely finished off how we wanted to in that last quarter and we couldn't be more happy to come over here and get the win," Allan said.

"I think we just started to play our game and really set up our shape from behind and like I said, played our game and our structures, and really put the foot down in the second half.

"And I think it's a credit to our fitness. We really pride ourselves on being one of the fittest teams and we showed that we can run out of game really well."

Fremantle last played 14 days ago in Melbourne and, from all reports, were given plenty of time off after a full-on first half of the season while based in Melbourne.

Meanwhile, Adelaide, travelling interstate for the second consecutive weekend, had all the momentum after its demolition job of the GWS Giants.

It was every bit the contested, heated opening term you'd expect when it's the top two teams matching up.

The warm conditions only made the end-to-end footy tougher, as neither team could make the most of their short forward 50 entries.

With less than five minutes to play in the first, Adelaide hit the scoreboard with the opening goal of the game.

Early in the second, Fremantle hit back with its first major for the afternoon. In her eighth AFLW game, Airlie Runnalls kicked her first goal, the 23 year old on the end of a strong centre clearance and forward 50 entry from Kara Antonio.

A short kick from Marinoff found Ponter on the lead, though this time her kick stayed out to the right for a behind.

The Crows' goal kicking woes continued from there, as the side wasted opportunities to apply scoreboard pressure.

In the third quarter alone, the Crows' had 10 consecutive inside 50s and dominated the term, but were only able to put five behinds on the board. Mixed with two shots going out on the full, it was a frustrating period of football to watch.

It took just one inside 50 for Fremantle to take the lead back. One patient passage of footy to switch the ball resulted in its first entry for the quarter and Hayley Millers' accuracy running into goal made Adelaide pay.

In the final term, Adelaide lowered its eyes, and pin-point passing saw Anne Hatchard find Eloise Jones, who hit up Ponter for her second for the day.

A goal was paid soon after to Ashleigh Woodland, though her disposal was a little questionable. A thumping kick to the square off the boot of Marijana Rajcic was almost dropped by Woodland, before she soccered through the goal.

ELOISE JONES: A CONSISTENT SEASON IN THE MAKING IS ALREADY EARNING ACCOLADES

Hannah Munyard went down with what appeared to be a painful ankle injury, however, she returned to the field for the second half.

Jones ended the game with ice on her lower leg, but Allan says both players will be assessed during the week.

"I'm not too sure [what happened]... they'll look through everything during the week with what's happened from the game."

Eight rounds in the Crows sit on top of the table, seven wins and one loss for the year - it's a position the club is really proud to be in, heading to the pointy end of the season, Allan explained.

"[Top spot is] definitely where we want to see ourselves. We pride ourselves on making the most of every game and we came here to get a win and that's what we did.

"So we really wanted to set ourselves up with another winner and we couldn't be prouder to be going home with that record.

"We'll quickly do our review on this game and then we'll quickly turn straight to the next game and it's going to be another hot contest.

"Every game sort of starts to feel like finals a bit, with the short season. So it's going to be a great contest and we're really looking forward to making the most of that game as well."

Adelaide returns to Norwood Oval next Sunday, where it will host the Collingwood Magpies at 2:40pm ACDT.