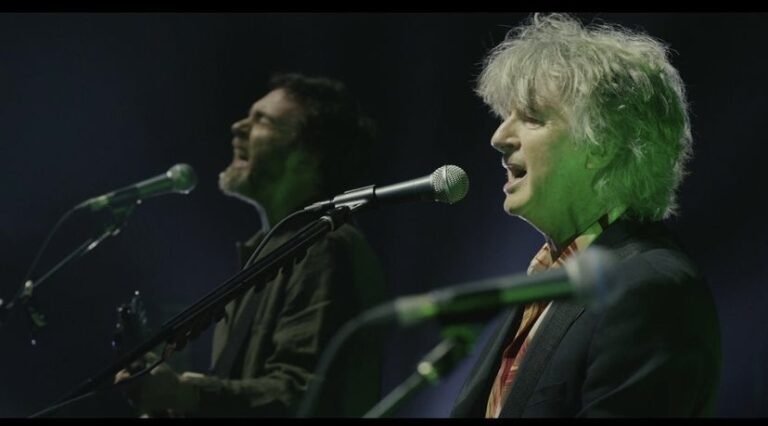 A packed crowd inside Sidney Myer Music Bowl was treated to two hours of perfection by Crowded House on Saturday Night.

The re-formed band was touring to promote their new albumDreamers Are Waiting.Led by Neil Finn, they sprinkled tracks recorded over the last two years amongst some of the most popular songs in the pop music canon.

They opened with the hits. The familiar guitar strings of Weather With Youfilled the appreciative arena as the lights went down. Mean To Me and Fall At Your Feet followed immediately after with no breaks between. With the audience firmly on side, Finn moved on to tracks from the well-received new catalogue.

Finn has an effortless demeanour on stage that contrasts delightfully with his stadium-perfect anthems and ballads. From the opening number, it is clear that he enjoys performing immensely. The concert moves quickly from one song to the next with brief but playful interludes where he reflected on a four-decade career.

Finn and Bassist Nick Seymour exchanged stories of coming second in talent quests and watching AC/DC from the trees behind the Music Bowl hill in the ’70s.

Neil’s son Liam joined in a clearly unrehearsed and goofily enjoyable rendition of the 60’s Batman theme in a gentle mockery of Melbourne’s founder. The onstage banter and crowd interaction segued seamlessly into the next number.

Finn is an excellent live performer and consummate touring musician. From his time with Split Enz to his recent inclusion in Fleetwood Mac he has delivered consistently.

At the mid-point of the night, the frontman had a polite request from his fans. They were appreciative of a gift of ANZAC biscuits but asked that in future that they not include marijuana.

"Or make it obvious that they are," quipped Liam Finn in response.

It was the type of easy and engaging stagecraft that makes a Crowded House gig unique. Come for the hits, enjoy the show.

Melbourne audiences last saw Finn in 2018 at a Melbourne Zoo twilight concert. On his return to the city, there were thousands more in the crowd but it still feels like an intimate experience.

When he directed the audience to sing the chorus to Don’t Dream It’s Over it was a near-religious experience for the dedicated fans. The lyrics echoed through the unique design of the Music Bowl, which made us all sound like better singers than we were.  Finn was typically encouraging.

The encore featured the band at their most playful and crowd-pleasing of the evening. After setting the bar high for the first 90 minutes, Crowded House eclipsed it with another string of instantly recognizable hits.

They returned to the stage with Something So Strong. With the crowd already euphoric, he turned it into a medley of Split Enz I Got You and excerpts from The Sound of Music and Les Miserables.

The concert ended almost exactly on two hours. It’s Only Natural was next followed by the perfect closing song.

Thanks so much for your time.

The crowd loudly sang along to Better Be Home Soon before Crowded House departed the stage. The audience was left thrilled and satisfied.  26 years ago, they said Goodbye To The World on the steps of the Sydney Opera House. Decades later, they remain a band performing at their peak.

Crowded House will continue their Australiantour throughout the yearbefore taking the show to Europe.