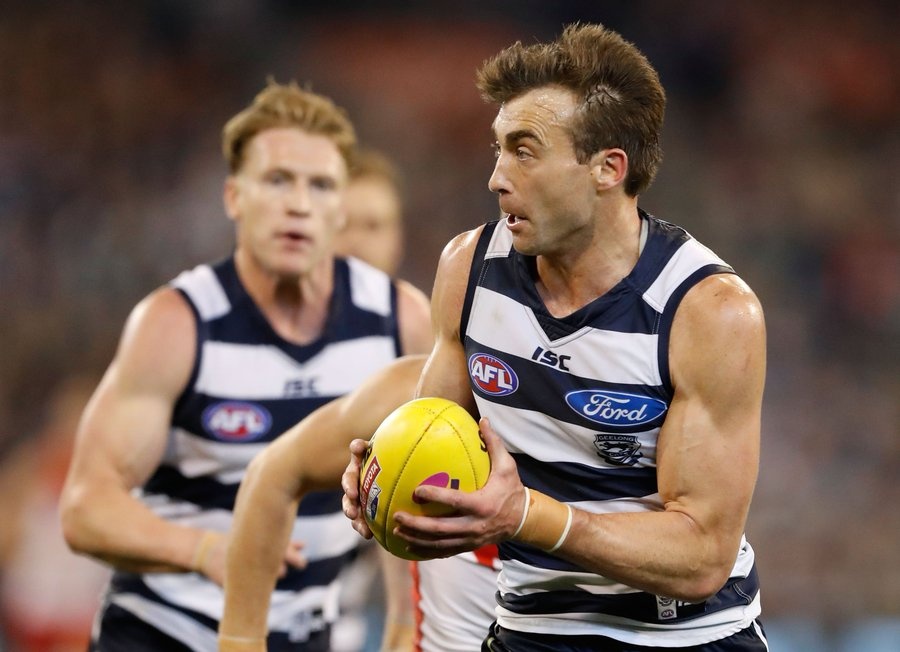 Corey Enright was always a favourite, now he's a Legend

Corey Enright has long been a legend among the Geelong fans. Last week, The Cats made it official.

Corey Enright was always a favourite, now he's a Legend

Corey Enright has long been a legend among the Geelong fans. Last week, The Cats made it official.

It will come as no surprise to Geelong fans that Corey Enright has been elevated to Legend status at the club. The three-time premiership player and six-time All-Australian was given the Cats’ highest honour on Friday night at GMHBA Stadium.

“Boris”, as he is affectionally known at Kardinia Park, was one of Geelong’s best players throughout their dominant years. The Cats were in premiership contention for most of his 332 games, winning in 2007, 2009 and 2011.

The popular half-back flanker was miserly in defence and creative with the ball.

Enright was a player that was not known for his lightning pace yet always had time on the field. His decisions making and discipline meant that he could play on the best opposition forward, yet his skills with the ball often meant that opposition coaches had to plan around him.

Geelong has had some successful high-profile recruits over the years. But there will be few draft bargains better than when Enright was chosen with pick 47 in 1999.

“His improvement was so rapid and enormous,” said former coach Mark Thompson to Fox Sports on the eve of Enright’s 300th game in 2016.

“Once he learnt how to do things, he just consistently went to a new level every week he played.

“He rarely played a bad game.

“He was really easy to coach. You’d tell him something and he’d do it straight away.

“He just accumulated the ball, was consistent, played to a high level every week and won best and fairest’s in premiership years, which is just outstanding.”

Both of Enright’s Carji Greeve’s medals came in 2009 and 2011. Years when The Cats also lifted the premiership cup. It is a feat that only matched by Kevin Bartlett, Jason Dunstall, Simon Black, Josh Gibson, Michael Voss and Gary Ablett Junior.

He was the best player in the best team in the club's greatest era.

He was the first player to break Ian Nankervis’s games record of 325 and ended his career as having played more games than any Cat before him. A record only broken by durable captain Joel Selwood.

A fan favourite in a remarkable era

Enright played in an era of stars, but even among names like Ablett, Matthew Scarlett and Paul Chapman, he was a fan favourite.

“I think the greatness did not actually strike us until way later than it should have,” the hosts of The Chaps Chat Cats podcast told The Edge of The Crowd.

“Enright performed all of the ordinary things at an extraordinary level.

“When you look at his performances at home or away, his form rarely faltered.

“He was just so unbelievably consistent.”

The hosts, made of up Jake, Sambo and Johnny, collectively refer to themselves as The Chaps, and have fond memories of Enright’s career.

Like most Geelong supporters, pinpointing a favourite highlight proved difficult.

“It’s sometimes hard to nail down an individual moment, because he always seemed more interested in the team than himself.

“His outside of the boot bender against the kangaroos in 2014 stands out as an exceptional display of his poise and skill.

“Along with Joel Corey, he was a player who, while not possessing ferocious speed, somehow always managed to find space to work in.

“His subtle navigation of congestion was elite.

“What better footballer could a team with dynastic ambitions ask for?”

Although he was the guest of honour, Enright was not the only player to receive accolades on the evening.

It was a nice moment for the pair of current stars. Their careers are uniquely intertwined.

Blicavs was rookie listed by The Cats after Guthrie’s father told Geelong recruiter Stephen Wells about a young steeple-chaser. The Olympic hopeful with AFL potential.

Both players have risen to become significant figures in Geelong’s recent history. They have achieved All Australian honours and been contributors in multiple positions. Guthrie starred against Melbourne in the top-of-the-table Round 17 clash.