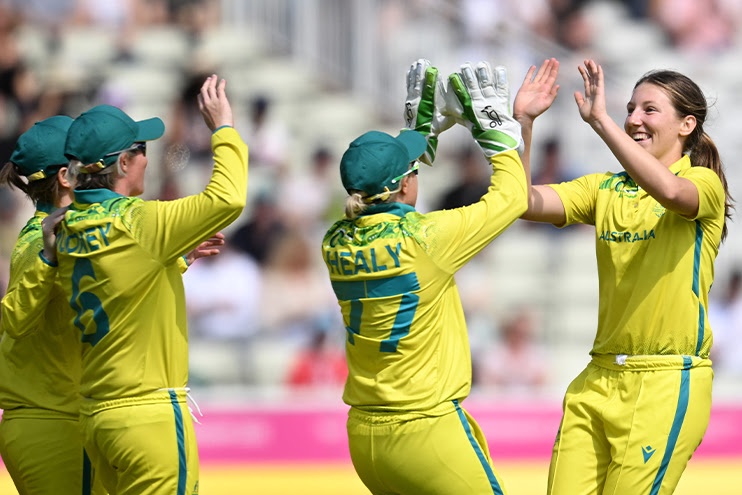 Four gold, six silver and seven bronze medals were won overnight, heading into the final third of the tournament for the dominant Aussies.

Four gold, six silver and seven bronze medals were won overnight, heading into the final third of the tournament for the dominant Aussies.

Through prolific performance in the pool alongside bowls, athletics and mountain biking success, the Aussie medal tally keeps piling up as the Commonwealth Games roll on through Day Six. Several finalists and semi-finalists also managed to qualify for their various events overnight.

Ariarne Titmus is one of Australia's most decorated swimmers at an international level, and last night added to her lengthy list of accolades by becoming the first person in over 50 years to win gold in the 200m, 400m and 800m freestyle, adding in the 400m freestyle gold medal last night. This capped off an incredible campaign in the pool for the Dolphins, winning an incredible 65 medals in the pool alone.

The purple patch in the pool has lead to almost limitless success with gold in the women's 4x100m Medley with the all star team of Kaylee McKeown, Chelsea Hodges, Emma McKeon and Mollie O’Callaghan.

In the 1500m Freestyle, Sam Short smashed his personal best to lead us to Australia's 25th gold in the pool. The Dolphins also claimed silver in the Men's 4x100m Medley, the team of Bradley Woodward, Zac Stubblety-Cook, Matt Temple and Kyle Chalmers just falling short of gold by only 0.08 seconds.

Ben Hance took silver in the 200m Freestyle S14 with Jack Ireland taking bronze in the same event. Mollie O'Callaghan and Kaylee McKeown claimed silver and bronze in the 50m backstroke. Finally, with a bronze medal in the Women's 400m Freestyle from Kiah Melverton, Australia's swimming campaign was capped off with nine more medals.

Athletics hits its stride with O'Hanlon gold and Starc silver

The Commonwealth games track and field meet has had no shortage of excitement on day six, with some Aussie medalists and finalists taking center stage. The 200th athletics gold medal historically at the Commonwealth games for Australia went to T37/T38 100m sprinter Evan O'Hanlon, setting a Commonwealth Games record for the event.

Elsewhere in the athletics front, Brandon Starc cleared 2.25 meters to claim silver in the men's high jump event. Peter Bol topped his heat to qualify for the finals in the 800m and heptathlete Taneille Crase landed personal bests in long jump (6.23m) and 800m (2:19:50) to finish fifth in the heptathlon.

In the 100m final, "The Flying Mullet" Rohan Browning ran 6th in the closely contested 100m final, recording an impressive time of 10.20s. Browning was the first Aussie to make the men’s 100m final since 2010. In the women's 10,000m, Isobel Batt-Doyle crossed the line in 8th position, an impressive effort in the final.

Bowling over the Competition

The Aussie Lawn Bowls campaign so far has been nothing short of dominant, with Aussies performing in multiple disciplines of the cult favourite sport. Oldest team member and history maker, Cheryl Lindfield has made a remarkable Commonwealth Games debut, winning the silver medal in the Para-pairs B6/B8 with partner Serena Bonnell. They led 2-1 after three ends before Scotland broke away to a 17-5 victory.

Earlier in the day, reigning champion Aaron Wilson won a closely fought contest 21-15 to top his group in the bid to defend his title. Women’s singles gold medallist Ellen Ryan and her teammate Kristina Krstic had great morning in the pairs with two wins - 21-15 in a bout with Wales and a 40-6 demolition of Canada, ensuring their place in the knockout stages of the competition.

Finally, the women’s triples team of Lynsey Clarke, Natasha Van Eldik and Rebecca Van Asch started the day with a 29-8 win over the Falkland Islands before a 17-12 loss to South Africa. And in the vision-impaired mixed pairs, Jake Fehlberg and Helen Boardman came from behind to beat South Africa.

Cuthbert climbs the mountain to medal

Commonwealth Games debutant Zoe Cuthbert managed a sensational effort as she took the silver in the women’s cross-country final (bike). In the men’s event Sam Fox finished sixth, ahead of Daniel McConnell in seventh place, who was competing in his third Commonwealth Games.

Scott has been documenting her journey on social media after her 2018 bronze and has made clear her intentions on winning the gold in her division. The 19 year-old Peters continues his impressive bid on the international stage as well.

In Judo, the Australian team managed to pick up three more bronze medals to make it 10 total medals for the team during the meet. Harry Cassar, Abigail Paduch and Liam Park won bronze in the men’s 90kg, women’s 78kg and men’s 100kg categories. These medals will go with another five bronze and the drought-breaking two golds for the Judo team.

The Aussie Hockeyroos are yet to concede a goal in Birmingham, defeating Scotland 2-0 in their fourth pool match. This came during the 100th international game of Hockeyroo mainstay Maddy Fitzpatrick.

Moving into the semi-final, they sit on top of the women’s pool B table. The Kookaburras also remain undefeated in the men’s tournament, with a 3-0 win over South Africa. They will face Pakistan in their final pool match tonight.

When it came to cricketing exploits, brilliant batting and stifling bowling brought Australia another win in the cricket, despite only scoring an alarming 2/22 in the powerplay. The Aussie surge was lead by an extraordinary 141-run partnership between Tahlia McGrath (78 off 51) and Beth Mooney (70 off 49).

McGrath continues her monumental rise in Australian cricket, also accomplishing impressive figures of 3-11 with the ball. Alana King chipped in with a very tidy 1-10 off three overs to cap off a 44 run win in the Aussie's clean sweep of the group stages.

Smashing it: Victories in racquet sports

Australia’s mixed doubles badminton teams of Tran Hoang Pham/Angela Yu and Lin Ying Xiang/Gronya Sommerville are both through to the round of 32 after prevailing over the Falkland Islands teams in two sets.

Women’s doubles teams have also progressed, with Angela Yu/Kaitlyn Ea defeating the Maldives and Wendy Chen/Gronya Sommerville beating Pakistan. And both Lin Ying Xiang and Nathan Tang will compete in the men’s singles in the round of 32. With all these qualifiers, the Aussies will be hoping to claim a medal or two in the badminton.

In squash, both pairings of Zac Alexander and Rachael Grinham and defending Commonwealth Games mixed doubles champions Donna Lobban and Cameron Pilley have progressed to the last 16.

Moving from the courts to the tables, Dillon Chambers and Finn Luu blasted through their round robin matches in the men's singles, storming into the knock-out stages.

Finally, in a tight two setter with an impressive Rwanda duo, Chris McHugh and Paul Burnett sealed the top spot on the Pool B table with a 21-16, 21-18 win.

The Aussies have had a strong start to the beach volleyball tournament, with both the top ranked Men’s pair and Women’s pair both starting strongly as they look towards the medal matches.