Colleen Hoover delivers gold again with Reminders of Him

Colleen Hoover has done it again with her latest release Reminders of Him an emotional rollercoaster that you just can't put down. 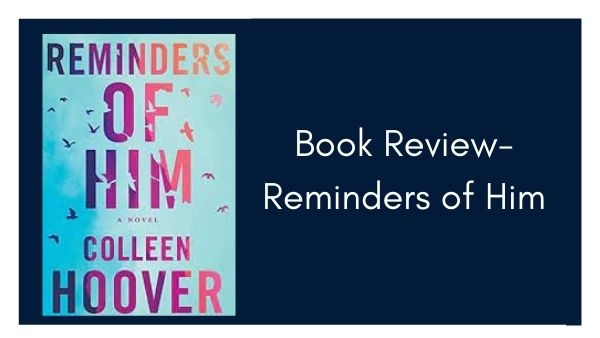 There aren't many authors that are an automatic buy but since picking up my first Colleen Hoover novel in December last year, there hasn't been one that I haven't enjoyed.(Spoilers Ahead)

The author of hit books like It Ends With Us, and Ugly love has done it again with her latest releaseReminders of Him

Reminders of Himonce again proved why she's such a brilliant author, with the way that she can captivate readers in the way her books are a can't put down type of book.

Reminders of Him follows the story of Kenna, who's just completed a five-year prison sentence over the death of her boyfriend Scotty.

When Kenna comes into town where things took a turn for the worst, there's one thing on her mind and that's getting to finally meet her daughter Diem, who she gave birth to while incarcerated.

Due to Diem being born six weeks earlier she was sent straight into the NICU which meant Kenna couldn't see her daughter before she was given to Scotty's Parents who'd been granted custody.

She quickly finds an ally in town, the local barman name Ledger Ward who's one of the few connections she has to her daughter.

When Kenna first entries the bar there’s something about her that captivates Ledger but neither of them knows at the time either of them is.

Once Kenna learns Ledger's name, she quickly discovers that she was the best friend of her late boyfriend, Scotty, although Kenna introduced herself as Nicole, so it wasn't until Kenna turned up looking for Diem that Ledger learnt who she was.

Colleen Hoover is able to shatter your heart into a million pieces early on in the book but can slowly put it back together, but it doesn’t come with heartache in between.

When Kenna goes to Scotty's parents’ house, who has full custody of Diem and when Ledger rips her away the pain felt real as readers could see how hard Kenna started to work to put her life back together. Even when Kenna reads the letter to Ledger that she wrote to Scotty about the night of the accident.

Although the book has the ability to shatter your heart into a million pieces Hoover does an exceptional job of slowly putting it back together as Kenna finally starts to get back on her feet by working two jobs, one at the local grocery store and one at Ledgers bar.

The character of Diem brought an element of relief to what could be a sad read at times with her big imagination like the time she thought that you bought babies in eggs at Walmart.

The character of Ledger was written brilliantly as he was put in an unimaginable situation having to almost choose between Kenna who Scotty’s parents still held responsible for the death of their son or Scotty’s parents Grace and Patrick who stepped up to take care of Diem with neither the pair not wanting Kenna in the picture.

As Ledger got to know Kenna more, the more he was torn as he knew that even if it looked like he was siding with Kenna and when he started to fall for her, if Grace and Patrick were to find out it would destroy his relationship with them which would make his relationship with Diem suffer.

The end of the book was heart-warming, with Grace and Patrick finally allowing Kenna to meet her daughter as Ledger convinces them to come around after showing them the letter Kenna wrote.

The moment that Kenna met Diem repaired the heartache that was caused by the events earlier in the book with the redemption arc of Kenna coming full circle as she meets Diem for the first time after almost five years.

Reminders of Him captivates you almost immediately and Hoover portrays the emotions of the characters perfectly, allowing the readers to almost feel first-hand what the characters are going through.

The way best way can tell how much I like a book is how much the book sucks you in with the story is, and this was up there with some of Hoover’s best work.

The book keeps you up late at night because you just don’t want to put it down and while the story itself was amazing, it’s also just the magic of Hoover.

Reminders of him is an instant hit and it shows that things aren’t always black and white no matter how clear they seem. The book is easily among Hoovers best with the book an emotional rollercoaster that leaves you with a full heart.