Chris Ryan Can't Complain and neither will Adelaide Fringe audiences

Award winning comedian, Chris Ryan is making her full debut at @ADLfringe with Can't Complain. She talks to us about what goes into making her hit stand up show. 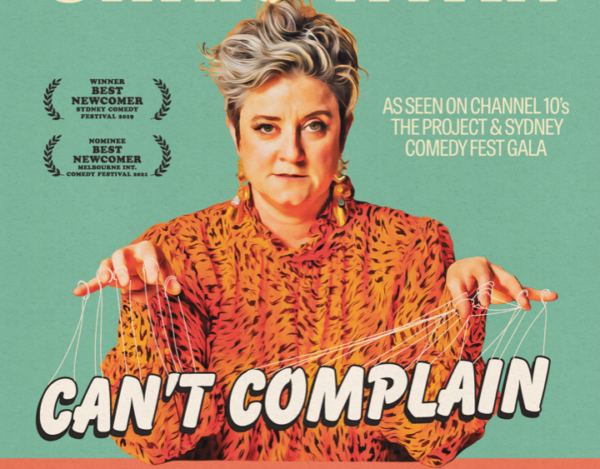 Chris Ryan is out of lockdown and back on the stage with her new showCan’t Complain.The 2019 Best Newcomer winner at the Sydney Comedy Festival will make her full solo debut at the Adelaide Fringe. She experienced a taste of the festival last year and is ready to deliver a full hour of laughs.

“I always wanted to do Adelaide but I needed to get some runs on the board first,” Ryan toldThe Edge Of The Crowd.

“I did some late-night spots at Fringe last year like Phat Cave, in Gluttony and Rhino Room and the whole festival was like nothing I’ve ever seen, and I just wanted to be part of it.”

Ryan has an engaging, and almost effortless style. She makes it look easy, even when describing something like her slightly self serving definition of “charity.”

However, like all good comedians she is constantly working on material and improving the show. It is an endless process and constant work in progress.

“The journey hasn’t started yet really,” she says.Can't Complainis a constant work in progress

“I’m still writing parts of the show. As for many comedians, Adelaide will be the baptism of fire to kickstart the show’s season.

“I expect the show will change quite a lot before I get there and during the two-week run at Rhino Room.”

Ryan started performing in 2012 by entering the RAW Comedy competition. The annual talent search for the next stand up star.

“After years in the wilderness (the suburbs) as a new Mum I longed to get on stage and have some laughs,” is how she describes her origin story.

Ryan lists, Judith Lucy, Geraldine Hickey, Kitty Flanagan and Becky Lucas among her influences. Fiona O’Loughlin and Maria Bamford are other acts that she admires. Although it is the art of comedy itself that she has the highest praise for.

“I think comedy can make a bad night good or take your crummy experiences and make them bearable. Which is more than most jobs can do.

“I’m just writing and performing like any other comedian.

“When gigs were shut down I took to making animations of chats with my Mum and doing online gigs.”

Those animations can be found on her YouTube channel and are delightfully animated depictions of their conversations. The chats span a wide range of topics from Chris’ ill-conceived bike trip around New Zealand to the issues of the lack of toilets on golf courses.

While that bike trek only brought tears and pain, her stand up career has brought acclaim. Adelaide will be the third major festival of her career that involves regular gigs and an appearance on The Project.

After being recognised by the Sydney Festival, Ryan was nominated as the Best Newcomer, this time at the Melbourne Comedy Festival in 2021.

“You spend a lot of time telling yourself it doesn’t matter just so you don’t get too competitive or start worrying about if you’re good enough [you never are.]

“But it was a huge thrill and gave me a bit of confidence that I otherwise would have had to try and fabricate in my head.

“Awards are amazing but you will only have a career if you keep writing and performing better each year. You’re really only as good as your last gig.”

The blurb forCan’t Complainstates that she “lives most of her life with the stance of an inmate that’s about the be shanked.”

Ryan explains that is a way of saying that she is an anxious person.

“Although at the time you think that by worrying about everything, you’re able to have some control over life. But of course, you don’t.

“I know 99 per cent of the things I worry about never happen, but maybe that’s because the one per cent I don't worry about, happen all of the time.

“By sharing my most ridiculous thoughts, fears and judgements I feel better and other people feel less mad, themselves. It’s a win-win.”

In a win for audiences who love an unusual outlook and hilarious delivery, Ryan will take to the stage six nights a week.

It is the opportunity for Adelaide’s comedy fans to see one of Australia’s funniest new comedians.