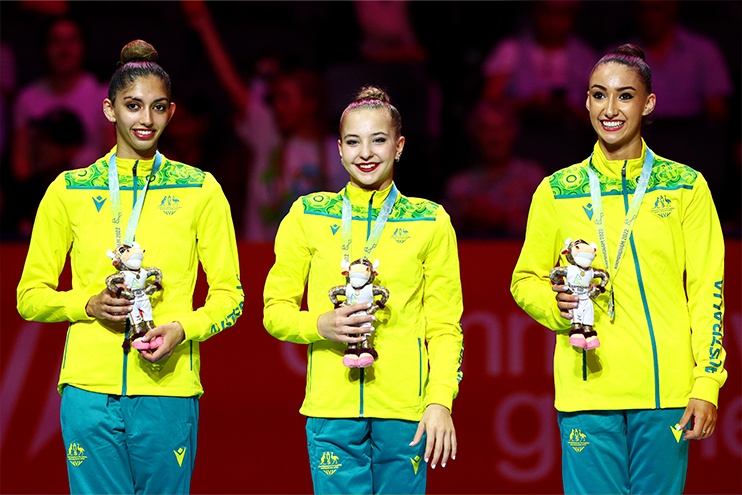 Another day, another haul of medals for Australia's Commonwealth Games team. On Day Seven of the Games in Birmingham, Australia secured themselves a further nine medals to bring their tally to 132.

Another day, another haul of medals for Australia's Commonwealth Games team. On Day Seven of the Games in Birmingham, Australia secured themselves a further nine medals to bring their tally to 132.

For the Games so far, Australia has now won 132 medals, with four golds, four silvers, and a bronze added to the Australian medal swag on Day 7

Grace Brown and Rohan Dennis double up against the clock

The Aussies started the Road Racing events as they mean to finish winning gold in the time trials in both the men's and women's events.

Grace Brown started as the favourite and disappointed nobody, despite a slight wobble on the start line. The Aussies started the Road Racing events as they mean to finish winning gold in the time trials in both the men's and women's events.

Kiwi Georgia Williams claimed the bronze. A slight foot slip at the start didn't stop the Aussie, who had just completed the Tour de France Femmes just a couple of days earlier.

Life's a beach in the volleyball group stages

Women's volleyball duo Mariafe Artacho del Solar and Taliqua Clancy bulldozed their way through their Cypriot opponents to complete their group stage fixtures and qualify for the quarter-finals.

Defying swirling winds at the demolished marketplace that is the setting for the Beach Volleyball at this year's games, the Aussies romped to a 21-14,21-13 over their opponents.

After a silver medal showing in both the Gold Coast and Tokyo, the duo is hoping to go one better in Birmingham.

Gloves on in the Boxing

South Australian heavyweight Eddie Coumi is guaranteed a medal after winning his quarter-final against Anguilla's Japheth Olton. Incredibly the fight almost didn't happen after the Caribean boxer was nearly disqualified for wearing the wrong colour gumshield.

The fight went ahead and Coumi made light work of his opponent to earn his spot amongst the medals. He told reporters afterwards that he would have had a hard time had he made it to the medals via a forfeit from his opponent. 'I wouldn't have accepted it [a medal]' he said when asked how he would have felt about winning a medal without throwing a punch.

Aussie Tina Rahimi was another of the Aussies to succeed, as five Australian boxers have booked a spot in the semi finals.

It is no surprise the duo both made the 1.81m jump at the first time of asking. Eleanor Patterson was recently crowned world champion, and Nicola Olyslagers was the silver medalist at the Olympics last year.

Across the field, Matt Denny finally won a medal at a major event, taking out the gold medal in the Men's Discus, with back to back personal best launches to take home the gold medal.

And in a repeat of the Tokyo 2020 Olympics, and returning the favour from the night before, his roommate, Brandon Starc was in the crowd to support him.

The Commonwealth Games occasionally throws up an interesting battle. This one takes the cake in terms of the storylines at play.

In the mixed doubles Australian duo Donna Lobban and Cameron Pilley are the reigning Commonwealth Games champions. A victory over the Indian duo Joshana Chinappa and Harinder Pal Singh Sandu in straight sets in the Round of 16 kept them in the hunt to defend their title.

This is where the story gets interesting. The Aussie pair will face Scottish duo, Lisa Aitken and Greg Lobban. Greg Lobban is Donna Lobbans Scottish-born husband!

The husband and wife will clash in the quarterfinals. The winner gets to continue their hunt for a CWG medal, the loser forced to watch from the stands (or whatever else the couple might have on the line).

The Australian Diamonds faced their first major challenge of the Commonwealth Games, coming up against Jamaica. It's fair to say they failed that challenge, as they went down by two goals to the Sunshine Girls.

The five Jamaican players who play in the Suncorp Super Netball, the Australian domestic league wreaked havoc on the Australian plans. Jhaniele Fowler was particularly dominant for the Jamaicans, as the defensive duo of Courtney Bruce and Jo Weston were unable to slow her scoring.

Things were going according to the familiar script of Australian domination at the end of the third quarter, but Jamiaca staged an incredible comeback to secure a 57-55 victory that shocked a rowdy NEC Arena crowd.

Madison De Rozario backed up from winning Commonwealth Games gold in the T53/54 Marathon. Her chair was zip tied together after some heavy handed airline workers damaged it, but that didn't slow her down.

It didn't affect her T53/54 1500m performance either, as she took home the gold medal in that race, ahead of teammate Angela Ballard. The result means that De Rozario is now the first Australian para-athlete to win four CWG gold medals.

De Rozario explained she was hoping to sit back and make her charge for the gold late. It didn't turn out that way. A slow pace meant she had to go for broke. The tactic worked and Madison is now one of our most decorated para-athletes in CWG history.

The men's decathlon is primed for a blockbuster finish at this years Commonwealth Games. And in news that shocks few, there is an Australian right amongst it.

After five events, Cedric Dubler is in the thick of the competition, after strong performances in the long jump (second in the group), 100m (second) and 400m (second). Dubler heads into the final day of the Decathlon in second place with 4242 points. He is expected to be right amongst it when the medals are handed out tomorrow.

Fellow Australians Ash Diamond and Daniel Golubovic are also in the mix, in fourth and fifth respectively.

Rhythmic Gymnasts kick off their campaign with a medal

On the first night of Rhythmic Gymnastics, the Australian team took home silver, as the trio of Lidiia Iakovleva, Alexandra Kiroi-Bogatyreva and Ashari Gill scored 268.650.

The trio were just behind Canada, and going into the final act, with Gill's ribbon routine, where she scored 25.200, as Australia locked in silver, one better than the bronze medal from the Gold Coast

Kiroi-Bogatyreva was the star of the show for the Australians, as the lone survivor from the Gold Coast. She was the top scorer with the ball, and second best in clubs on her way to qualifying for the individual all-around final.