Animation writer Janis Robertson talks to the Edge of the Crowd about the @TAGwriters fight for pay equality in film and television. 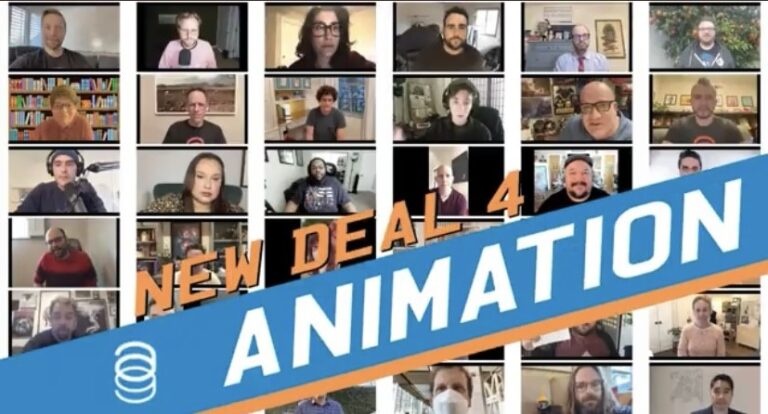 Animated television shows and movies are among the most beloved and iconic forms of visual entertainment worldwide.  However, animation writers receive less than half the pay of live-action writers despite doing the exact same work.  The Animation Guild [TAG] is currently negotiating to win animators the same rights as others in the industry.

“The same blood sweat and tears goes into any script,”  Bill Wolkoff, the executive producer of Netflix’s Kipo andThe Age Of The Wonderbeastssaid in a video posted online.

“No matter the union covering it, the process is the same.

“Writers are writers, and what does The Animation Guild deserve? Pay equity.”

Currently, working on an animated project earns the writers a minimum of $2064 per week under the TAG.  A live-action writer under the Writers Guild of America [WAG] can expect a minimum as high as $5185 per week.

The difference works out to Animation writers earning 41 to 52 cents per dollar paid to writers in live-action.

Why is this the case?

“It's a complicated and historical thing,” says writer Janis Robertson to The Edge of The Crowd.

“From what I understand, the typical excuse is that animation doesn't pull in as much of an audience, and doesn't make as much revenue.

“Also, in the US the majority of the animation is still children's programming, which is seen as less profitable as well.

“Although you just have to stroll down any toy aisle and you can see why this is a false argument.

“I'm sure there are lots more reasons the studios can come up with to pay us less but basically it comes down to the studios wanting to squeeze every last possible dime out of their productions.

“The potentialIATSE strikelast November really highlighted this on the live-action side.”

Robertson has a long history in film and television both in visual effects with Industrial Light and Magic and recently as a writer onLove, Death + Robots. She says that there is a lack of knowledge about the issue, even within the industry.

“The main drive behind our #PayAnimationWriters campaign is to support negotiations, but it is also to educate the industry.

“I talk to live-action writers all the time who have no idea we belong to a different union, much less than our minimums are about half of the WGA.

“It was especially frustrating that, as [Live film] sets shut down in 2020, many writers had the bright idea to switch to animation without recognizing that animation writing requires a different skill set.

“It's not to say people can't switch back and forth, they can! But you do have to think a little differently when telling a story in the animated medium and some acknowledgement of that would be nice.

“Animation writers also tend to be pigeon-holed, so it's easier for live-action writers to move to animation but not the other way around -- which feels very unfair when you're watching a Marvel movie or show and thinking about it's basically an animated story.”

“Why would they pay more when they can pay less?”

Historically, some programs have been able to leverage prime time viewership to be paid the WGA rate. This is rare, it is not something studios will offer or encourage.

“The basic reason studios don't want writers rooms to go WGA is because they will have to pay those writers more money,” explains Robertson.

“Why would they pay more when they can pay less?”

Another difference between TAG and WGA writers is residuals. For a live-action show, the writer is entitled to a payment when the work is re-used.

When Disney re-made The Lion King in 2019.The writer of the original 1994 script went public,saying he was not paid for the remake despite being credited for the original story.

“Say you’re writing for CSI: Miami, and you create a new coroner character, and that character becomes a fan favourite, so they decide that they’re going to spin off that character,”

“You get credit for creating that character, and you will be paid as such.

In animation, where we create characters for these shows all the time, we don’t get anything. The studio owns it because all of our contracts are effectively work for hire.”

Robertson describes a complex situation around the residual payment.  It does exist, however they do not go directly to the writers as they would under the WGA. Instead, they fund the TAG pension and healthcare.

“If you can’t pay your bills, you’ll have to find other work”

The solution is not to combine the two guilds. This is because the TGA covers all aspects of animation while the WGA is concerned with writers.

There is the potential for the WGA to absorb the writers in The Animation Guild.

“There is a myriad of reasons for and against this idea,” explains Robertson.

“I'm still learning all the pros and cons myself.

“Unions are prohibited from poaching members by US federal labour law so the WGA can't make an active push to convert members.

“But there have been some recent examples of writer's rooms threatening work stoppages in order to switch unions, like onSolar Opposites.”

Belonging to both unions is possible, but far from ideal. Robertson paints a picture of a situation where you could be financially worse off.

“It means you get to pay both sets of initiation fees and membership dues.

“And you still have to make enough hours in each guild to keep your healthcare.

“So you could potentially be working full time as a writer, belong to two unions, and still have to pay out of pocket for healthcare.”

The simplest solution is for studios to agree to the TAG request to receive the same pay as they would on a live-action production. The guild remains confident that a deal will be struck and have not ruled out industrial action.

Robertson fears that the current system will eventually prevent writers from working in animation.

“If you can't pay your bills, you have to find other work, unless you have a financial support system.

“This creates a whole other issue of who has the ability to make it in this industry.

“This is also an industry-wide issue, not just animation.”

As the negotiations continue, TAG is spreading awareness and the campaign is getting more and more attention daily. Oscar-winning director Guillermo del Toro recently pledged his support in solidarity with the guild.

It is something that encourages the TAG, it is essential that as many people as possible are made aware of the issue. When her career as a writer first began, Robertson knew the pay was lower but did not realise the scale of the disparity either.

“I'd be totally speculating on who knows and cares, who knows it but profits on it, and who is completely unaware.

“But yes, I wish anyone in entertainment with a lot of pull would advocate on the side of all animation workers.”

Animation is a long time passion of Robertson’s. She was inspired early byBatman: The Animated Series, and more recently byArcane.

“Arcane was pretty amazing,” she says.

“I hope it's going to help widen the door to get more sophisticated adult genre animation made.

“Other countries have been doing it for decades and we're still catching up in the US.”

For artists like Robertson, writing on an animated show is creatively rewarding.

“The most rewarding and challenging projects tend to be the original work I've written.

“It's definitely a huge challenge to get anything made but there's nothing like a finished script with your name under ‘Written By.’"

It is now down to the studios to make it financially rewarding for the TAG. Otherwise, our favourite cartoons will have no words, no stories and no future.