Amna Bee has put her life experiences to hilarious effect. Now she is bringing her acclaimed show Don't Tell My Family to the Adelaide Fringe. 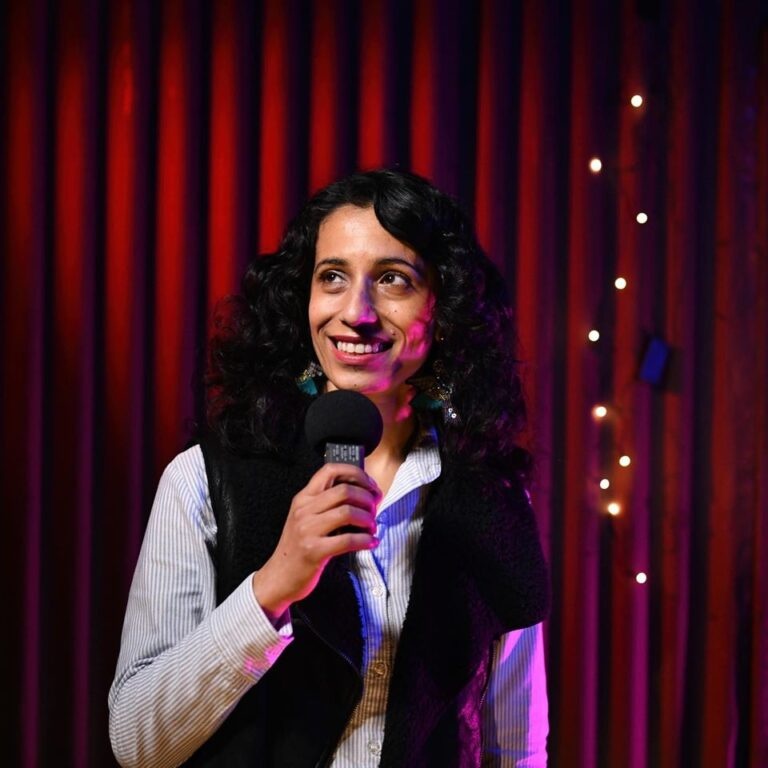 Her life has taken her from Pakistan to Toronto and Australia, and her comedy career has seen her perform across the country. Now Amnda Bee is taking her comic talents to The Adelaide Fringe Festival.

Her ShowDon’t Tell My Familyreceived rave reviews and sold-out sessions at the 2021 Melbourne Comedy Festival. The rising comedian is looking forward to performing it for Adelaide.

“I’ve a personal relationship with Adelaide,” Bee toldThe Edge Of The Crowd.

“I’ve spent some time there in between moving from one place to another. It was also the most exciting place for me when I was living in Alice Springs.

“Adelaide Fringe is a fantastic festival and I love how the city comes alive.

“The range and quality of shows is unbelievably good and the festival is very well organised and supportive of artists.

Bee’s show takes the audience through her life’s journey so far. As the child of a conservative family in Pakistan and how she has, in her own words, “grown-up to defy every single expectation placed upon her.”

To Australian’s, “conservative” can mean anything from calling talkback radio to enjoying the prime minister's cooking. In the context of Bee’s upbringing, it has a very different meaning.

“A conservative Pakistani family means abiding by tradition and religious norms, in this case being a Muslim family.

“You’re expected to be modest in your clothing and activities.

“Dating is a no-no (people do it, just don’t admit to it). Men and women don’t casually hang out with one another.

“Women are generally expected to get married to a suitable man (preferably chosen by her parents) and have a traditional life.

“Performing arts is not valued or respected, especially not for women.”

Bee’s show promises to offer a hilarious tale of crossing borders, taboos and expectations. It may be a unique perspective, but audiences have found her story relatable.

“I’ve always written about my life experiences (funny articles etc). When I first started standup, a bunch of people told me they found that point of view interesting.

“I thought maybe I should keep going with this since there seems to be an audience for this.”

For comedian’s like Amna Bee, the process of laying out their life story to the mercy of a smiling crowd can be a double-edged sword. It has been a rewarding experience nonetheless.

Writing about things they have noticed out in the world is one thing, combining that with your own personal high’s and lows can be a very different experience.

“I think doing comedy has highlighted my anxieties and fears! And yes it has also been therapeutic in some ways as well.

“Writing and performing standup comedy has been an enormous learning and personal growth experience.

“I’ve had to confront a range of issues in a short span of time which means I’ve had to learn to process it as it has come up.”

Her style is cheeky, reflective and hilarious. She brings a perspective that was previously unheard on an Australian stage, no matter how dark the subject matter, there is always a laugh in it.

The title is accurate, she talks about things she would not want her family to hear.

“They’re aware I do standup comedy,” she says when asked if they have seen it.

“They’re just not sure why.”

When in Melbourne, Amna Bee is busy running a popular comedy room, Raise The Bar.

It is a dedicated space for women and non-binary performers. It was established with fellow comic Sam Serner.

A comedy room can be an uneasy place for audiences at times, and occasionally for the wrong reasons. There is always the possibility of somebody trying to punch down to shock or show they have an edge.

The existence of a venue like Raise The Bar means that not only will they likely not be the butt of a joke, they can enjoy the night without worrying they might be.

“I was like, we’re the comedy central of Australia, why doesn’t a room like that already exist?

“I wanted a space where the focus is not just on giving women and Non-Binary comics a space, but also have high-quality shows.

“So far the response has been excellent. Our shows are funny, smart and leave you wanting more."

Don’t Tell My Familypromises to be unlike any other stand up comedy on offer at the Fringe. It is a story of marriage, divorce, political activism and culture clash. Amna Bee’s perspective and delivery make her a unique entertainer and one not to be missed at the Adelaide Fringe.