What happens when a group of teens are wrecked in the mountains for nineteen months? Find out in the new series Yellowjackets. 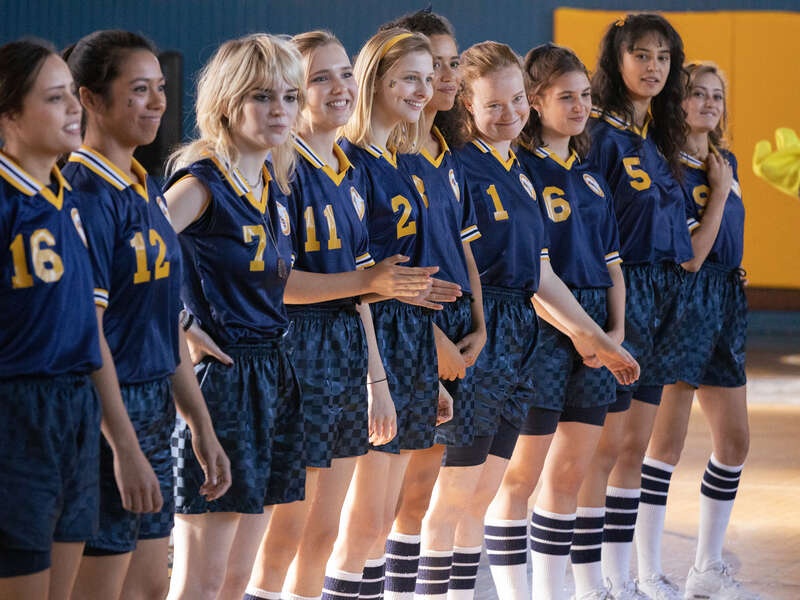 In the new female-lead show, viewers watch a group of teens trauma bond during their one-and-a-half years in the North American wilderness.

Soccer state champions the Yellowjackets are flying to Seattle for their next big game but they don’t make it. After nineteen months, several of the initial survivors are found, with the mystery surrounding their time in the mountains. To survive the long winters in the Rockies was no easy feat, and cannibalism seems the only possible solution.

Twenty-five years on, viewers are introduced to the middle-aged Yellowjackets that still remain. Despite appearing to live stable lives, the past still haunts them, both internally and externally. Throughout the episodes, we switch between the girls’ time in the mountains (1996) and 2021.

The Showtime psychological drama first aired in November 2021 and is available on Paramount Plus in Australia. With its high reviews, it's no surprise thatYellowjacketshas been renewed for a second season as of December 2021.

This article contains spoilers for Episodes One and Two of Yellowjackets.

The opening sets the show off with a bang. We see an unrecognisable girl running through snow-covered woods, shortly meeting her demise by falling into a pit filled with pointed sticks. As the girl lies there, we are shown a gold heart necklace, the only identifier of the victim.

We then switch to the “current day” in the timeline, twenty-five years later, in 2021. A journalist, Jessica, is introduced, shown interviewing a coach, principal and former math teacher. Apparently, none of the girls were much good at trigonometry.

We get a glimpse of her home. It seems normal, just your average middle-class American household in 2021. It’s worth noting that theYellowjacketsuniverse has no mention of COVID-19. Whilst filming started in late 2019, production was shut down and restarted again in mid-2021.

Whilst inspecting her rabbit munched vegetable garden, Shauna and Jessica met for the first time. Despite her hesitancy, Shauna decides to let Jessica inside, where she is offered a seven-figure book deal. A large collection of ceramic rabbits is shown – we later come to find out this collection doesn’t mean Shauna has a fondness for rabbits.

Throughout the first episode, several of the Yellowjackets team members are introduced. Best friends Jackie and Shauna – who plan to share a room at Rutgers University, Taissa “Ty” Turner who is running for state senator, punky Natalie who is in rehab and Misty, the coach’s assistant turned residential care worker.

Cannibalism is confirmed after being heavily implied – how else would they survive nineteen months in snowcapped mountains? Even before the girls’ crash, we are shown some of the things they are capable of. Ty causes the team freshman’s bone to burst through her skin during a scrimmage gone wrong, Misty watches a rat fight for its life in her pool and Shauna hooks up with Jackie’s boyfriend (not for the first time, either).

Episode One ends as a Valium-drugged Shauna wakes up as their plane is going down. Based on the pilot's announcement from earlier in the episode, it seems the plane’s course did not avoid the storm system completely.

What we know at the end of Episode One

We’re at the scene of the crash, in 1996. Our first victim is a girl impaled with a piece of metal in her seat. Another girl is in flames at the back of a plane. Several of the other Yellowjackets are attempting to exit the plane, but the hatch is proving difficult to open. After a group effort, the girls manage to open the hatch and escape.

Van is stuck between two seats and Shauna attempts to free her. Panicked, Jackie pulls Shauna outside as the flames grow. After an explosion occurs, the girls assume Van is dead. Despite the death of the pilot and some teammates, there seem to be a decent amount of people alive. In addition to the girls who we see as adults, we know that Lottie, Laura Lee, “JV”, Mari and Jackie all make it out. Miraculously, Vanessa has also managed to free herself. She's not forgiving Jackie anytime soon.

The Assistant Coach, Ben Scott, is one survivor that is immediately fighting for his life. In the crash, a large piece of the plane is crushing his leg. After the group has successfully removed the wreckage, Misty decides to amputate Ben’s severely damaged leg. She immediately puts the skills learned in her Red Cross Babysitter’s Class to use, giving first aid to those injured.

Two other survivors are introduced, the Martinez brothers who joined their father on the trip. Unfortunately for them, their father is not so lucky. After being sucked out of the falling plane, his body is found in a tree by Laura Lee.

THE TWILIGHT OF ADAM: WHAT WE KNOW ABOUT THE WILDS’ NEW CAST

In 2021, Jeff and Shauna are in marriage counselling, leading to some furniture store customer roleplay in an attempt to rekindle their relationship. Whilst on a date, we learn about adult Misty’s turn-ons that include escalators, knuckles and steamed clams. Following her date, Misty returns home to an armed Natalie, who suspects that she’s the sender of a mysterious postcard.

This postcard, has a cryptic symbol on the back, something recognisable to both Misty and Natalie. Later in the episode, we find out that this symbol was not their invention, but something that already existed in the woods when they crashed.

Ty is having some issues at home too, introduced by a small argument between herself and her wife after missing her son’s parent-teacher interview. Some mystery starts to surround her son, Sammy, who is apparently having trouble making friends. Later in the episode, he tells Ty that a woman has been watching him outside his window at night. To make the situation eerier, he has stuck drawings of monsters and dark beings on his window to scare her away. Creepy.

The episode ends with a shocking move from Misty. During the night, whilst relieving herself, she overhears some of the girls talking about how lucky they are to have Misty around. For someone who is so desperate to be wanted and liked, Misty is euphoric.

Mere seconds after hearing wonderful things about her, Misty find the plane's emergency transmitter. After a few brief seconds, she decides to destroy it. Finding the girls in this remote location has now become increasingly more difficult. Her actions have essentially doomed the group to nineteen months in the wilderness.

What we know at the end of Episode Two