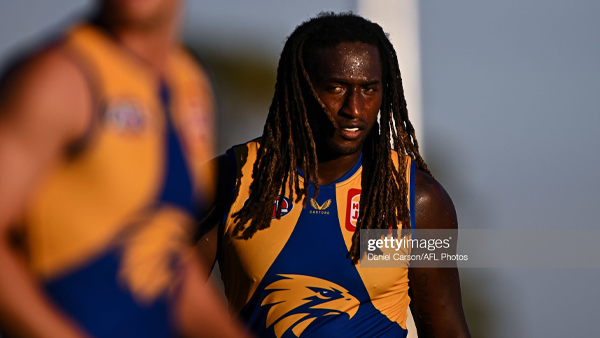 'Write us off if you please' Naitanui declares

West Coast Eagles ruck Nic Naitanui says that despite the growing list of players out via injury or health and safety protocols, the club can cover the loss, with younger players ready to take the next step.

'Write us off if you please' Naitanui declares

West Coast Eagles ruck Nic Naitanui says that despite the growing list of players out via injury or health and safety protocols, the club can cover the loss, with younger players ready to take the next step.

West Coast Eagles ruck Nic Naitanui has expressed that the building pre-season concerns at the club won't play into its preparations for the season as Round One nears.

West Coast has experienced a growing number of injuries, players being placed in the AFL's health and safety protocols, and inactive players, all to key players throughout the pre-season. The side suffered a97-point loss to cross-town rivals Fremantle in a practice gameon the weekend as the club continued to feel the brunt of the reducing list of available players.

Nevertheless, the Eagles' number one ruck, Naitanui believes that the club has to face the reality of the situation it finds itself in, understanding that the mounting effects can come at any point, but that the club is prepared to respond to any challenge.

"The current reality is that we do have a lot of injuries. It's something that I know I've never seen throughout my career here at the club," Naitanui told media on Tuesday.

"I think the calibre of people that are out too [is huge], but that's the nature of football clubs, you have events that affect you throughout the year. We've had things like COVID, we've had things like the travel, and having injuries is just another part that comes with it as well.

"We've faced this before. Maybe not to this extent but the next soldier steps up, now we're blooding a lot more youth who'll get a few more games, especially the early parts of the year and fingers crossed we get a lot of those boys back across the course of the year."

The prospect of being able to blood more youth or fringe players has Naitanui excited for the exposure these players may get, no matter the situation relating to their selection and that others will need to step up, confirming their capabilities on the big stage.

"I think our young guys have been waiting a fair while, we've played a lot of older players for a long time now and some of the youth have probably been unable to play because of that or have limited game time," Naitantui said.

"This will be good exposure for them coming through and I guess, with playing some of those guys, it builds experience, it builds excitement but also, mistakes come with that as well. We get good learnings from that... about where we need to get to and how we need to get better before the season commences."

Touching on some of the individual younger players within the squad, Naitanui was quick to highlight the work of West Coast's first two draft selections, Campbell Chesser and Brady Hough, plus Hugh Dixon who's vying for a spot on the rookie list.

"Hoffy's (Brady Hough) been really good, along with Chesser, those two have probably been the standouts out of the younger players," Naitanui said.

"Hoffy's come a long way, he's a quiet achiever, he wants to work hard, he knuckles down back and just plays his role so he's the one guy, I think I've been saying that for weeks now that I'm really excited to see play some football.

"Hugh's put his best foot forward - especially on Friday night against his old mob - to get signed up as an SSP and [it's] really exciting. [I] didn't really see too much of him before he came to West Coast but to see him up close and personal and see what he did at training but also on game day, I'm pretty excited to see how far that goes and fingers crossed we add him to our list cause he's gonna be a valuable player."

With backup ruck Oscar Allen out of action in the early stages of the season with a foot injury, it also leaves the position for his replacement wide open, to ruck alongside Naitanui, including Bailey Williams, Callum Jamieson, and potential SSP selection, Luke Strnadica, all impressing.

"Bailey's had a really good pre-season, and I'm really excited to see him come about now, he's stepped into that role and really embraced it and Jamo's (Callum Jamieson) another one, he's come off [an] injury and he's working his way back as well," Naitanui explained.

"We've got Luke Strnadica as well who's [got] potential to join us as well, he's another ruckman from the East Fremantle ranks and spent some time at the Dockers. We've got a lot of ruck stocks that can help out, but I think we're going to be fine in terms of our tall department with Oscar being out for a period of time."

With the growing list of players who are missing at the club for a number of different reasons and the heavy loss to Fremantle, Naitanui understood the external noise being generated about West Coast's expected performance this season.

"I think it's understandable when you have a massive loss like that in a pre-season game, albeit there were no points up for grabs, people were entitled to have their opinion," Naitanui said.

"Everyone has their bets and their tips and whatnot for what they think might eventuate throughout the season and everyone's entitled to have that as well, it's what makes football a beautiful thing. It happens every year, people tip teams to be top four or bottom four, to win a Grand Final, and that's all part of the fun of football.

"Write us off if you please, but I know internally we're all excited, we're all ready to go and we're excited to prove some of those people wrong. I know we're working pretty hard on things, and yeah it wasn't the best result last Friday but it's all learning, we get another chance this Sunday and then the following week before Round One actually kicks off."