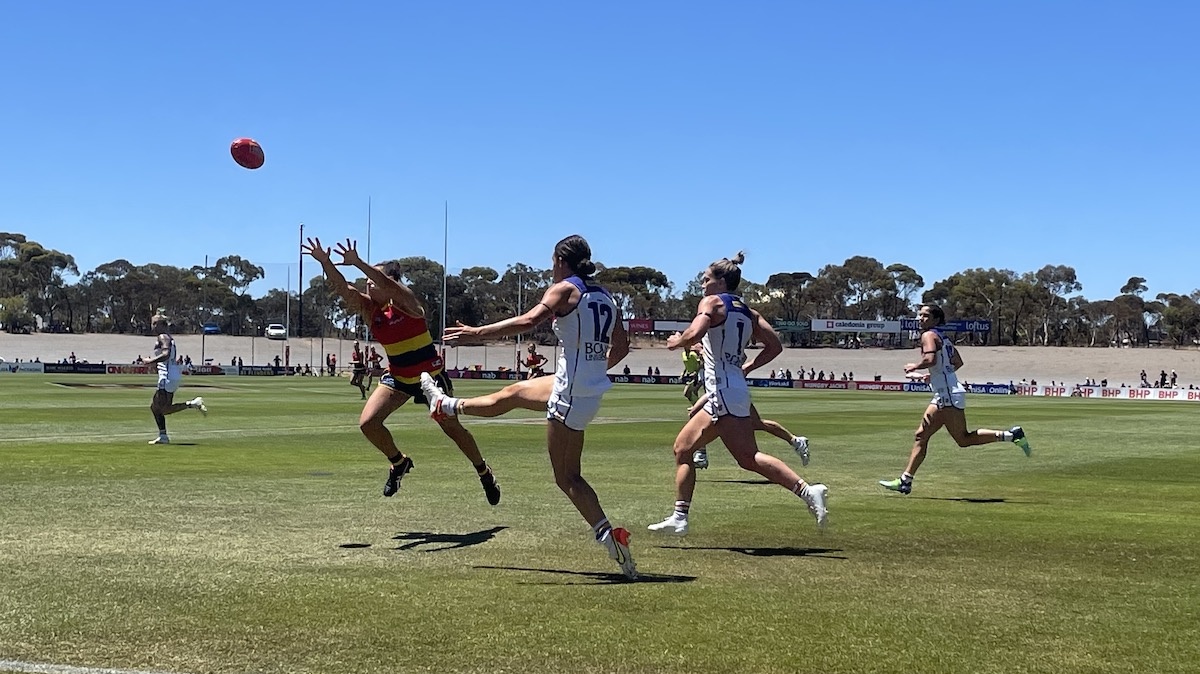 Ashleigh Woodland kicked four to get the Adelaide Crows' season started with a 30 point win over reigning premiers the Brisbane Lions.

Ashleigh Woodland kicked four to get the Adelaide Crows' season started with a 30 point win over reigning premiers the Brisbane Lions.

It was the fixture on everyone's mind going into season 2022 and it came earlier than expected due to border restrictions. The Crows were out of the blocks quickly, hunting Lions in the grand final re-match at Flinders University Oval.

In a "super exciting" round one performance, the Crows' forward line flourished, putting pressure on the Lions, who struggled to find any connection in their own forward 50.

Woodland finished with four for the Crows, while Caitlin Gould and Rachelle Martin scored the other two, as the team recorded a five-goal win.

Speaking toEdge of the Crowdpost-match, Crows' ball magnet Anne Hatchard was thrilled with Woodland's efforts and the forward line as a whole.

"Her positioning up forward was just awesome, she reads the play so well, and just the movement through all our forwards make it easier for her.

"The pressure all game [from the forwards] is just what got us over the line in the end."

The Crows' afternoon in front of goals started in the opening term, with Gould taking a strong overhead mark in the goal square and comfortably slotting Adelaide's first for the year from directly in front.

Woodland hit the scoreboard for Adelaide in the second quarter. She might have dropped the mark, but was able to quickly gather and snap the goal.

After two behinds – one rushed and one Jess Wuetschner miss – in the first term, the Lions were held scoreless in the second.

The home side held an 11 point lead at the main break, and that only grew when play resumed for the second half.

Woodland hit the scoreboard for a second time early in the third, and then she opened the fourth with an impressive snap goal for her third.

Martin chimed in with one, before Woodland sat out the back to get her fourth. The ball making its way to the back of the pack and the Crows' forward nailing it through for her fourth.

Brisbane scored its first goal for the season, a Greta Bodey snap getting the side on the scoreboard in the final term.

She has kicked the Lions' first goal in each season she's played in so far, but one goal was never going to be enough against the Crows today.

The teamwork and communication between Sarah Allan and Marijana Rajcic led the defensive line, which had an answer for every Lions' forward 50 entry.

"Holding the reigning premiers to just one goal in round one this season is just awesome," said Hatchard.

"It's just our backmans - they're amazing - the unit we've got back there and the mids pressure [was there] to help them out.

"But they just came out firing, and holding them (the Lions) to one goal is just outstanding."

Not only did Brisbane's title defence start with a loss, the side was also down two players for more than half of the match.

Defender Kate Lutkins went down with a knee injury in the opening term. She was assessed by the medical staff and took no further part in the match.

Dakota Davidson also went down to the rooms after appearing to roll her ankle moving backwards from a mark in defence, and was using crutches after the match.

After an extended preseason, Hatchard said the side was just keen to get out on the field and get the season underway.

"We were super excited to get out there, especially with all the Covid things that have been going around. It's been a tough preseason, but to go out there and get a nice, big win like that, it's super exciting going into the season."

Warmer weather was well and truly back in Adelaide after a cool week, but the Crows seemed to thrive in the condition, pushing through the no-doubt tough circumstances for a round one match and enjoying the atmosphere of a home crowd.

"It was awesome, a bit of heat out here - I do love the heat, so I was happy with it - but to have such a big crowd out here, to play in front of your home crowd, and get a win in the first round, it's awesome," Hatchard said.

"Hopefully we can continue it on into next week, playing at Norwood."

Adelaide will host North Melbourne at Norwood Oval next Sunday, while Brisbane will return home in search of its first win for the season against Carlton at new home ground, Maroochydore Oval.