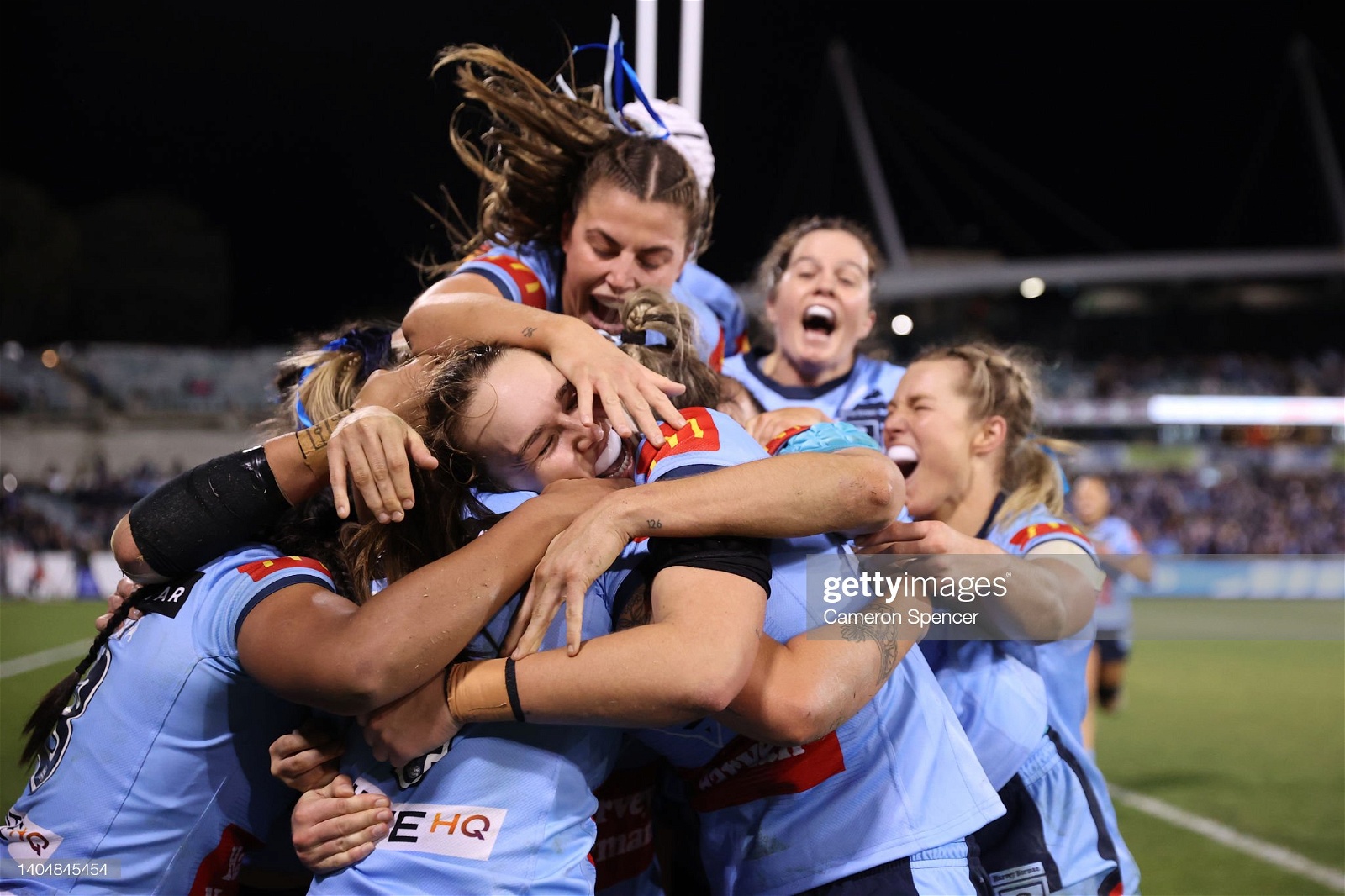 The New South Wales Blues took down Queensland 20-14 to reclaim the shield in the Women's State of Origin.

The New South Wales Blues took down Queensland 20-14 to reclaim the shield in the Women's State of Origin.

Both teams came out of the sheds strong, providing plenty of big hits. An early charge down from the Blues set the pace early, with Rachael Pearson taking the ball out of Queensland's hands on the very next play.

The New South Wales backs used their speed through the middle of the field to challenge the centres. Especially Emma Tonegato, who broke through Queensland’s defence, forcing a desperate try-saving play.

A penalty against Shaylee Bent came at the perfect time for Queensland, giving a slight kickstart to their struggling attack.

This kickstart proved enough, as it was young star Destiny Brill who claimed the first try for Queensland, powering through three defenders.

However this try did not give Queensland the momentum, as a Shenae Ciesiolka error, and Shannon Mato penalties gave NSW more opportunity to attack back. Keeley Davis provided a pinpoint kick for Emma Tonegato to chase it down and even the scores again.

Queensland’s woes continued, with Kirra Dibb providing a linebreak and try on the very next set for a 12-4 NSW lead.

A successful captain’s challenge from Queensland gave them another scrum. From here Tarryn Aiken’s incredible elusiveness managed to slip through the entire NSW defence and punch right back on the scoreboard.

New South Wales continued to make it difficult for themselves, however, with more errors and penalties giving Queensland the ball for very close-range sets. Their defence still held strong, and they protected their 14-10 lead until the halftime siren.

A messy play the ball from Emily Bass gave the Blues their first chance of the second half. Though failing to break through to the try line, another penalty game Pearson yet another chance for a goal.

New South Wales continued to play significantly tighter, giving Queensland a tougher time to find a way to even the scores again.

Backing up a stronger defence, Emma Tonegato lifted her game, even more, continuing her form from the last NRLW season.

The tight play from NSW finally gave away a penalty, leading to Evania Pelite over the try line, giving Queensland a chance to level the score.

With the crowd trying to provide a distraction, Lauren Brown’s kick hit the post, leaving Queensland trailing by two points in the final ten minutes.

Olivia Kernick seemed to be next on the scoreboard for NSW, but on review, she lost control of the ball, and the narrow lead continued.

More chances followed through with the force of Simaima Taufa giving trouble to Queensland, but the Queensland defence held up.

Moving their way back downfield, Julia Robinson of Queensland appeared to recover their kick for a long-distance try. Upon further review, she was found to be offside for the kick, and another try was overturned.

Caitlan Johnson continued to make a name for herself on Origin debut, providing a big run that set up an easy try for Isabelle Kelly on the next play. Rachael Chapman missed the conversion, that would have all but secured the win.

Despite this miss, the Blue's defence held strong, and the siren sounded, as they reclaimed the Women’s Origin Shield.

Additionally, with Women's Origin moving to a two-game series next year, NSW will now only have to win one of the two matches to win the 2023 series.

For her linebreak, 181 metres and a try, Isabelle Kelley took out the Nellie Doherty Medal as the best player of the game.

Queensland coach Tahnee Norris' comments were very proud of her side, albeit frustrated that they lost a close game.

"The girls fought right to the end, so it's frustrating with that offside try at the end.

"It was a rollercoaster - disappointing to come away with a loss"

Meanwhile the winning coach, Kylie Hilder was proud to see the team's efforts finally pay off.

"We've been building this for two years"
"The bond we have as a team, not just on the field, really showed on the field"

The game also broke the record for the largest Women's Origin crowd, at over 11 thousand.

NSW Fullback Emma Tonegato was really happy to see such a strong crowd for the match.

"It's awesome - everybody has made an effort to be here and support us."