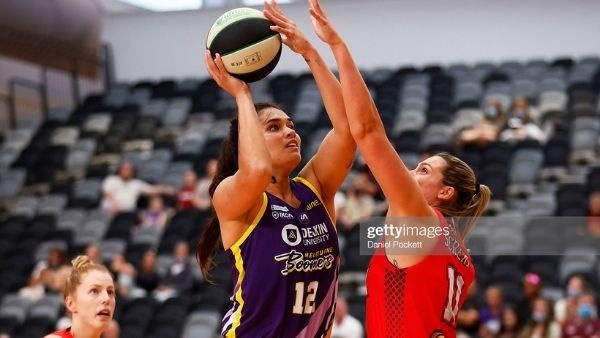 After another jammed packed week and a half of basketball, introducing Edge of the Crowds team of the week for round nine and 10A of the WNBL.

After another jammed packed week and a half of basketball, introducing Edge of the Crowds team of the week for round nine and 10A of the WNBL.

It's been another blockbuster week and a half of Basketball with a come from behind win and games going into overtime all on the cards for the WNBL.

The Edge of the Crowd's Basketball team has put together their team of the week from rounds nine and 10A of the WNBL.

With Lynx teammate Marina Mabrey spending most of the round on the sidelines, Young was able to step up across the sides three matches, scoring over 20 points in two of the matches and 19 in the other.

Young’s best game was the overtime blockbuster against the Melbourne Boomers with Opals pair Darcee Garbin and Sami Whitcomb as well as Mabrey out of the side she was able to really step up and be one of the main points scorers for the Lynx.

She finished the match with 26 points, eight rebounds and six assists. While she was great on offence she was just as good on defence with six out of her eight rebounds being defensive as well as two steals and a block.

With the game being as close as it was, winning the ball back was vital, especially as the game went into overtime.

Bec Cole was back to her very best against the Sydney Uni Flames playing an instrumental role in her side's win. While she’s spent time on the sidelines due to the after-effects of COVID-19 she really played a key role in getting the Flyers over the line.

For the match, she had 21 points, seven rebounds and four assists and was great beyond the arc sinking two three-pointers at crucial moments in the match.

Out of her seven rebounds, four of those were defensive, winning the ball back for her side so they could go down the other end and score.

Although traditionally a centre, it was hard to put Davidson on this list without tweaking her position a tiny bit. To be fair to her, she’s appeared at the four spot during the season when coupled with Ezi Magbegor on the court.

In her first game back against the Perth Lynx after missing the previous three, Davidson shined. She started in favour of Magbegor who’s sidelined with an injury. Davidson brought the spark and intensity throughout the game that Melbourne needed especially without Cayla George and Tess Madgen, both of whom are on the Australian World Cup Qualifiers team in Serbia.

Davidson finished with 13 points, eight rebounds, a steal and three blocks on 46% shooting. Even though her play couldn’t help lead the Boomers to the win over the Lynx, she helped keep the game close and competitive.

Maley continued her WNBL dominance through rounds 9 and the first half of 10 with an incredible showing against the Lynx and Adelaide Lightning. Due to her prowess in scoring and on the boards, she helped lead the Spirit to a close 82-90 loss to the Lynx and a 74-62 upset win over the Lightning.

Against Perth, she scored 13 points and grabbed 10 rebounds. It wasn’t her best game of the year which says a lot about her on-court production. It was in the upset against Adelaide where she put on one of the best games of her career.

It was an absolute team effort to hand Adelaide the upset but Maley is the majority of the reason why they came home with the win. She finished the game with 26 points, 21 rebounds, five steals, three assists, and a block. Maley was quite literally everywhere on the court and outshined all the competition.

Normally speaking one player isn’t the difference in a game but Ezi Magbegor against the Townsville Fire last week is an exception to that rule.

Magbegor brought her A-game and made her presence known all over the court. She finished the match with 20 points, two assists and six rebounds. Magbegor was just as good defensively with three of her rebounds being defensive and having two steals and two blocks.

After a reasonably quiet few weeks, it was good to see Magbegor back at her best and it showed how important she is to the  Boomers side.

Her impact in the match against the Fire made this pick an easy one for this week's edition of team of the week.

The WNBL continues on the 12th of February as the Bendigo Spirit take on the Perth Lynx in Bendigo.