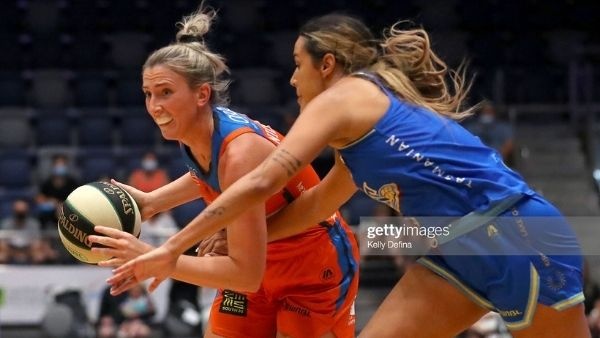 WNBL Team of the Week: Round 8

After another jammed packed week of basketball, introducing Edge of the Crowds team of the week for round eight of the WNBL.

WNBL Team of the Week: Round 8

After another jammed packed week of basketball, introducing Edge of the Crowds team of the week for round eight of the WNBL.

With another jammed packed round of basketball coming to an end on Sunday, The Edge of the Crowd has selected its team of the week for week eight of the WNBL.

Marina Mabrey has been putting together a case for best player in the league as she continues her dominant form.

She was quiet in the Lynx first match against the Capitals only scoring 9 points and having four assists and one rebound but only saw 20 minutes of game time.

Whereas in the match against the Sydney Uni Flames she almost saw out the whole match playing 29 minutes.

It was her performance in the match against the Flames that saw her retain the Point Guard position for a second week. She was a key player in getting the Lynx over the line against the Flames, scoring 34 points, five rebounds and five assists.

In that match alone she had 22 points, which made her the leading scorer for the Fire and only two points behind the games leading goaler in Cayla George.

The match itself was only 24 hours after the Fire's previous game against the Bendigo Spirit and while her performance wasn't a match-winning performance, she was still dominant having 15 points.

The Bendigo Spirit might not be the best team in the league but they aren’t the worst. The one aspect of this team that is the best in the league is Anneli Maley.

Maley has emerged into an absolute star this season and one of the sole bright spots of this Spirit squad. In Bendigo’s game against the Townsville Fire, she exploded on the boards was their most consistent shooter. She finished that game with a double-double of a team-leading 18 points and 24 rebounds. No, that 24 is not a typo. She grabbed 18 defensive and six offensive.

Despite the blowout loss to the Canberra Capitals, Maley still recorded a double-double with a team-high 15 points and 11 rebounds.

What can’t Cayla George do? She’s been the heart of the Melbourne Boomers all season. Whenever Cayla starts to heat up, the rest of the team responds. Round 8 was no different.

Despite Melbourne only playing one game this week, George put up her usual big-time numbers. In the loss to the Townsville Fire, George kept the momentum going when the team was struggling.

She finished with a double-double of 24 points, 14 rebounds, 3 assists, 1 steal, and 1 block on 50% shooting from the field and from three.

The Fire struggled to stop her and George took advantage of that. This allowed her to earn her second consecutive power forward of the week selection.

Lauren Scherf has continued her fine form this season, helping the Lynx with the sides rise up the ladder after starting behind the eight ball.

While she's been making an impact on the scoreboard it's her work defensively that has found herself in the centre position for the team of the round.

In the match against the UC Capitals, she had 15 points, 4 assists and 14 rebounds in what was a dominant display by not only Scherf but the whole Lynx outfit.

Her combined average for this round was 13.5 points and 12 rebounds on 50% shooting.