Serafino Wines in McLaren Vale hosts the South Australian date of Wine Machine, with the festival to be headlined by Flight Facilities and Lime Cordiale. 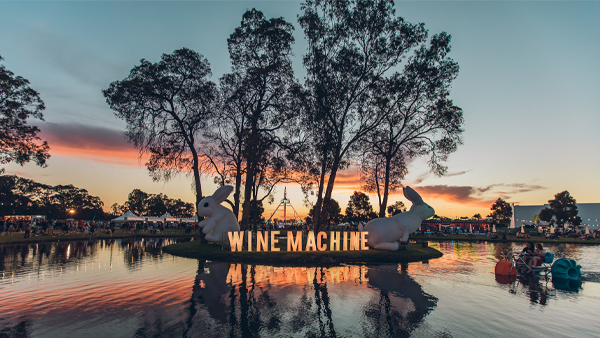 Wine Machine returns to the picturesque McLaren Vale in South Australia for this year's event on December 17, with the musical acts headlined by Flight Facilities and Lime Cordiale.

A garden party by day and a fun fiesta by night, Wine Machine, a fine dining and dancing experience with wine and music at the forefront on a day for picnics and parties, has released the lineup of artists set to grace the stage at the South Australian date later this year.

Attendees will be able to indulge in locally sourced produce while also basking in the sun with vivid backdrops all around as they laze, picnic, dance, and mingle when the festival moves to one of Australia's finest wineries on Kaurna Country, at Serafino Wines in McLaren Vale on December 17.

Festival-goers will be able to take in the surroundings, all while immersing themselves in the sounds of some of the country's most prominent artists to add to the atmosphere with Wine Machine using a single-stage format to ensure visitors have a chance to see each artist on the lineup.

Australian electronic/dance act Flight Facilities is the main act on a packed bill, and having last year released their sophomore album,Forever, the Sydney-based duo of Hugo Guzman and James Lyell will bring a blistering show to the event. Off the back of a 2021 ARIA Award win for Best Australian Live Act, pop-rock group Lime Cordiale is also set to perform a monstrous set at Wine Machine.

Wine Machine will feature Jimi The Kween as the host to entertain the crowd in between musical acts, while Poof Doof Drag Jamboree is set to serve up a stack of fierce drag madness. Jimi and the Jamboree will each collaborate in delivering mesmerising moments overall, which include interactive games and queer performance art.

Wine Machine will be hosted by Jimi The Kween. (Photo: Pat Stevenson)

Wine Machine is also visiting Whadjuk Country in Western Australia at Oakover Grounds in Swan Valley on November 22, with indie-pop duo Client Liason added to the lineup in place of Art Vs Science and Masked Wolf.

The event continues into the new year on Nuenonne Country in Tasmania's Huon Valley, hosting the festival at Home Hill Winery on January 14 with the lineup changes relating to Flight Facilities playing a DJ set, with Art Vs Science and Masked Wolf not appearing, although producer Stace Cadet and Client Liason have both been added to play DJ sets.

You can sign up for pre-sale access - with a chance to win a three-year Wine Machine double pass -here.