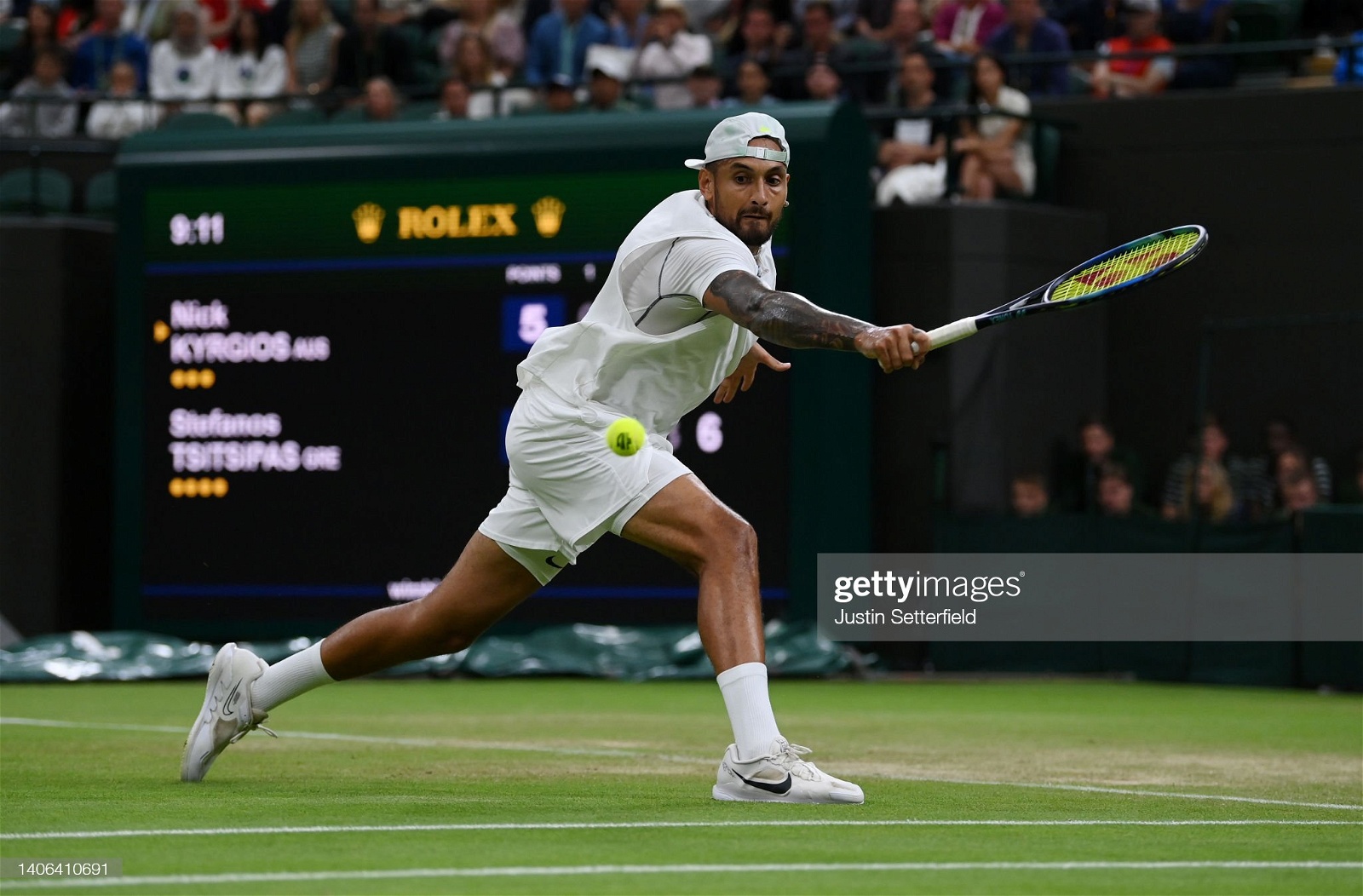 Wimbledon 2022: Four Aussies into the fourth round

Round Three of Wimbledon 2022 saw Saturday success for four Australians, while some big names, including a World Number One, crashed out.

Wimbledon 2022: Four Aussies into the fourth round

Round Three of Wimbledon 2022 saw Saturday success for four Australians, while some big names, including a World Number One, crashed out.

Four Australians have won through to the fourth round of Wimbledon on a successful Saturday at Wimbledon; a trio of men taking third round wins for the first time in 20 years. It was also a good day for Ajla Tomljanovic, who’s father had to extend their booking at a new hotel after she won a third round clash against the 13th seed.

And the seeds continued to fall, with less than half of the Ladies’ draw seeded and just 10 in the Gentlemen’s going into the last 16.

Nick Kyrgios has won through to the fourth round at Wimbledon in a drama-charged, fiery contest with World Number Five, Stefanos Tsitsipas.

In a tight opening set that went to a tie-break, the Australian lost focus and let the tie-breaker go, Tsitsipas coming away with the early advantage. It was a disappointing end to what had been some of Kyrgios’ best play, including tweeners and a service hold that took under one minute.

In the second set, Kyrgios was on the right end of the result; one break of service giving him a 6-4 advantage.

While the first set had Kyrgios firing up at a line call, it was at the end of the second that he refused to return to the court, threatening a sit-down protest when Tsitsipas was not defaulted for sending a ball into the stands.

At the end of the second, the fourth seed sent a backhand volley into the stands in frustration, narrowly missing a fan.

Kyrgios returned to Court One and found his rhythm to control the third set. The controversy continued, though, as Tsitsipas was given a code violation and point deduction for his frustrated outburst at another underarm serve perfectly executed by Kyrgios.

In the fourth set, the pair required another tie-break to split them. At 7-6, Tsitsipas had set point to take it to a fifth, but the Australian serve-volleyed and the pressure was back on Tsitsipas.

Serving to stay in it, Tsitsipas went down the middle, but after a short cross-court rally, it was a drop shot that caught the World Number Five on the back foot and sent him packing.

Kyrgios now sets up a Round of 16 clash with American Brandon Nakashima, who took out Canadian seed Denis Shapovalov in the second round. A semi-final match up with Rafael Nadal looking even more tantalising now; the Spaniard defeated 27th seed Lorenzo Sonego of Italy 6-1, 6-2, 6-4 in his third round match.

Prior to Kyrgios winning his way through to the fourth round, two other Aussie men had won their third round contests. The last time three men featured in the Round of 16 was in 2002, when Mark Philippoussis, Lleyton Hewitt and Wayne Arthurs progress through.

Playing on Court One prior to the Kyrgios-Tsitsipas fireworks, Alex de Minaur breezed past British wildcard Liam Broady to make this his best Wimbledon result ever.

De Minaur sent down 13 aces to his opponent’s three but, despite not having it all his way, the straight sets victory was over in under two and a half hours.

His fourth round appearance at Wimbledon comes after de Minaur made the Australian Open Round of 16 for the first time early this year. His opponent will be Chile’s Cristian Garín, before a potential quarter-final with a spirited compatriot.

Jason Kubler’s run also continued with a five-set defeat of American Jack Sock. In the longest match of the tournament, four hours and 15 minutes, Kubler responded to Sock’s fight back in the second and third sets by taking the final two for victory.

The win was Kubler’s first experience at a five-set match, a 1-0 record with the Grand Slam length contest an exciting result for the Aussie who has enjoyed an impressive run of 22 wins from 25 matches.

Despite his gruelling schedule in recent months, the Australian still had the stamina and the skill to outlast and outplay the experienced Sock.

The world Number 99 now faces 11th-seed, American Taylor Fritz in the fourth, who is yet to drop a set from his opening three wins.

Elsewhere in the men’s draw, Novak Djokovic won through in straight sets over 25th seed Miomir Kecmanovic. Jannik Sinner became the youngest Italian through to the fourth round of Wimbledon in the open era with a straight set win over John Isner, and local ninth seed Cameron Norrie defeated Steve Johnson to book his place in the fourth round.

A fourth Australian won through to the fourth round on Saturday night, as Alja Tomljanovic - the only Australian female left in the draw - defeated Barbora Krejcikova.

The 2021 French Open champion took the opening set comfortably off Tomljanovic, before the Australian fought back to take the second set.

After going up an early break, Tomljanovic lost her lead to the fighting Czech and the set was in the balance at four games all.

Serving well all day, Tomljanovic stayed ahead with her service hold at 5-4 and was able to complete the set with a stunning backhand return up the line to level the match at a set apiece.

In the third set, it started much the same, on serve until the Australian found her break opportunity to go up 4-2. She consolidated at 5-2 and then served out the match, though not without a fight from Krejcikova in the final service game.

She has an opportunity to match her quarter final result of 2021 too, after Alize Cornet’s stunning upset over World Number One Iga Swiatek.

The veteran ended Swiatek’s run of 37 consecutive wins in straight sets, the demolition job coming eight years after Cornet beat another World Number One on Court One, Serena Williams in 2014.

It is the second time the Frenchwoman has made the Round of 16 at Wimbledon, her dominant play was too good for Swiatek in every facet of the match.

Cornet’s compatriot, Harmony Tan continued her exciting run in the Ladies draw, dispatching Brit Katie Boulter in under an hour.

Amanda Anisimova also had a day to remember, moving through to the fourth round with a win over fellow American, and 11th seed, Coco Gauff.

After dropping the opening set in a tie-break 7-4, the World Number 25 completed the comeback, ripping through two dominant sets to progress.

While seeds Ons Jabeur (3rd), Jelena Ostapenko (12th) and Simona Halep (16th) moved through without much trouble, the same cannot be said for Maria Sakkari (5th) who fell to Tatjana Maria and Angelique Kerber (15th) who lost to Elise Mertens (24th).