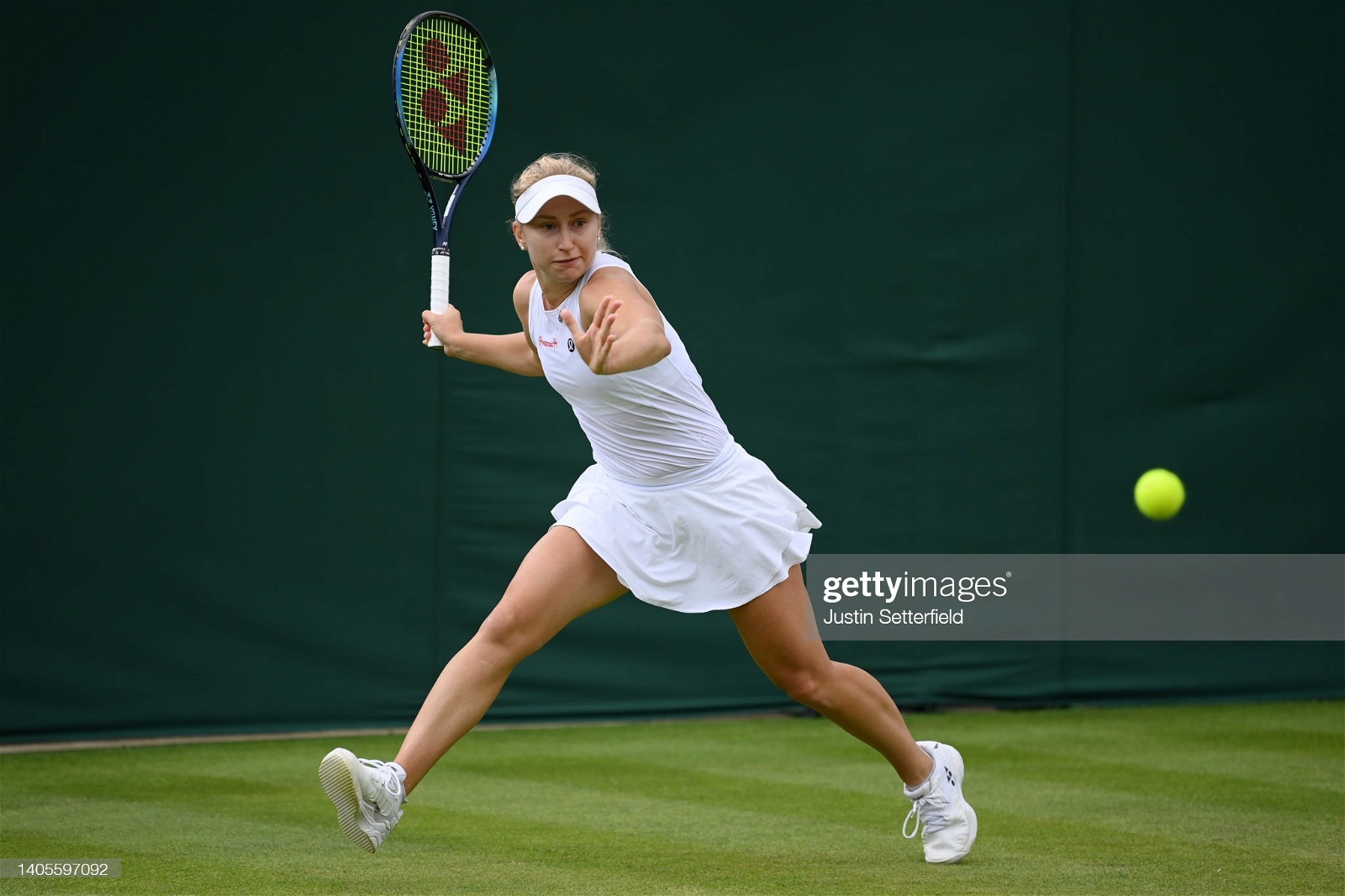 15 Aussies took to the court for the first round but many faced tough defeats with only one woman emerging on the women's side of the draw.

15 Aussies took to the court for the first round but many faced tough defeats with only one woman emerging on the women's side of the draw.

By  Jacqui Dodd and Dan Coppel

Wimbledon 2022 was never going to be an easy ride for the 15 Australians entered into the main draw but after a brutal first round, only six emerged on the other side to reach the second.

Saville stumbles before the line

Wildcard entry Daria Saville came so close to reaching the second round for the first time at Wimbledon since 2018 in her match-up against Bulgarian Viktoriya Tomova.

The Australian didn't get off to a flying start, getting broken in the first game, but tested Tomova in her opening two service games forcing deuce three times.

However, it wasn't until the 10th game that she managed to break back, hitting three winners in the tight game.

The Bulgarian wasn't shaken, however, breaking back in the following game, bolstered by Saville's mounting errors which prevented her from taking control of the first set.

Tomova served out the set in a 40-0 game, ending the 56-minute set with a forced error from the Australian.

Saville wouldn't open the second set with the same mistakes as the first, holding serve with two aces and a winner.

However, she was broken for a third time in the match in the third game, but Saville wasn't out of the set yet.

In the following game, she managed to break back in a nine-and-a-half-minute game that went to deuce six times with the Saville eventually closing out the game on the 18th point.

The Australian didn't let up on Tomova's serve in the remainder of the set, sending the next service game to deuce four times, despite not managing to break her serve, before breaking again in the eighth game with back-to-back winners.

Much like Tomova in the first set, Saville closed out the second in a 40-0 game sending the match into a decider.

The third set didn't get out to the start the Australian would have hoped, dropping the first three games with Tomova looking to strike.

Saville's serve was still on her side hitting two aces in the fourth game to win her first game of the set and managing to hold out in the sixth to stay in the match.

It would take a huge effort from Saville to fight back into the match sitting at 2-5 down in the third but she managed to find some momentum to win the next game 40-0 before breaking back.

The Australian drew level in the 10th game of the third set, but she couldn't keep up with Tomova who dominated the next game and managed to finish the match off, breaking Saville's serve, despite the Australian hitting two winners in the game.

Only two points split the two for the match with Tomova winning 120 to Saville's 118, while Saville's attacking style resulted in her scoring 54 points off of winners to Tomova's 26.

Jamiee Fourlis was dominated by Kirsten Flipkens, going down in straight sets. Fourlis battled hard in the first set, only narrowly falling away, but was dominated in the second set, as she struggled to get her serve going, giving away six break points.

Zoe Hives drew a short straw, coming up against the fifth-seeded Maria Sakkari. Sakkari showed why she is the fifth seed, with a towering performance, as she blew Hives off the court in the first set, 6-1. While the second set was more balanced, Hives was never able to get the play on her terms.

Astra Sharma narrowly fell to German Tatjana Maria. Sharma jumped out of the blocks to take the first set 6-4, but Maria worked her way back into the match, and took the second and third sets narrowly, to continue her run in the tournament.

Qualifier Maddison Inglis was another Australian to jump out of the blocks in the first set, taking it 7-5 over Dalma Gálfi, before struggling to keep her momentum going. Gálfi dominated the second and third sets to take the match comfortably in the end, bundling the Aussie out of Wimbledon.

Typically at home on grass courts, it was expected that Nick Kygrios would take out his first round match against Wildcard Paul Jubb without any worries.

However, nothing can be easy for the 27-year-old Australian who had to fight to get over the line.

Both started strong in the first set holding serve in the first six games, however, Kyrgios' composure started to slip early arguing with the officials which continued on and off for the remainder of the match.

As a result, it wasn't long before Jubb managed to get the upper hand and break Kyrgios' serve in the eighth game.

All Jubb needed to do was hold serve in the next game to take out the set and despite Kyrgios hitting a smooth forehand winner in the second point of the game the Briton won the next three points to close out the set.

Unphased by the first set Kyrgios kicked it into high gear in the second hitting two aces and a forehand winner in the opening game of the set.

Jubb managed to hold serve in the second game but from there the Australian was in control breaking for the first time in the match in the fourth game of the set.

From there it was the Kyrgios show, winning the remaining three games with the set lasting just 24 minutes.

The third set started much like the first with both players holding serve but Kygrios still had some pep in his step scoring a majority of his points in the opening games from winners and aces.

All too soon the scores were level at 5-5 before Kyrgios managed to break Jubb's serve in a 40-15 game before serving out the set in a more convincing fashion.

If the third set was tight then it was near impossible to split Jubb and Kyrgios in the fourth.

With neither one managing to swing momentum enough in their favour. Kyrgios came the closest to breaking serve in the 11th game, sending the game to deuce twice before Jubb closed out the game.

Ultimately it was the Australian that was the first to falter when the set went to a tiebreak, going back and forth with points early before Jubb took over and won four consecutive points to send the match to a fifth set.

Kyrgios didn't look convincing in the opening points of the final set, giving Jubb two break point opportunities before he switched back on and managed to hold the opening game.

From there the opening games played out as they had for the majority of the match before Kyrgios kicked it up a gear in the sixth game to break Jubb's serve at 40-15 and put himself back in the box seat to win the match.

However, Jubb wasn't done fighting, breaking back three games later with his relentless pressure on Kyrgios despite the Australian saving two break points.

Both managed to hold serve in the next two games, with Kyrgios needing to break in the next game to avoid sending another set to a tiebreak.

It took two break point opportunities to get there but Kyrgios finished off the Briton due to an unforced error from his opponent.

For a five-set match, it only lasted three hours and five minutes due to the first two sets taking less than an hour combined. Kyrgios' powerful serve proved dominant hitting 30 aces for the match and winning 75 per cent of the time off of his first serve.

Thanasi Kokkinakis dominated Kamil Majchrzak to take the first round match in straight sets. Kokkinakis was challenged in the first set, as the Pole forced a tiebreaker, but once the first set went his way, The Australian was able to build momentum and close out the match in style.

Max Purcell faced a tough draw, with talented Frenchman Adrian Mannarino on the other side of the court. Mannarino took the first two sets before Purcell fought back to force a deciding fifth set. As the match came down to the wire, Purcell didn't have the legs to hold his momentum and hang on, as he fell to the Frenchman 6-4.

Alexei Popyrin was another Australian who fell at the hands of a Frenchman, going down to Hugo Gaston. Gaston took the first set, before Popyrin fought back to make it 2-1, including taking the third set 6-0. He wasn't able to keep it going, as Gaston fought back to take the fourth set in a tiebreak, and the fifth set with a break to march on.

Top-ranked Aussie Alex de Minaur faced off against Bolivian Huge Dellien. The 19th seed jumped out of the blocks to take the first set 6-1, and then cantered home to take the match in straight sets, winning seven break points, and half of the points on Dellien’s serve.

James Duckworth drew wildcard Andy Murray in the first round, and while he took the first set, he wasn't able to hold on and take the match. Murray’s first serve was too dominant, as he showed his long-held talent to overpower the Australian.

John Millman drew 25th seeded Miomir Kecmanović in the first round. The Serb won the first set, but Millman fought back to take the second, and level the match. After that though, Millman’s serve struggled, as he gave away 5 break points to the Serb over the rest of the match, to bow out in four sets.

Jordan Thompson was all control in his first round match against Spaniard Roberto Carballes Baena, winning seven break points for the match and hitting 10 aces. It's not smooth sailing for the Aussie who will face fourth seed Stefanos Tsitsipas in the second round.

Jason Kubler faced off against 28th seeded Dan Evans. Evans, in front of his home crowd, faltered early, as the Aussie jumped out of the blocks to take the first set 6-1. After that, he continued strongly, taking the match in straight sets, as he held his serve across the entire match in a dominant performance.