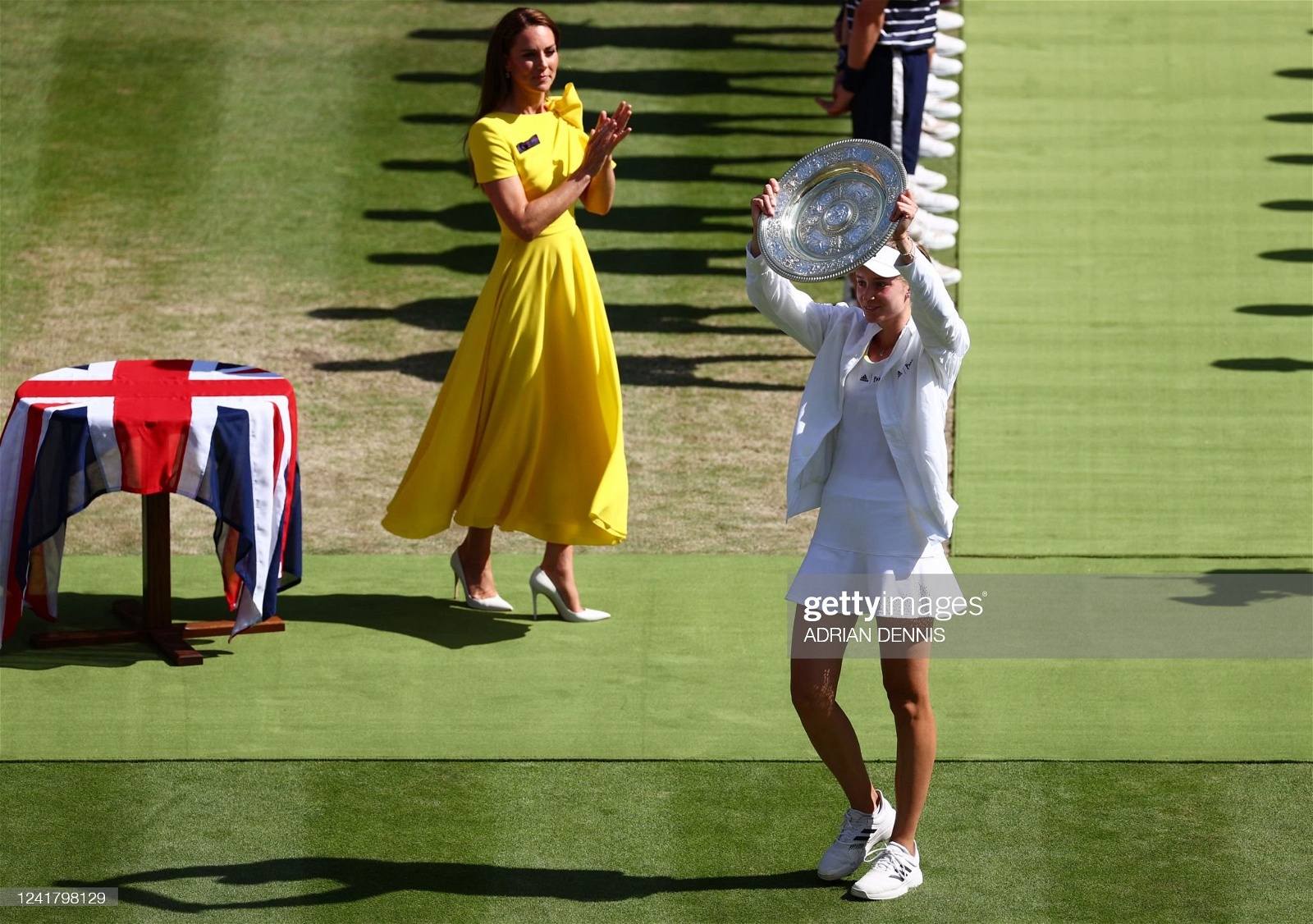 History was made on Saturday at Wimbledon, with two first-time Slam finalists competing against each other for the Ladies Singles title.

A stunned Rybakina took some time for her Championship win to settle in, but the emotions came and soon the reality of becoming the first Kazakhstan woman in the Open Era, in the centenary year of Centre Court, to be crowned Champion of Wimbledon, landed.

Road to the final

While challenged more in the quarter and semi finals, Jabeur has had an impressive run to the final of Wimbledon 2022, maintaining her threat as one of the best on grass presently, and dominating most match-ups.

It started with straight sets wins over Mirjam Bjorklund, Katarzyna Kawa and Diane Parry, which the Tunisian continued against 24th seed Elise Mertens in the fourth round. Marie Bouzkova posed a different challenge, but after dropping the first set, Jabeur recovered for two impressive 6-1 sets.

Finally, in the semi final, despite letting Tatjana Maria get on the board in the second, Jabeur closed it out in the third for a place in the Ladies Singles final.

Rybakina’s road to the final has featured her fair share of tiebreakers, but just one three set match. Her tournament began with a win over American CoCo Vandeweghe (7-6, 7-5), and she continued similarly with a 6-4, 7-6 defeat of Canadian Bianca Andreescu.

Qinwen Zheng of China posed a threat in Round Three, taking Rybakina to a tie-break in the opener, but the 17th seed was able to see herself through with one break in the second.

A straight sets victory over Petra Martic in the fourth round (7-5, 6-3) was followed by her one three set match in the tournament so far, a meeting with Australian Ajla Tomljanovic in the quarter finals (4-6, 6-2, 6-3).

At the toss, Jabeur elected to receive and Rybakina landed some big serves. Although the Tunisian was able to get a couple of points off returns, Rybakina held for the opening game.

A nice return up the line got Rybakina into Jabeur’s first service game, however the World Number Two held comfortably to keep it on serve.

To the gasps of the large crowd in at Centre Court, the first break point was available to Jabeur and she didn’t have to work overly hard for it, as Rybakina put too much heat on the racquet early.

A cross court drop shot hit the inside of the sideline and it seemed the Tunisian was feeling good today. She held comfortably, to love, and consolidated the break.

Rybakina hit back, then missed a backhand, sending it long on the cross court shot. Her first serve dropped a little under the pressure, and Jabeur put her on the back foot with a strong, deep backhand.

Jabeur miscued and missed her opportunity for a double break, though was offered another chance with another long shot off the racquet of Rybakina.

This time the drop shot didn’t make it over the net, and Rybakina took advantage back with a forehand winner and held after an error from Jabeur.

The tough hold gave Rybakina some confidence, and the missed opportunities were a little frustrating for Jabeur, but the Tunisian held to remain ahead in the first set.

After Jabeur held to love to move 5-3 ahead in the opening set, the occasion appeared to be getting to Kazakhstan’s first Wimbledon finalist. Missing a put away at the net and then another easy winner, Rybakina was broken for a second time, giving Jabeur the first set 6-3.

Jabeur looked the more comfortable player in the opening set, landing 75 per cent of her first serves (to Rybakina’s 58 per cent), serving two aces and making only six unforced errors.

The Tunisian looked a little jittery to start the second set, unable to land her first serves and play the slice and similar shots that gave her the upper hand earlier.

Down a set, Rybakina was free to play aggressively and started hitting her shots.
The body language of both players was changing, as the momentum was certainly shifting out on court.

Despite Jabeur challenging the serve of Rybakina, the World Number 23 was able to hold, consolidating her break for a 2-0 lead in the second set.

Entertaining the crowd with a header in frustration and then a tweener, Jabeur was in good spirits, but it was Rybakina who was hitting her straps, making backhands up the line and appropriately smashing winners off Jabeur’s second serves.

Winning just her third point (from eight) on her second serve, Jabeur finally held to be on the board in the second.

Rybakina faced a break point in her service game, but sent a winner to the corner of the court off the forehand and did the same again when facing another break point.

The slice wasn’t working for Jabeur, who was unable to put away a third break opportunity in the more than eight-minute-long game.

In the opening set, Jabeur would have put away balls down the line, but set up again for her, the World Number Two was crumbling and missing the easy winners to go down a double break.

Rybakina’s first ace came an hour into the game, rare for the 17th seed, but she pressed on and everything seemed to be falling her way.

With everything going against her, Jabeur managed a couple of strong serves to hold at 5-2 and force Rybakina to serve out the second set.

Swinging cleanly now, Rybakina held perfectly to love to level the match at a set apiece.

Serving first, Jabeur needed to get herself back into the final, as her dominance seen in the first set completely disappeared.

A late challenge on the second point in Jabeur’s opening service game saw Rybakina’s winner land in by mere millimetres.

The Tunisian was being run across the court by Rybakina, who had pulled back a little and was hitting better shots and better spots on Centre Court.

Jabeur hit a beautiful slice, but it was returned by Rybakina and the next shot went straight back to Rybakina who put it away.

The early break highlighted just how much the momentum had shifted, Rybakina’s game in full flight now and Jabeur making the costly errors.

Jabeur’s predictability was becoming an issue, as Rybakina was able to read and respond to the plays off the Tunisian’s racquet.

Holding serve, cheered on by the crowd, Jabeur won moreso do to the errors off the racquet of Rybakina. The Kazakhstani was unable to finish plays, gifting Jabeur a game.

After Rybakina held serve, though, not without some challenges, the crowd lifted again to cheer on Jabeur.

However, the Tunisian struggled with her first serve and hitting winners, rather setting up balls for her opponent to punish.

Jabeur once again found a way to hold her serve, giving herself another chance to break back as Rybakina stepped up to the service line, 3-2 in the decider.

A drop shot that dribbled over the net, slice and lob winners, and Jabeur set herself up with three break point opportunities.

After letting the first go, on the second Jabeur thought she had it and challenged, but her shot fell wide, and the third was saved by an impressive serve and return from Rybakina.

Rybakina pulled herself out of the service game, saving all three break points to keep her advantage in the final set.

Facing a break point in her own service game now, Jabeur was unable to respond. A second serve giving Rybakina to take control of the point, which she did, and send Jabeur all over the court before she hit one long.

The break set up Rybakina to serve for the set and Championship, ahead with a double break.

Rybakina started strong, before Jabeur hit a winner and took the lead in the game. Errors off the racquet of Jabeur ensued and the Tunisian lost the game, set and Championship.

Runner-up, Jabeur was humble and reflective in defeat, thanking her team, congratulating her opponent and acknowledging her place in history as the first Arab woman to compete in a Grand Slam final.

“I want to congratulate Elena, she played amazing. Her and her team, great job, I mean, she deserved this…

“I love this tournament so much and I feel really sad, but it’s tennis, there can only be one winner…

“I’m really happy that I’m trying to inspire, you know, many generations from my country. I hope they are listening.

“And I also want to thank this beautiful crowd.”

Serious on court today, with subdued celebration post-match, Rybakina turned into a chatty character when the microphone came out after she’d accepted the Venus Rosewater Dish.

“I was super nervous before the match, during the match and I’m honestly happy it is finished, to be honest, because really never felt something like this and I just want to say a big thanks to the crowd, the support was unreal.”

She congratulated Jabeur on her performance today and in this tournament, joked that she’d never need to do fitness training again and thanked her parents (last, but not least!), because without them she “wouldn’t be here, for sure”.

“I didn’t expect that I’m going to be honestly in the second week of a Grand Slam like Wimbledon, to be a winner is just amazing. I honestly don’t have the words to say how happy I am, but I wouldn’t be here without my team.”