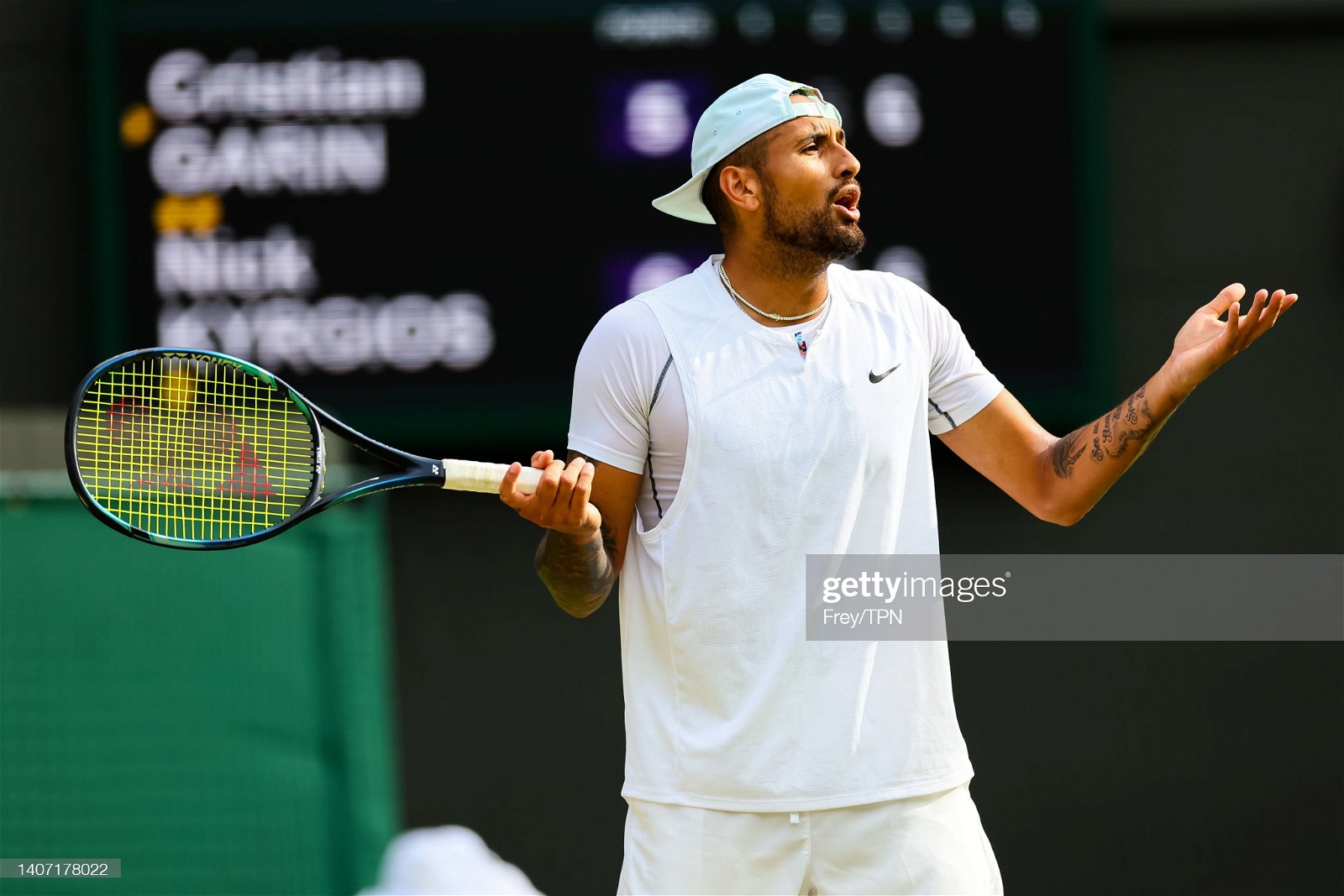 Australia's hopes brightened at Wimbledon 2022 as Nick Kyrgios moved into the semi-final, while the Aussie doubles teams snuck through another round.

Australia's hopes brightened at Wimbledon 2022 as Nick Kyrgios moved into the semi-final, while the Aussie doubles teams snuck through another round.

As the quarter-finals for Wimbledon 2022 came to a close in the singles draws one Australian remains a contender for tennis's oldest title. Meanwhile, in the doubles, the Australian contingent has continued to battle on with one team reaching the final.

In the men's singles draw Nick Kyrgios was the sole Australian remaining, facing Christian Garin who defeated Alex de Minaur in the fourth round.

It had been a long eight years between Kyrgios' Grand Slam quarter-finals appearance but after a composed fourth round the Australian looked to be in the box seat.

The 27-year-old didn't get off to a great start losing nine consecutive points to open the match two games down.

It didn't take long for Kyrgios to break back, doing so in the sixth game of the match and speeding through his service games serving five aces in the first set.

Both players managed to hold serve in the next few games before Kyrgios pounced on a weaker service game from Garin and claimed the set by breaking Garin's serve 40-0.

The second set opened with back-to-back tight games, with both Kyrgios and Garin managing to hold serve despite neither really having the upper hand but the Australian fired up winning the next eight points in a row to break Garin's serve and take an early 4-1 lead in the second set.

The Chilean had to fight for every point in his service games, attempting to out-hit Kyrgios to no avail. However, he managed to wiggle back into the contest holding serve for the remainder of the set.

Meanwhile, Kyrgios continued to dominate in his service games finishing off the set with ease, but started to talk to himself and his box more sending out alarm bells that perhaps we were in store for another Kyrgios meltdown.

The final set couldn't be tighter with both players fighting back from multiple break point opportunities, with Garin looking like he finally might have the upper hand.

However unable to convert, meant that Kyrgios could fight his way back into games and force the set into a tiebreak.

The Australian reset for the tiebreak, getting out to an early lead but gave Garin a look in concerning four consecutive points. But he managed to come back and was the first to reach match point.

It looked like it was going to kick off at match point when a line umpire incorrectly called the ball out, with Kyrgios firing up at the chair umpire despite already having determined that they would replay the point.

Despite the brief verbal spar, Kyrgios was able to turn it back on for the final point, outplaying Garin in the rally with the Chilean hitting the ball out off of a backhand.

It's the first time an Australian has reached the semi-finals in the men's singles draw at Wimbledon since Lleyton Hewitt in 2006, with Kyrgios still set to face his toughest matchups yet.

Kyrgios will face Rafael Nadal in the semis, who battled through injuries in his five-set epic against American Taylor Fritz.

It was a match with twists and turns until the four-hours and 21-minutes match all came to a head in a fifth-set tiebreak, where Nadal proved why he's been the best player of 2022 downing the American 4-10 in the tiebreak.

On the other side of the draw, no one will be going into the semi-finals on fresh legs with both matches going to five sets.

Novak Djokovic did what he does best and defended against a two-set deficit, to Italian Jannik Sinner, to take out the final three sets and move through to yet another Grand Slam semi-final.

Tomljanovic falls in the quarters once again

Ajla Tomljanovic got out to a bright start in her second Wimbledon quarter-final in two years against Kazakhstan's Elena Rybakina but failed to get over the line.

Both players held serve in their opening service games, but by the third game, the fight was on with Tomljanovic getting the upper hand in a nine-minute game to break Rybakina's serve.

In one of the cleanest sets, viewers have seen for the tournament the Australian lost two points from unforced errors in the first set, managing to continue to hold serve while Rybakina's powerful serve kept her in the match, serving five aces in the first set.

However, the Australian managed to break back quickly to stay in the hunt, before holding serve to draw the score level.

But Tomljanovic's fight back didn't last long with Rybakina winning the next four games only losing one point in the process of taking out the set.

Much like the second set Rybakina opened the third set, breaking Tomljanovic's serve and getting out to an early lead.

The Australian continued to fight holding serve but even that was a scrap for Tomljanovic before she managed to break Rybakina late in set.

Ultimately it wasn't enough with Rybakina serving out the match with an ace to book a spot in the semis.

Simona Halep will face Rybakina in the semi-finals, defeating American Amanda Anisimova in straight sets, continuing her dominant run with the Romanian yet to drop a set at Wimbledon this year.

Tatjana Maria won the battle of the Germans in a three-set classic against Jule Niemer, with both players going to the net frequently throughout the match.

Despite flying under the radar, the Australians in the doubles have flown under the radar with multiple teams making it through to the later stages of the draw.

In the women's doubles, both Aussies fell in three sets with Ellen Perez and American partner Nicole Melichar-Martinez, taking out the first set before losing to the second seeds Barbora Krejcikova and Katerina Siniakova.

Matthew Ebden's doubles form extended into the mixed doubles with partner Sam Stosur, beating the American combination of Jack Sock and Coco Gauff to reach their second grand slam final as a pairing.

They'll face second seeds Neal Skupski and Desirae Krawczyk in the final, with the Australians seeking their first mixed doubles title as a pairing.