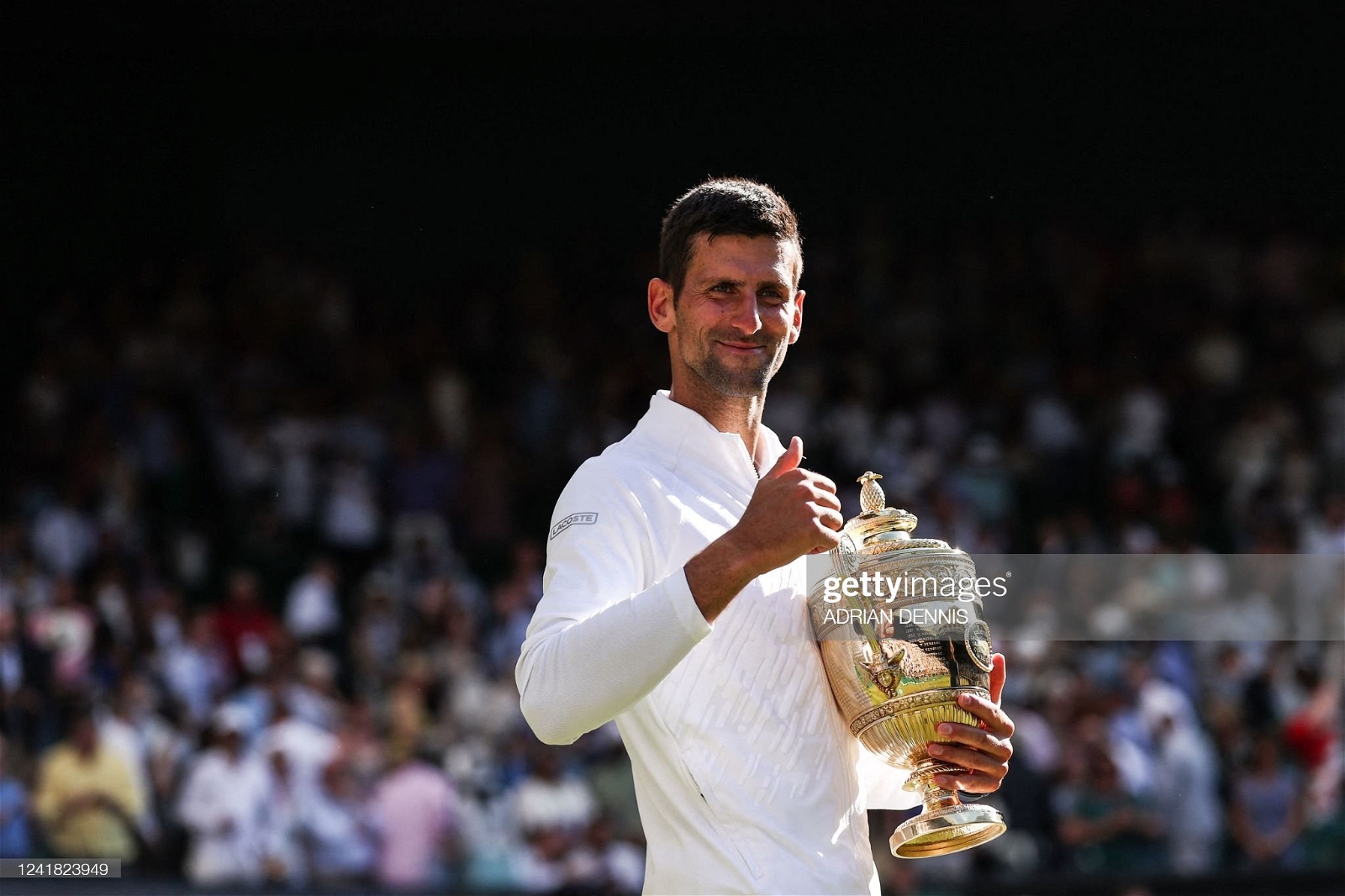 Novak Djokovic did what he's done many times before on Sunday night, defeating Nick Kyrgios in four sets to complete a stunning men's singles tournament at Wimbledon.

Novak Djokovic did what he's done many times before on Sunday night, defeating Nick Kyrgios in four sets to complete a stunning men's singles tournament at Wimbledon.

After a challenging 2022 Novak Djokovic has claimed his seventh Wimbledon title defeating Australian Nick Kyrgios in four sets in what was bound to be a fascinating affair from the outset.

It was a composed start from Kyrgios, looking like he'd been in more than a few Grand Slam Finals.

Both players held serve early in the opening set with Djokovic's serve taking time to warm up, his serve failing him when he needed it most in the fifth game going down a break following a double fault.

From there the Australian cruised to take out the first set 6-4, showing no signs of the firecracker that tennis fans have grown accustomed to in recent years, giving up just five points on serve in the first set.

Djokovic showed no signs of drama in the second set, opening with a 40-0 service game and challenging Kyrgios' serve immediately, with the Australian relying on his monster first serves to get him through the second game.

However, by the fourth game, Djokovic was able to claim a career first win, breaking Kyrgios for the first time in their three outings in another 40-0 game.

All too soon the 27-year-old's composure slipped, yelling at his team box in frustration, which continued on and off for the remainder of the match.

The Australian scrapped to try and take a break back squandering two break point opportunities in the following game but held the top seed at bay to not allow Djokovic to gain control over the entire match.

By the ninth game, some of the composure returned for Kyrgios getting out to a 40-0 lead to potentially save the set before Djokovic worked his way through the three break points to force the game to deuce.

It took two attempts at set point to close out the set but Djokovic drew the match level.

Djokovic looked to break immediately in the third set but the Australian was able to hold him off, dismissing two break point opportunities.

Nearly every game looked competitive in the third, with both players stealing points off of one another's serve but failing to convert.

However, as it's been many times before it was Kyrgios' head that got in the way arguing with the chair umpire, his box and even an individual in the crowd, eventually giving up a break after being 40-0 up.

The Australian was unable to break back in the next game conceding a second set, going a set down to the 20-time Grand Slam winner for the first time in his career.

Venting his frustrations between the sets, Kyrgios entered the fourth set more level-headed than he had been in the previous two, ready to attempt to force a fifth set and keep himself in the match.

Coming forward to the net more, Kyrgios appeared to find a better rhythm but struggled to find an answer for Djokovic's volley, often too slow to react or moving the wrong way to reach the ball in time.

Both players held their serve for the set forcing a tie-break for the fourth set.

Looking completely unnerved by the theatrics of Kyrgios, Djokovic got out to an early lead, helped by several unforced errors from Kyrgios and with five match points it was a question of how long it would take for the Serbian to close out the match.

It took three with Kyrgios winning two points off his serve before Djokovic finished the match off, claiming a seventh Wimbledon title.

The Australian was gracious in defeat despite a final act of rebellion by sporting a red cap despite Wimbledon's strict all-white uniform rules, praising Djokovic's performance.

"He's a bit of a god I'm not gonna lie, I thought I played well.

"First of all I want to congratulate Novak and your team, of course, you've won this championship I don't even know how many times."

"To all the ball kids and umpires, I know you and I have a very tough relationship at times but thank you and the crowd, it's been an amazing couple of weeks for me personally."

Although Kyrgios claimed to be too exhausted to return to another grand slam final Djokovic offered his words of support, praising the 27-year-old Australian.

"Nick, you'll be back. Not just Wimbledon but finals. I know it's tough to find consolation words after a tough loss like this but you showed why you deserve to be one of the best players in the world, particularly on this service.

"Congrats to you and your team for an amazing tournament, I wish you all the best man.

"I really respect you a lot and think you are a phenomenal tennis player and athlete, an amazing talent and you've been hearing all that for many years but now everything is starting to come together for you so I'm sure we're going to see much of you in the later stages of grand slams.

"I never thought I'm going to say so many nice things about you considering the relationship, okay it's officially a bromance."

Reflecting on the title, Djokovic struggled to find words before recounting the first time one of his heroes, Pete Sampras won Wimbledon for the first time and how it inspired his career.

"I've lost words for what this tournament, what this trophy means to me, to my team, to my family. I've said this many times, it always has been and will be the most special tournament in my heart.

The one that motivated me, inspired me to play tennis in the small little mountain resort, in Serbia where my parents used to run the restaurant when I was four and a half/five years old.

"I saw Pete Sampras win his first Wimbledon in '92 and I asked my dad and mum to buy me a racquet and my first image of tennis was grass and Wimbledon and I always dreamed of coming here. Just playing in this court and then, of course, realising the childhood dream and winning this trophy.

"Every single time it gets more and more meaningful and special, so I'm very blessed and very thankful to be standing here with the trophy."