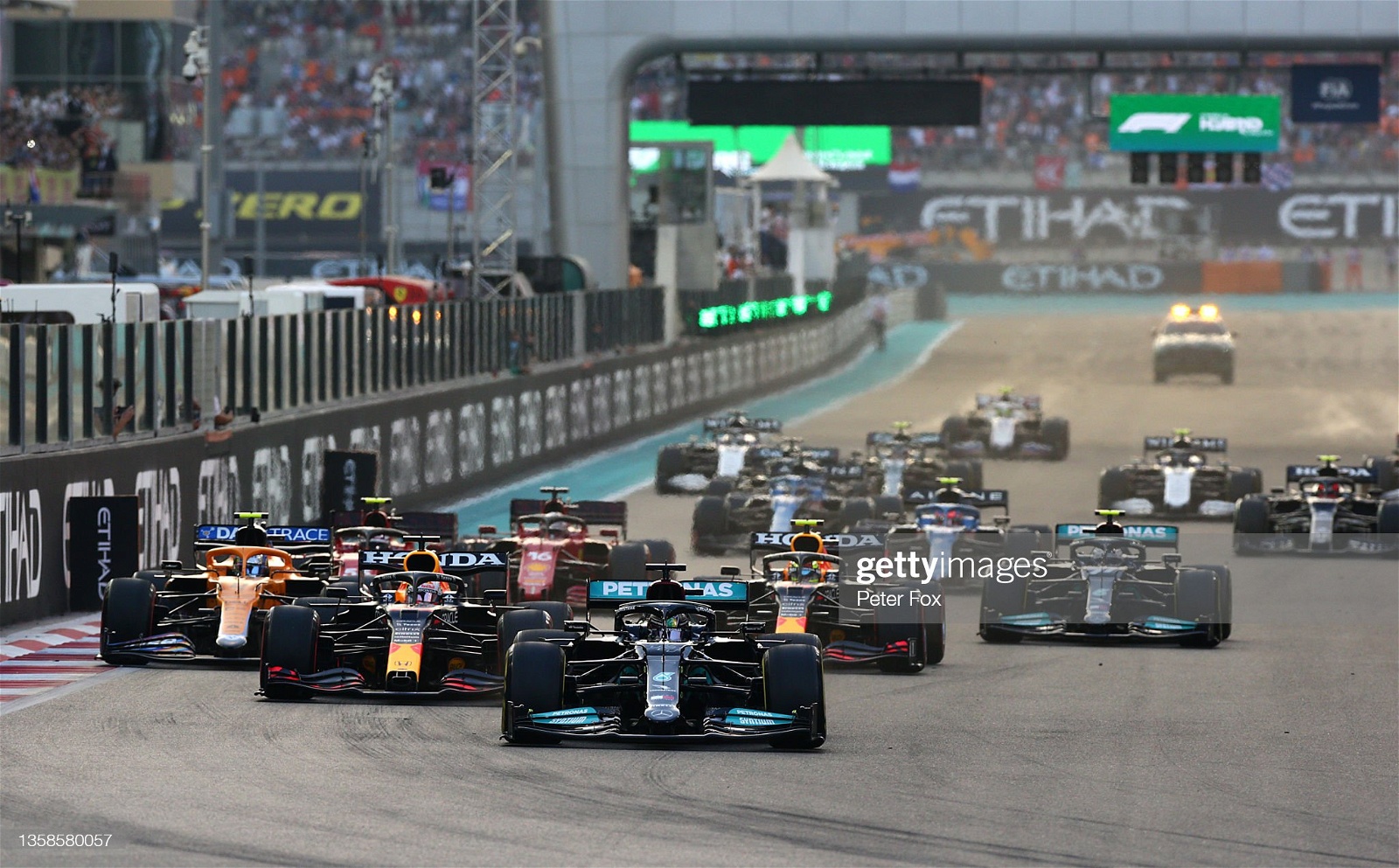 Lights out, camera, action - Netflix's 'Drive to Survive' returns for Season Four! Here are the storylines expect to make the final cut.

Lights out, camera, action - Netflix's 'Drive to Survive' returns for Season Four! Here are the storylines expect to make the final cut.

Lights (out), camera, action!Drive to Surviveis back for season four and fans can't wait.

On February 28 the first trailer was dropped, leaving fans anticipating what's in store for the docuseries following a dramatic, tense season. The hit series come outs on March 11 worldwide, before lights out in Bahrain on March 18.

Obviously, the title battle between Red Bull's Max Verstappen and Mercedes' Lewis Hamilton will take centre stage. However, there wasn't a shortage of content from the other teams.

It is reasonable to assume season four will contain at least nine episodes, based on previous seasons. However, there is the possibility there could be more because of the sheer amount of content from last season.

Here are the main storylines we expect to be covered from each team.

You can expect Mercedes' side of the headline battle against Red Bull to be told. Both Lewis Hamilton and Team Principal Toto Wolff were interviewed and no doubt would've been questioned about their thoughts as the battle unfolded.

Naturally, the collisions in Silverstone and Monza will be a focal point, but those collisions shouldn't take away from Hamilton's highlights. This includes his late-season dream run, including victories Brazil where he overcame a weekend of adversity, Qatar and Saudi Arabia to tie up the championship heading into Abu Dhabi.

However, Hamilton's low moments will be visited too, namely his Baku blunder and that fateful, controversial decision in Abu Dhabi which Mercedes protested. We would also like to go behind the scenes of those protests however, it is highly likely filming was prohibited.

The Hungarian Grand Prix, after Abu Dhabi contained the most drama after Valterri Bottas caused a multicar collision on the first lap. Because of the sheer amount of action from that Grand Prix, it's likely to feature heavily.

Other moments we hope to see covered include George Russell's signing, Hamilton's knighthood, and Bottas' farewell.

The most notable thing about Drive to Survive season four is an absence of interviews from world champion Max Verstappen.

It's a difficult task producing a season revolving around the Hamilton-Verstappen battle with one party opting out. However, Team Principal Christian Horner will front the cameras offering his, and Verstappen's perspectives.

Verstappen had plenty of golden moments this season, including the Dutch Grand Prix's return and his victory there, the grand slam in Austria, hat-trick in the French and Austrian triple header, and that final lap in Abu Dhabi.

As stated above, the Silverstone and Monza incidents will be revisited, but from a Red Bull perspective. Additionally, Verstappen's controversial wins in Spa and Abu Dhabi should receive some exploration.

Other moments we hope to see are Sergio Perez's home race in Mexico and Honda's short-lived exit from F1.

While the Formula 1 world was captivated by the Mercedes-Red Bull battle, Ferrari had its own against McLaren for third place. The Italian team succeeded in the battle and turned 2020’s subpar performance around.

Carlos Sainz has links to both sides after signing with Ferrari following 2020. He delivered his best season yet, being the only driver to cross every finish line and win points in all but two races. His lowest finish was 11th in Portugal and France.

The Spaniard’s transition into Ferrari was a smooth operation and makes for an interesting storyline. The newcomer vs home-grown talent narrative could be pushed for Ferrari, given Sainz outperformed a luckless Charles Leclerc.

Another storyline includes Leclerc’s Monaco Grand Prix curse, which continued in 2021. The Monégasque driver qualified in pole position but did not start his home race after crashing in Q3.

One episode should feature the Monza 1-2 finish, and centre around Daniel Ricciardo's redemption arc. After moving from Renault, Ricciardo struggled to find his feet and was outperformed by teammate Lando Norris.

However, a Ricciardo of old re-emerged that weekend to seal a long-awaited victory. It was a joyful moment amid the intense championship drama and will be a fun moment to relive.

The other episode will focus on Lando Norris, whose season got off to a flyer. In the first 10 races, he had nine top-five finishes, including three podiums.

Many thought the young Brit’s first win would come in Russia after locking in pole position. However, it wasn’t meant to be and was one of the most heartbreaking moments of the season.

McLaren has two very popular drivers, so these episodes should deliver.

Heading into 2022, Renault rebranded itself to Alpine and parted ways with Team Boss Cyril Abiteboul - signifying a new era. Two-time world champion Fernando Alonso returned to Formula 1 after a two year-hiatus to team up with Esteban Ocon.

Alpine’s first race didn’t go accordingly, as Alonso retired and Ocon was hit by Sebastian Vettel. However, they continued to finish in the points over the next fifteen races.

Hungary will be the focus for Alpine as Ocon won his first race, but also because of Alonso’s brilliant defence and teamwork to hold off Hamilton and enable Ocon's win.

Ocon’s journey to F1 is well-documented. His family sold their house and lived in a caravan to afford his karting career. Revisiting his upbringing following the win is a heartwarming way to tell the story as fans see his family’s sacrifices pay off.

Despite Alpine being a middling team in 2021, it definitely has some intriguing storylines.

Pierre Gasly and Yuki Tsunoda’s off-track chemistry was something fans took note of in 2021. Seeing this dynamic develop and play out on the screen, as the two drivers had vastly different seasons will make for an intriguing watch.

However, don’t be surprised if Netflix manufactures a rivalry between the two based on Tsunoda’s post-qualifying comments in Spain. We’ve seen this happen before with Ricciardo and Verstappen in season one, and Sainz and Norris in season three.

Tsunoda has an impressive resume behind him, so following his transition into F1 off the back of his successful F2 campaign is one angle they could take.

Despite being the best performing rookie, he had teething issues earlier on. However, his progress throughout the season was evident, culminating in an overshadowed fourth-place finish in the Abu Dhabi finale.

Meanwhile, Gasly continued to redeem himself after being dropped by Red Bull, finishing in the points in nearly every race he finished and making the podium in Baku.

There are plenty of angles Netflix can take with Alpha Tauri. Let’s hope they choose the right ones.

There was a second rebranded team on the grid in 2021, as Racing Point became Aston Martin Racing. Billionaire Lawrence Stroll brought a 16.7% stake in Aston Martin, enabling Aston Martin to return to the F1 grid for the first time in over 50 years.

The team didn't perform as well as it did as Racing Point in 2020, scoring less than half the points it scored in 2020. However, the sky is the limit as the team has shown it can be successful and shouldn't be counted out.

There was some success, as four-time world champion Sebastian Vettel took the podium in Baku, and finished in the top five in Spa and Monaco. However, he was disqualified after the infamous Hungarian Grand Prix for a fuel infringement.

Last time Aston Martin was in the sport, it lasted five races before withdrawing. Because of its previous failure, it's hard not to see season four ofDrive to Survivecreating a redemption arc storyline as Lawrence Stroll, his son Lance, and Vettel look to bring the name F1 glory.

2021 was a much better season for Williams after going without points in 2020. Both Nicholas Latifi and George Russell scored their first points in a Williams car at the Hungarian Grand Prix.

Additionally, Russell made his first podium in Belgium after beating Hamilton to qualify P2. Later this season, it was announced Russell would join the seven-time world champion at Mercedes in an all English lineup for 2022 onwards.

There will be much interest in this story because of the magnitude of the move and the fact it was 2021's worst kept secret.

If Netflix were to explore social media's reactions to Abu Dhabi, they have two drivers with different stories to look at.

The Williams drivers were also involved in the Abu Dhabi Grand Prix final lap controversy in different capacities. Latifi was severely impacted by social media abuse and death threats after crashing and bringing out the safety car.

It's a sad day when a champion retires from any sport, with Formula 1 being no exception.

2007 World Champion Kimi Raikkonen called time on his career in 2021 at season's end, with fellow countryman Valtteri Bottas replacing him in 2022.

Affectionately known as 'The Iceman', Raikkonen's media persona and team radio messages were iconic, but his passion for racing alone was even greater. A man of few words, Netflix won't expect to get a lengthy interview, but nonetheless, it's a story they need to tell and a career they should reflect on during season four ofDrive to Survive.

His final race ended in a disappointing manner, crashing out and forced to retire. Despite this, fans showed their love and appreciation by voting him Driver of the Day.

The theme of 'Change' will certainly be explored when Alfa Romeo is featured in Season four of Drive to Survive, because of the two outgoing drivers.

The Schumacher name returned to the F1 grid for the first time since 2012, with Mick Schumacher, with the son of seven-time World Champion Michael Schumacher racing for Haas.

It wouldn't be surprising if they opted to go down the legacy angle, as Mick enters his rookie year in F1.

Michael Schumacher is in an ongoing battle with traumatic injuries attained through a skiing incident. Mick racing in F1, and even having a spin in his Dad's old car is a heartwarming story and one Netflix shouldn't ignore.

Fellow rookie Nikita Mazepin's F1 career started with controversy as a damning Instagram story put him in fans' bad books. Netflix could delve into his horror rookie season, and look at how he responded to it off the track.