What is an NFT and why do I keep hearing about them? 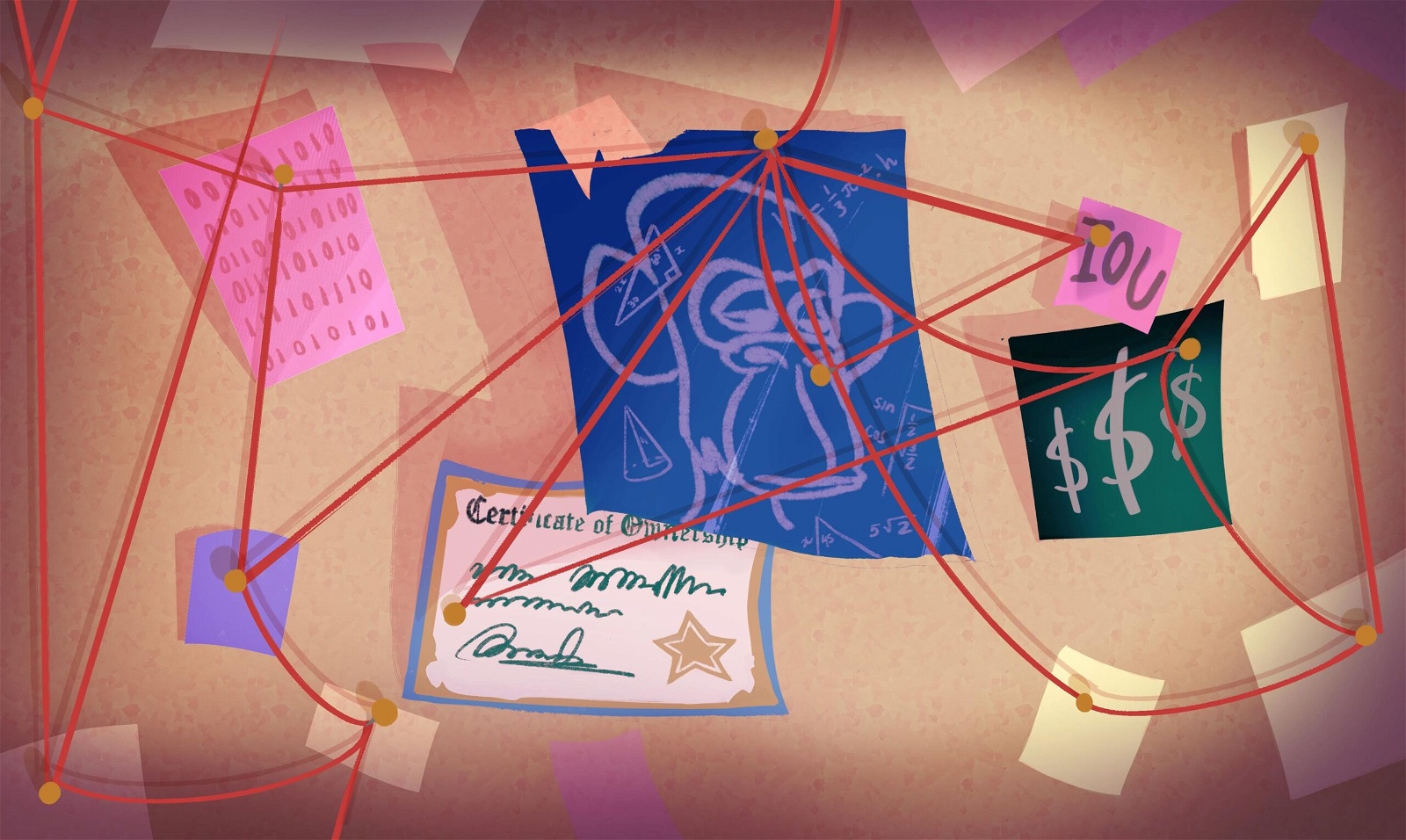 With the initial wave of NFT hype finally dying down a little, it is time to try to make sense of the social, cultural and economic value. It is hard to understand NFTs because they genuinely make no sense, but we are going to try our best.

Give me the tl;dr on NFTs

Fungible just means you can't think of these things as currency that you can just use in transactions back and forth. A Bitcoin is a Bitcoin is a Bitcoin. But each NFT is its own special little snowflake that is traced back to you and then whomever you sell it to.

When I buy an NFT what do I actually get?

To own an NFT is to have authentication that you own something, but that something only exists in the digital realm. The digital asset itself can take many forms - a gif, a jpg, a virtual bag (you know how you buy extension packs for The Sims to get the funky exclusive hairstyles?). Fundamentally, they are characterised as being intangible and (often) platform-bound.

What does ownership mean? You own a token. It's yours, but people don't necessarily know it is yours. You don't own the copyright to the asset. You can control what happens to your 'authentic' version of the asset, but you can't prevent other people from making/sharing/remixing 'copies' of it however they wish.

Your monetary transaction which is symbolic of the acquisition of an NFT, gives you as much ownership over that asset as it would a star.

When you buy a star (or the right to name a star), you hand over a sum of money, and in exchange you get a little certificate that claims that you now own some astral object that exists light-years away.

From there on there is not much you can do with your newly acquired shiny pretty thing. It's not like you can visit it, develop properties on it, or prevent other people from doing so - it's too far away.

Both you and the star just continue coexisting as you had been before you received your fancy certificate. Maybe you get to give it a funky new name but no one else in the world (including NASA) is obligated to use said name.

Like cryptocurrency, it uses blockchain technology. Therefore, no central database, no authority overseeing the processes (like a bank).

Well, personally I don't find them sexy, but here's what I’d say makes NFTs appealing to those that are interested in them:

Like cryptocurrency, the concept of NFTs is rife with tech buzzwords, such as decentralisation, crypto, peer-to-peer, new frontier of art, unregulated market.

There is the potential to “disrupt” an industry by offering a solution that does not actually address the issue said industry is facing.

Are NFTs really worth the money being dropped on them

First of all, #notallNFTs. Most NFTs are worth not much at all. Obviously, you're here because you've heard the stories of a select few cases where NFTs have sold for millions and want some answers.

Here's the deal: tech bros love hyping up their own innovations. They also potentially feel left out as a class of nouveau riche from a source of cultural capital (art). The hype comes from its potential to be the 'next big thing' for art and ownership.

But also, like, what is value anyway? Online content generates value from being shared/copied/responded to/remixed to be distributed to as many eyeballs as possible, and that's still going to happen regardless.

Attempts to convert that cultural value into a monetary value is possible, that's the entire premise behind merchandising and licensing. The problem comes when these attempts at making a profit are done on an unregulated platform in the medium of NFTs.

When you order an NFT online...

Before they well and truly took off, here's what NFTs were sold to us as:

Artists/creators can receive payment for their online creations:NFTs would allow artists to sell directly to their customers, cutting out any middlemen who might eat into their earnings (*there are still fees that you have to pay for the transaction, like gas fees).

Artists can financially benefit from the secondary sales of their works: It is a common occurrence in the art world that an artist may see their works flipped many times over on the secondary market, only to see all that money to be pocketed by the collectors. With NFTs, secondary market royalties are already incorporated into the system and get automatically distributed when a sale occurs.

Easily accessible sale records:Decentralised peer-to-peer data networking means that the sale records are outsourced to all of the platform's users. This makes it more difficult to modify or delete the data that already exists in the blockchain.

In theory, this is a useful system for selling digital art, which has proven true in some cases.

There have been quite a few stories of individuals who have either created or featured in old viral memes being able to seek some financial benefit from the sale of said meme as an NFT.

This points to some larger issues around who gets to profit off/benefit from viral content. However, it is also merely the byproduct of an online ecosystem in which users don't really care about crediting original artists of the cool images they see and share.

Perhaps NFTs do offer a solution for such a conundrum but there are also a few other issues at hand here.

...When the NFT arrives

When NFTs finally took off, this is what actually happened:

Art theft with no recourse:Currently, the only thing that matters in terms of determining the authenticity of an NFT is who minted it first. And in most cases, that individual is not the creator of the work. The platforms don't care, most of them don't require you to verify you own what you're minting. That seems like a problem doesn't it?

Hackers gonna hack:turns out, NFT platforms can still be subject to phishing attacks and other forms of security breaches. And unsurprisingly, intangible art is not that difficult to steal once you're "in".

You are a small fry going up against every celebrity that wants to make a quick buck:as soon as celebrities started jumping aboard the NFT hype train, it was truly over for us peasants. How are you supposed to realise your dream of becoming an NFT gazillionaire with your interesting artwork, when Twitter founder Jack Dorsey can just sell his tweets?

Frauds and scams galore:aside from the fact that NFTs themselves are scams, this is just classic internet shenanigans and should come as no surprise to anyone.

Impersonating artists and celebrities? Check. Minting the same NFT on different blockchains? Check. Artificially inflating the prices of your own NFTs? Check.

And you can do nothing about it:The appeal of NFTs and crypto, in general, is the fact that it is decentralised and anonymous. And because this is the internet, inevitably that meant that bad faith actors were going to come along.

Which then causes problems, because you have no robust systems of recourse when you do get screwed over. The main way that people have been able to seek any semblance of justice is either via kicking up a big enough fuss on Twitter (which only works some of the time) or seeking the aid of centralised systems like banks to bail you out of this mess.

Some of these issues are slowly being addressed by platforms such as Rarible and OpenSea. However, it doesn't inspire hope that these countermeasures were not built into their systems to begin with.

WOMEN IN GAMING AT THE YARRA RANGES REGIONAL MUSEUM

And that's not all!

Energyconsumption:the way that the NFTs and all forms of cryptocurrency are "mined" is through doing a series of convoluted math problems quickly. With more and more people mining and minting, the computers need to get exponentially quicker.

Because speed is of the essence, naturally that requires computers with very strong processing power, which therefore require a lot of energy to run and maintain. And as many of them as possible.

Which is how we have ended up with warehouses packed with powerful computers solving math problems and creating massive amounts of pollution while at it. The carbon footprint of NFTs has now already exceeded the energy consumption of entire nations.

Resources expenditure:Another side effect of needing a lot of powerful computers is that it requires a lot of hardware. The e-waste amassed from always needing the newest fastest computer is an issue in itself, especially when there are still no good solutions on how to dispose of it safely.

We are also still seeing shortages in graphics cards because of crypto-miners. The pandemic also hasn't helped.

This is a cause of frustration for anyone whose jobs require considerable computer processing powers like video editors, graphic designers... and gamers. So you know, we really are all suffering here.

Money Laundering:it is no surprise that a decentralised, anonymous platform that deals with large sums of money could become rife with money laundering.

Even if the transactions are easily visible on the blockchain, it does not mean that they cannot be obfuscated by moving them through a tangled web of transactions. This kind of stuff happens in art all the time, especially with assets that's value can be volatile.

NFTs are a pyramid scheme, and getting in now means that you are just scrabbling at the base for pennies.

You play NFTs the way you play stocks, which is that the rich have tricks to use them to get richer, and the rest of us rely on luck/hoping for the best/letting this thing consume our lives in an unhealthy way in the hopes of getting rich (yes I know this sounds like gambling, that's the point).

Here we have a clear indication that this class of people have money to burn and instead of putting it towards public infrastructure, their taxes, or actually doing good for people in need in ways that are productive and demonstrate a modicum of consideration for those less fortunate than them, they have spent it on a bunch of jpgs.

Also, some of us have seen our furry art we posted on DeviantArt get turned into NFTs that other people are profiting off.(Disclaimer: The author of this article has not experienced this themselves, but feels righteously indignant for those who have).