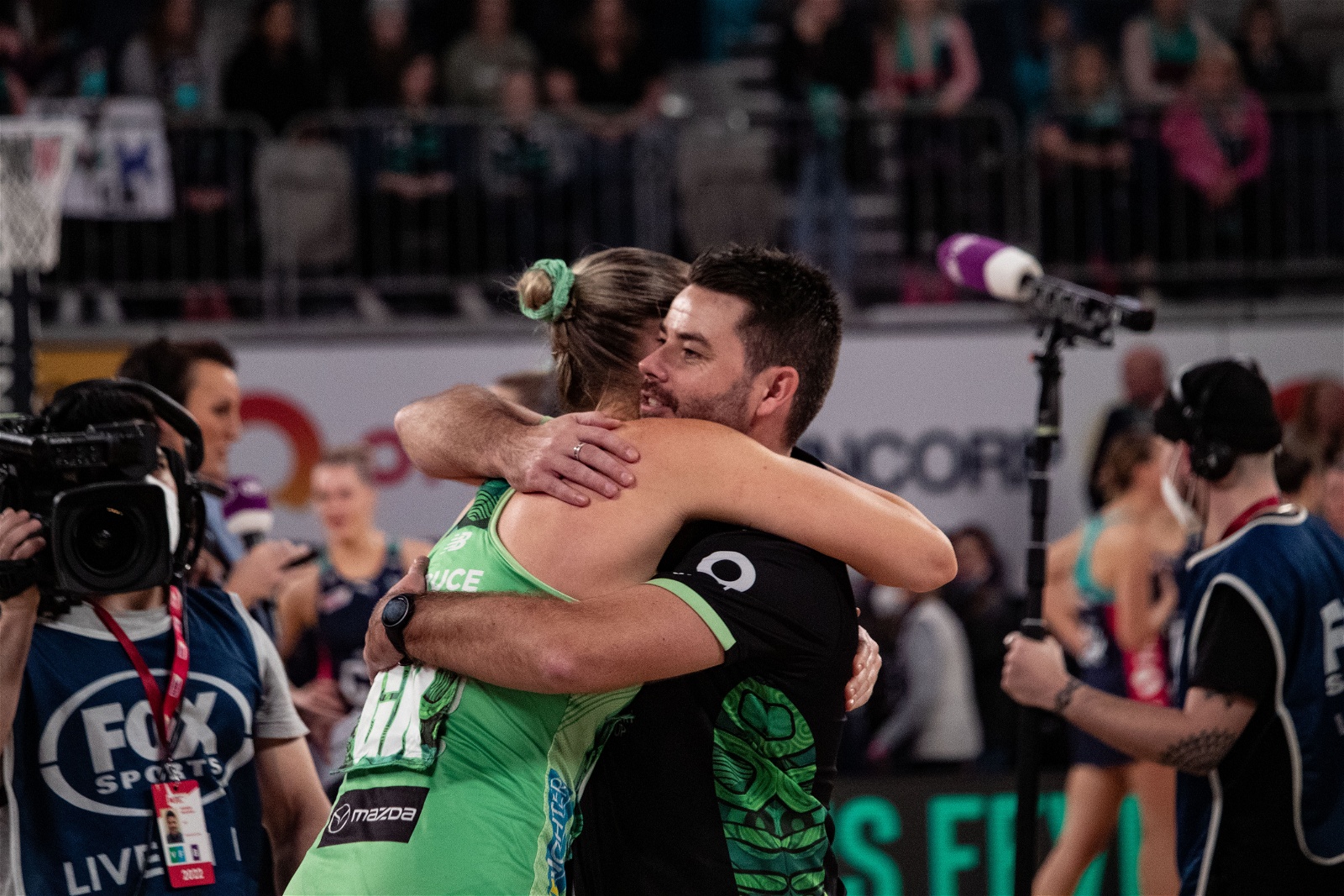 The West Coast Fever started the Suncorp Super Netball finals series in blazing fashion, with a nine goal win over the Melbourne Vixens.

The West Coast Fever started the Suncorp Super Netball finals series in blazing fashion, with a nine goal win over the Melbourne Vixens.

The West Coast Fever have flexed their muscles in intimidating fashion, starting off the Super Netball finals with a bang.

The Fever jumped out to an early lead, dominating the early exchanges, as the Vixens showed nerves and immediately the Vixens had a three goal lead, before the Vixens immediately pegged them back.

The Vixens continued to fight the Fever, and their nerves, taking it to 9-9 halfway through the first quarter.

From there, disaster struck, as the Fever reeled off nine goals in a row to make it 18-9 before the Vixens would tick over the score again.

The Vixens were able to get on a roll to start the second quarter, and start to bring the game closer, but the Fever found a way to stop the momentum. The closest the Vixens got in the second quarter was nine goals, and it would be as close as they would get for the rest of the match.

The second quarter was a stamp of authority by the Fever defence, as Sunday Aryang had two gains, and Courtney Bruce and Jess Anstiss each had one.

The Vixens meanwhile, had eight turnovers for the quarter, as they fell further behind the Fever, going into the halftime break down 12 goals.

It didn't get any better following the half time break, as the Fever scored 13 goals to the Vixens' seven in the first ten minutes of the quarter, blowing out the lead to 19.

The Vixens brought Rahni Samason on to finish the third quarter, and she unleashed a barrage of super shots, bringing the margin back to 14 at the final break.

While the final score says that the Vixens dominated the final quarter, with seven and a half minutes to go, the lead was 21. Samason again unleashed in the final quarter in an impressive display to cut the margin in half, as she finished with 10 successful super shot attempts.

Despite her late heroics, the Vixens were too far behind, and the Fever coasted to a comfortable win, securing a place in the grand final that was already confirmed for Perth.

After the match, Vixens coach Simone McKinnis lauded Samason's shooting efforts, saying "I think she finished the game really well, super shooting in that last quarter, and it's great that she’s out there now. We can utilise Rahni on court, which is a positive for her."

McKinnis explained that she had used all ten players tonight, and a number of different combinations to try and get some positive change going for her side when they were struggling.

"It's all combinations that we’ve used before. It was just looking to see and trying to spark that change and change that momentum. At different times people did their role and did a good job, but I just think that we were chasing, we couldn’t get ball, we weren’t playing with confidence in the attack end.

"It's disappointing but we’ve got to have a chat about that because it's a big week for us again - we’re fortunate enough to get another go at it."

McKinnis was at a loss to explain the cause of the Vixens' struggles tonight, but could see the match in front of her unravelling.

"We weren’t really on our game right from the start. We just didn’t seem to step out there with confidence, which we should have.

"We had a good week and felt really good, but we were a little bit hesitant and let them get a good start, and from there it was chasing from there."

The Vixens will play in front of their home crowd in the preliminary final next week, in what McKinnis hopes will be an improved performance, as the Vixens aim for a grand final rematch with the Fever.

"I would hate to be finishing a season with a game like that today, and I know we’re better than that, and we will be putting out better than that next week," McKinnis said.

On the other side of the coin, Fever coach Dan Ryan was ecstatic with his side's performance, as they guaranteed an appearance in a home grand final in his first season at the helm.

"I’m incredibly proud of the performance. We had a quiet confidence about ourselves going into todays game and we certainly knew that we were slowly turning corners over the past couple of weeks.

"I'm just so proud of every single player to show up and step up in a major semi final, and obviously by far our best performance of the season, and no better time to do it than in the pressure of a semi."

Ryan credited the team's hot start to the lessons learned from the Fever's two losses to the Vixens over the course of the season.

"Our major reflection was that you can’t start poorly ad expect to beat them. We wanted to get on the front foot early, and I thought our first five minutes was exceptionally strong, and just our ability to execute the game plan from the beginning and back it in and keep trusting it was outstanding today.

"We really showed that we were meaning business after the first 15 minutes and really reaped the rewards as the game went on. I think the workmate of every single player in front of Jhaniele today was just outstanding.

"They ran themselves to a level of most of them cramping, and they just kept gritting their teeth and digging in and finding the extra drive to ensure that we were playing high-level disciplined netball, and Jhaniele reaped the rewards of some really brilliant feeding and decision making from our front line. I thought all of them across the court won their positions and did a fantastic job."

It wasn't all rosy for the Fever though, with Samason's burst late in the match a reminder of how precarious a lead can be.

"You look at the last quarter, and their capacity to just bomb two pointers, and that they trimmed the deficit in half very quickly is the danger of the way that the game is played at the moment.

"You’re never comfortable, you’re never relaxed and talking to the players at the end of the game, they were all just pushing to that very last second, so no relaxed moments in a 60 minute battle.

"I think we can refine some of our strategies and come up with a couple of new ways to do things as well. We will be really proud of our performance today to give ourselves the chance in the grand final, but we know we will have to have a few things up our sleeve and improve some other areas of our game too.

"Irrespective of who we play, we know we need to take another step forward come grand final day."

The Fever will now travel home to Perth, knowing no further travel is required this season, and that they can prepare for two weeks for the grand final, in the hope of finally breaking their premiership duck as a club.