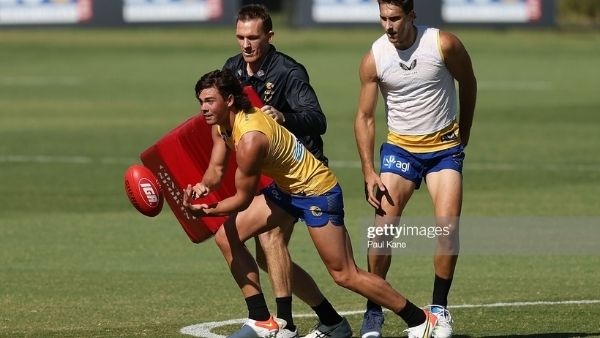 The West Coast Eagles are going into 2022 optimistically and are planning to implement some changes for the upcoming season.

The West Coast Eagles are going into 2022 optimistically and are planning to implement some changes for the upcoming season.

The West Coast Eagles are looking to bring in a new style of play for 2022 after a disappointing end to the 2021 season which saw the side miss finals for the first time since 2017.

Adam Simpson fronted the media today to talk about the potential changes in West Coast's game as well as the situation involving star forward Jack Darling.

Despite many not having West Coast in their predictions come September, Simpson says that hasn't deterred his side from making the most of this pre-season.

"We're training on some different methods, we've got some new coaches, there's a new environment different feel at the club from a football point of view.

"We're excited, it's actually the time to be up and about and excited. Despite the doomsday sayers and the predictions, we've sort of had that before in the past and worked through it.

"The environment here is one is of excitement so we're training pretty hard and training well so the results need to take care of themselves of course but we're going in optimistically."

Some of the changes will happen on the field as well with the club looking at tweaking their game style.

"We're tweaking a couple of things with the way we move the ball the way we defend and our contest method as well. Some new coaches in the environment who've brought new ideas and new opportunities to train."

Simpson wasn't giving too much away as to what these changes would look like when the Eagles take the field come the practice matches early next month.

"Some people won't notice any change and some people will notice significant change it depends on how deep you look, we're still working through what our best version looks like."

The Eagles are looking to be without Darling for the season due to thevaccine mandatebut Simpson is still hoping he'll be back for round one.

"Our plan is to get him back, he was training really well until he left the club.

"Oscar Allen is obviously a part of our future, Josh Kennedy playing around for another year is important for us, Jakey Waterman.

"It's left a little hole we need to work through before we start playing games but hopefully we get him back."

Although Darling may be on the outer come round one there have been new additions to the Eagles make up for 2022 with the likes of draftee Campbell Chesser hitting the ground running.

The kids have been great, most of them got through the pre-Christmas phase, a few hiccups with injury.

Campbell [Chesser] has been really good for us, spend four weeks on the road to get here and he's hit the ground running so he's been really impressive.

"Sam Petrevski- Seton has joined the club as well, he's played 93 games so he's got some experience.

"Some of our younger and up and coming players have had some really good blocks of the preseason, that tells me they've improved so we'll bring it all together over the next couple of weeks but hopefully we get a good looking side come round one."