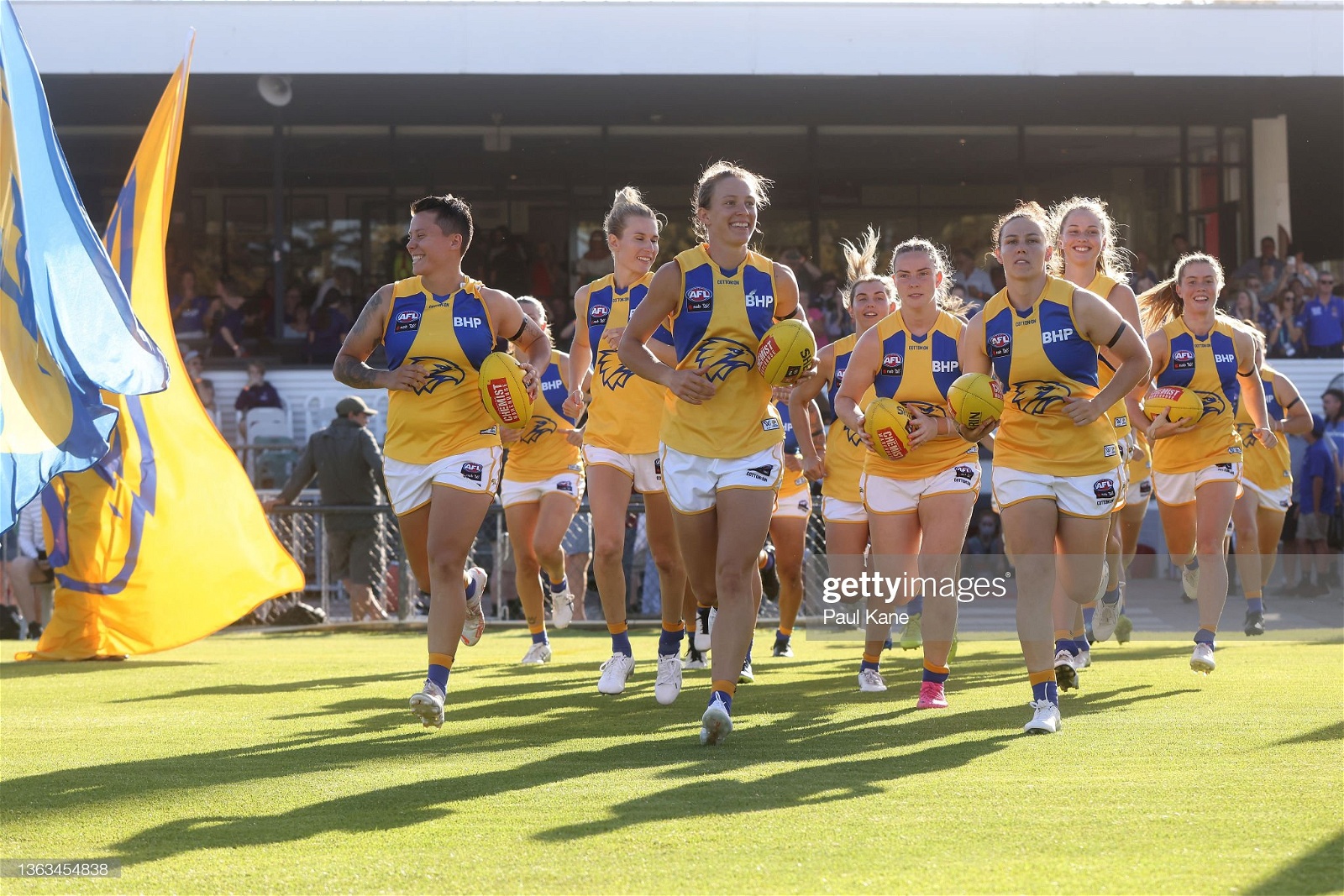 Looking for growth and belief beyond last season's wooden spoon, will the Eagles be flying high this season?

Looking for growth and belief beyond last season's wooden spoon, will the Eagles be flying high this season?

The West Coast Eagles AFLW have struggled out the gates since their addition to the league in 2020, with their last three finishes in the bottom 3. This year with even more teams, the Eagles will look to at least fly slightly higher than others whilst building their inexperienced squad.

The West Coast Eagles have been known to be a spirited team in their time in the AFL, but finishing bottom of the ladder last year amidst an injury-filled season has meant that any momentum they may have had coming into the year has stalled, if not halted. It does not help that several of the Eagles' more experienced players called time on their careers between seasons.

The preseason for the club, however, has gotten some promising results, with a victory over the expansion Hawks and a narrow rain delay loss to Freemantle. The new draftees and the new look midfield group alongside mainstays Swanson and Hooker will lead to plenty of intrigue in the Eagles' campaign, hoping for a cohesive winning unit that's alluded them these past few seasons.

With landmark draft acquisition Ella Roberts being the off-season story for the Eagles, the focus of this season will be on development and growth in their game as they hope to begin fulfilling some of the enormous potential their young players have.

The Eagles fell victim to many losses, some of which by very dramatic margins, including the 60-point loss to the Bulldogs. The Eagles managed a round 5 victory against St. Kilda in February, marking their first victory outside Western Australia in a scrappy 22-20 affair. Thirty-nine disposals and ten tackles between the leaders of Swanson and Hooker allowed for the midfield battle to be won in that game, and the midfield will again be the key for the Eagles to show improvement and growth this season.

It's perhaps a little unfair to put 'everywhere' in this section. Still, the Eagle's struggles from last season were apparent concerning low disposal and tackle rates, minimal inside 50s and dramatically low handball numbers, averaging only 62 a game.

To put this into context, the next lowest average was the Dockers' 68.8 handballs per game. Being able to exchange the ball quickly and effectively in close proximity is key to raising disposal numbers and forward 50 entries, so upping their general disposal numbers alongside more effective rover technique should be the focus for the Eagles this coming season.

As usual, All-Australian Emma Swanson and veteran Dana Hooker, the key midfielders for the Eagles, will provide the culture of this improvement. The 29-point preseason victory over the Hawks was encouraging with the improved centre clearances and much more dynamic forward play than in the previous season, with Irish import Aisling McCarthy, experienced forward Aimee Schmidt and new draftee Mikayla Western all posting first-half goals. Priority signing Kate Bartlett and young returning forward Shanae Davidson combined well with the strong ruck to get on the end of 4 open play goals between them in the 2nd and 3rd quarters.

Finishing with 3 in the Hawks outing, Bartlett will look to be a catalyst for West Coast's improvement, alongside mainstay Imahra Cameron, who managed six goals last season in an injury-limited campaign.

Note: Lauren Wakfer (knee) and Evie Gooch (wrist) are both on the inactive list with long-term injuries as of this writing.

HITOUTS. Near the bottom of almost every stat regarding disposals, goals and behinds, one area where the Eagles are perhaps fittingly flying high is in the ruck. Last year the Eagles were in the top 5 for hit outs, and with the strong ruck work of now retired Laurie, developing young player Lakay and the recruitment of Hartill and the Wakfer sisters suggest this will remain a strength in the upcoming season.

As we mentioned earlier, with respect to rover issues, the first step to obtaining possession in AFL is to win hit outs, giving your team the best chance to get possession and significant disposals.

Even in their heavy losses last year, the Eagles often won out in the ruck, getting the most touches to balls in and centre bounces. This aspect of their game hopefully allows them to strengthen the other areas to create more meaningful possession and forward opportunities for the growing forward group.

DISPOSALS. Bottom in handbells, as mentioned earlier and consistently in the bottom 3 for overall disposals, moving possession of the ball is what the Eagles need to work on. This starts with obtaining possession, of course, and while the tackle numbers aren't great, the hardworking midfielders will hopefully get on the end of some of those successful hit outs and then move the ball quickly.

Another element to this weakness is accuracy, as working their way into the forward half, the Eagles often miscued kicks and gave away possession. Tightening the accuracy, working on decision making, and quick decision making will be the key this season.

Ella Roberts: The first pick out of WA in this season's draft and a player that some have touted as the best player in the draft, young midfielder Roberts will be looking to make an immediate impact for the struggling Eagles. The two-time Under 18s MVP for WA in the national championships, Roberts' skill and versatility will bring an extra edge to the midfield and forward line.

Perhaps cautiously, this season will again be a bit of a struggle as the young players try to come to terms with playing at the professional level. The high turnover from last season will naturally bring some chemistry issues, but with the expansion, the Eagles will be hoping to get at least two wins on the board this season. It remains to be seen whether this will be achieved or enough to bring them off the bottom, but growth is slowly happening.